Sherry reviews. Sherry takes off at M&S. 5th December, 2013 by Rupert Millar Ahead of the Christmas sales season, M&S has reported that Sherry as a whole is already up by a third on last year, while PX is up 180%. 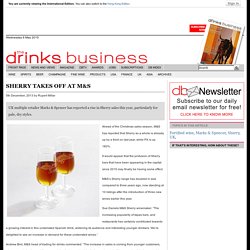 It would appear that the profusion of Sherry bars that have been appearing in the capital since 2010 may finally be having some effect. M&S’s Sherry range has doubled in size compared to three years ago, now standing at 10 listings after the introduction of three new wines earlier this year. Sue Daniels M&S Sherry winemaker: “The increasing popularity of tapas bars, and restaurants has certainly contributed towards a growing interest in this underrated Spanish drink, widening its audience and interesting younger drinkers. We’re delighted to see an increase in demand for these underrated wines.”

Andrew Bird, M&S head of trading for drinks commented: “The increase in sales is coming from younger customers, who are venturing beyond the cream styles that were drunk by their grandparents. Sherry Wine Tasting, Time to Save Money - Episode #303. Ehrmanns puts spotlight on vintage Sherry. The Williams & Humbert bodega Due to be unveiled at the Big Fortified Tasting in London on 24 April, the launch will feature a fino en rama 2006 and single cask oloroso 1982. 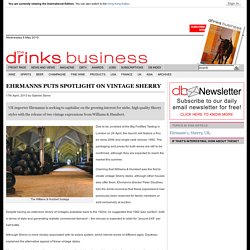 The packaging and prices for both wines are still to be confirmed, although they are expected to reach the market this summer. Claiming that Williams & Humbert was the first to create vintage Sherry styles, although other houses also offer them, Ehrmanns director Peter Dauthieu told the drinks business that these expressions had previously been reserved for family members or sold exclusively at auction. Despite having an extensive library of vintages available back to the 1920s, he suggested that 1982 was ‘perfect’, both in terms of style and generating realistic commercial demand – the oloroso is expected to retail for “around £45” per half bottle. Although Sherry is more closely associated with its solera system, which blends wines of different ages, Dauthieu explained the alternative appeal of these vintage styles. 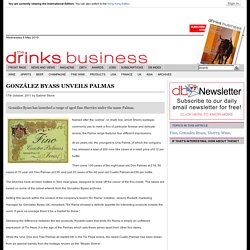 Named after the “palma”, or chalk line, which Sherry bodegas commonly use to mark a fino of particular finesse and delicate aroma, the Palma range features four different expressions. At six years old, the youngest is Una Palma, of which the company has released a total of 200 nine litre cases at a retail price of £12 per bottle. Fino unveils its own Sherry. Fino sommelier Rafa Martin with Javier Hidalgo and the restaurant’s own Sherry After a barrel tasting in Sanlucar de Barrameda earlier this year, Fino co-owner Sam Hart selected an en rama version of the bodega’s manzanilla pasada expression, Pastrana. 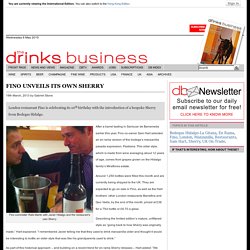 This older style, which is made from wine averaging about 12 years of age, comes from grapes grown on the Hidalgo family’s Miraflores estate. Around 1,250 bottles were filled this month and are currently being shipped to the UK. They are expected to go on sale in Fino, as well as the Hart brothers’ other London restaurants Barrafina and Quo Vadis, by the end of the month, priced at £36 for a 75cl bottle or £6.70 a glass. Describing the limited edition’s mature, unfiltered style as “going back to how Sherry was originally made,” Hart explained: “I remembered Javier telling me that they used to drink manzanilla older and thought it would be interesting to bottle an older style that was like his grandparents used to drink.” Sherry to benefit from boost to marketing spend. Sherry is set to benefit from a boost, after its regulating body successfully doubled its global marketing spend. 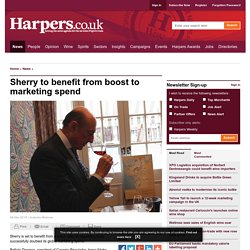 Beltrán Domecq, president of Consejo Regulador Jerez-Xérès-Sherry told Harpers the spend would be increase from nearly €170k to around €300k, partly on the back of increased investment from bodegas for generic promotions on sherry. González Byass releases Tio Pepe En Rama 2015 in the UK. Tio Pepe En Rama 2015, a limited edition unfiltered and unclarified fino sherry which is part of the González Byass portfolio, is set to be released at the end of April in the UK. 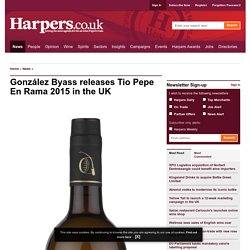 ‘En Rama’ is the local term used by winery workers to refer to the wine in its unrefined state, which has not gone through the normal stabilization and filtration processes most wines go through prior to bottling. Prowein 2015: Gonzáles Byass grows profit 63% through international export effort. Gonzáles Byass has reported a 63% increase in net profit in 2014 over the previous year, which was primarily driven through the expansion of its international exports. 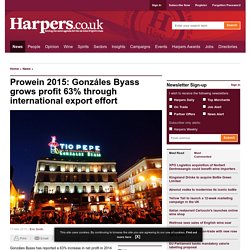 International exports now account for 66% of the company’s business compared to 53% of the business just two years ago. Mauricio González-Gordon, a fifth generation family member and chairman of Gonzáles Byass, spoke to harpers.co.uk at Prowein 2015 about what was driving the success of the company’s brands in international markets. “We find that from the development of the business, we are only a medium sized business, so we need to concentrate on a few key markets that offer the greatest possibilities.