Aquatic Plants. Aquatic plants are a great asset to any garden pond. 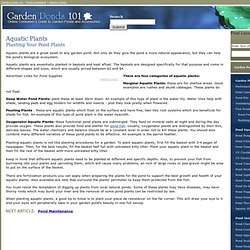 Not only do they give the pond a more natural appearance, but they can help the pond's biological ecosystem. Aquatic plants are essentially planted in baskets and kept afloat. The baskets are designed specifically for that purpose and come in different shapes and sizes, which are usually priced between $2 and $4. There are four categories of aquatic plants: Marginal Aquatic Plants: these are for shallow areas. Deep Water Pond Plants: plant these at least 30cm down. Floating Plants : these are aquatic plants which float on the surface and have fine, hair-like root systems which are beneficial for shade for fish. Oxygenator Aquatic Plants: these functional pond plants are submerged. Planting aquatic plants is not like planting procedures for a garden. Keep in mind that different aquatic plants need to be planted at different and specific depths. You must resist the temptation of digging up plants from local natural ponds.

Freshwater Biome. A freshwater biome is one that many people overlook the importance of. 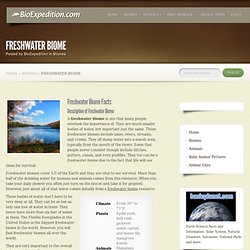 They are much smaller bodies of water, but important just the same. These freshwater biomes include lakes, rivers, streams, and creeks. They all dump water into a marsh area, typically from the mouth of the rivers. Some that people never consider though include ditches, gutters, canals, and even puddles. They too can be a freshwater biome due to the fact that life will use them for survival. Freshwater biomes cover 1/5 of the Earth and they are vital to our survival. These bodies of water don’t have to be very deep at all. They are very important to the overall balance of things. The freshwater biome is a location where there is plenty of nutrition and minerals. 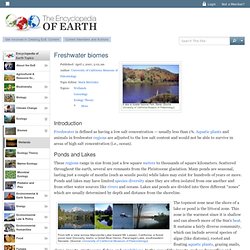 Aquatic plants and animals in freshwater regions are adjusted to the low salt content and would not be able to survive in areas of high salt concentration (i.e., ocean). Ponds and Lakes These regions range in size from just a few square meters to thousands of square kilometers. Scattered throughout the earth, several are remnants from the Pleistocene glaciation. The topmost zone near the shore of a lake or pond is the littoral zone. The near-surface open water surrounded by the littoral zone is the limnetic zone. Plankton have short life spans — when they die, they fall into the deep-water part of the lake/pond, the profundal zone. Temperature varies in ponds and lakes seasonally. Freshwater Marsh Life Animal Printouts. Advertisement. 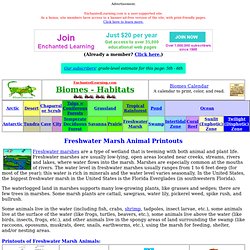 EnchantedLearning.com is a user-supported site. As a bonus, site members have access to a banner-ad-free version of the site, with print-friendly pages.Click here to learn more. (Already a member? Click here.) Freshwater Marsh Animal Printouts Freshwater marshes are a type of wetland that is teeming with both animal and plant life. The waterlogged land in marshes supports many low-growing plants, like grasses and sedges; there are few trees in marshes. Some animals live in the water (including fish, crabs, shrimp, tadpoles, insect larvae, etc.), some animals live at the surface of the water (like frogs, turtles, beavers, etc.), some animals live above the water (like birds, insects, frogs, etc.), and other animals live in the spongy areas of land surrounding the swamp (like raccoons, opossums, muskrats, deer, snails, earthworms, etc.), using the marsh for feeding, shelter, and/or nesting areas. 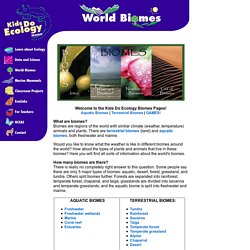 Aquatic Biomes | Terrestrial Biomes | GAMES! What are biomes? Biomes are regions of the world with similar climate (weather, temperature) animals and plants. There are terrestrial biomes (land) and aquatic biomes, both freshwater and marine. Would you like to know what the weather is like in different biomes around the world? How many biomes are there? Games Links to more information: Marsh. Marsh. A marsh along the edge of a small river Marsh in shallow water on a lakeshore A marsh is a type of wetland that is dominated by herbaceous rather than woody plant species.[1] Marshes can often be found at the edges of lakes and streams, where they form a transition between the aquatic and terrestrial ecosystems. 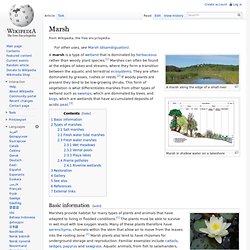 They are often dominated by grasses, rushes or reeds.[2] If woody plants are present they tend to be low-growing shrubs. This form of vegetation is what differentiates marshes from other types of wetland such as swamps, which are dominated by trees, and bogs, which are wetlands that have accumulated deposits of acidic peat.[3] Basic information[edit] Marshes provide habitat for many types of plants and animals that have adapted to living in flooded conditions.[1] The plants must be able to survive in wet mud with low oxygen levels. Types of marshes[edit] A salt marsh in Scotland Marshes differ depending mainly on their location and salinity. Salt marshes[edit] Wet meadows[edit] The freshwater biome. Online exhibits : The world's biomes The freshwater biome Freshwater is defined as having a low salt concentration — usually less than 1%. 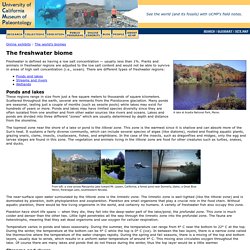