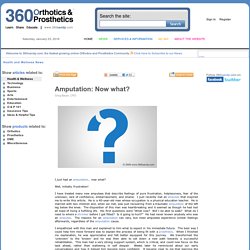 Well, initially, frustration! I have treated many new amputees that describe feelings of pure frustration, helplessness, fear of the unknown, lack of confidence, embarrassment, and shame. I just recently met an amputee that inspired me to write this article. He is a 40-year-old man whose occupation is a physical education teacher. Home : New Zealand Artificial Limb Service. The UK Limb Loss Information Centre: The Amputation Process.

You will arrive at surgery through one of the two paths discussed previously. 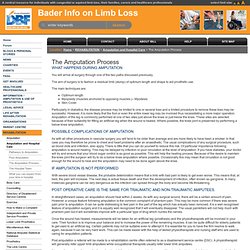 The aim of surgery is to fashion a residual limb (stump) of optimum length and shape to aid prosthetic use. The main techniques are: Optimum lengthMyoplasty (muscles anchored to opposing muscles.)– MyodesisSkin Cover Particularly in diabetics, the disease process may be limited to one or several toes and a limited procedure to remove these toes may be successful. However, it is more likely that the foot or even the entire lower leg may be involved thus necessitating a more major operation. Designing Prosthetics - An Industrial Design Course Project. Joanne Tilley, a Seattle artist with a prosthetic left arm, had long envisioned collaborating with industrial design students to develop innovative designs for prosthetic devices. 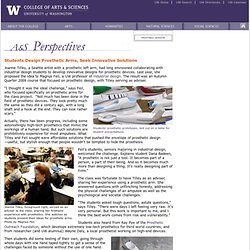 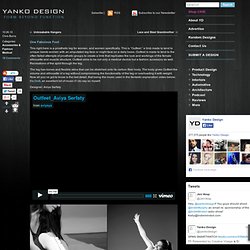 This is “Outfeet,” a limb made to tend to unique needs women with an amputated leg face or might face on a daily basis. Aqua Leg : prothèse de bain , waterproof leg prosthesis.

Research. The 100-Dollar Artificial Leg. For most people, the cheapest way to get from here to there is to walk. 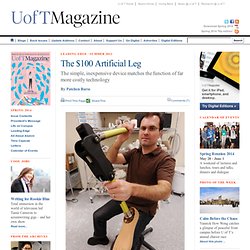 But for millions around the world who have lost a leg, a high-quality prosthetic limb costs more than they can afford. The ability to walk is simply out of their price range. This situation is changing, though, thanks to a prototype for a low-cost prosthesis that not only matches the functions of more expensive technologies, but also is more robust and versatile. ART STUDENT SETH ASTLE DESIGNS THE CADENCE CONCEPT PROSTHETIC LIMB AND BIKE PEDAL FOR AMPUTEE CYCLISTS, WINS U.S. JAMES DYSON AWARD. A concept by Art Center student Seth Astle wins the U.S. portion of the James Dyson Award. 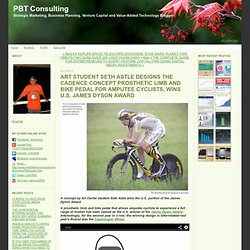 A prosthetic limb and bike pedal that allows amputee cyclists to experience a full range of motion has been named as the U.S. winner of the James Dyson Award. Interestingly, for the second year in a row, the winning design is bike-related--last year's finalist was the Copenhagen Wheel. Cadence is a concept by Art Center College of Design student Seth Astle, who wanted to focus on helping below-the-knee amputees. Since about 47% of amputees are below-the-knee amputees, he knew his solution would be able to help the largest potential audience possible. Toronto scientist develops artificial leg that costs just $50. If a man loses his leg in Sierra Leone — from the blast of a land mine or in a horrific car accident — chances are he will not be able to get an artificial limb. 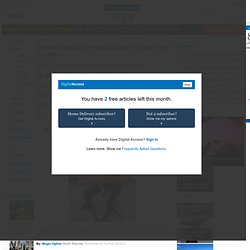 Those used in Canada and the U.S. are too expensive, costing many thousands of dollars each. And if a limb were available, it would likely be too primitive for him to use. But Jan Andrysek, a scientist at Holland Bloorview Kids Rehabilitation Hospital, has developed a cheap and functional artificial limb for those who have had their leg amputated above the knee. It costs just $50. 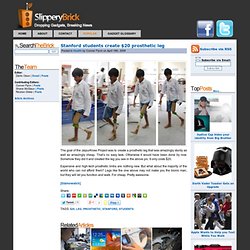 That’s no easy task. Otherwise it would have been done by now. Somehow they did it and created the leg you see in the above pic. It only costs $20. Expensive and high-tech prosthetic limbs are nothing new. Share: FIFTY DOLLAR LEG PROSTHESIS / ALEX SCHAUB ET AL. Intercontinental Collaboration on Prosthetic Design. 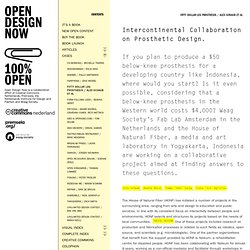 If you plan to produce a $50 below-knee prosthesis for a developing country like Indonesia, where would you start? Is it even possible, considering that a below-knee prosthesis in the Western world costs $4,000? Waag Society’s Fab Lab Amsterdam in the Netherlands and the House of Natural Fiber, a media and art laboratory in Yogyakarta, Indonesia are working on a collaborative project aimed at finding answers to these questions.

Lowcostprosthesis. The first ever 50 dollar prosthesis. Aimee Mullins and her 12 pairs of legs. Scott Summit: Beautiful artificial limbs. The artificial limb/prosthesis : New Zealand Artificial Limb Service. Bionic Soldiers. ‘TOG: the Everest Leg’ to animate the adventurous spirit of physically challenged. In pictures: Prosthetics through time. Customized Prosthetics in CT. Whatever your needs, working with one of our ABC Certified practitioners will assure you get the right prosthesis to help you meet your goals. 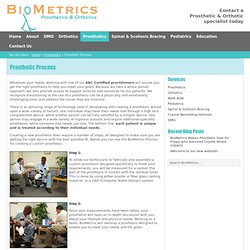 Because we take a whole person approach, we also provide access to support services and resources for our patients. Psychosocial Issues in the Field of Prosthetics and Orthotics - Journal of Prosthetics and Orthotics, 2002. Deirdre Desmond, BA (Mod) Malcolm MacLachlan, BSc, MSc, MA, PhD, DipBus, FPSI, FTCD Abstract The involvement of psychologists in medical settings has grown at a tremendous rate in recent years, with an ever-increasing number of medical environments developing and promoting interdisciplinary collaboration, and thus enabling psychologists to extend their practice beyond the traditional mental health model.

In the context of prosthetic and orthotic practice, we suggest that the realization of the potential of technological innovations in this field may only fully be achieved by equipping prosthetists and orthotists not only with the technical expertise they require but also by fostering an awareness of the importance of psychosocial issues in amputation and rehabilitation, and an understanding of the psychological complexities pertaining to the therapeutic context.