10 reasons to consider switching your company's phone service to Google Voice. Google Voice for G Suite is integrated with other G Suite apps. 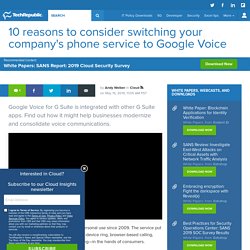 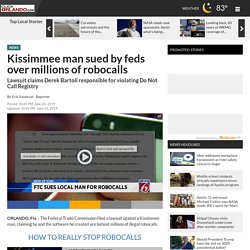 The lawsuit against Derek Jason Bartoli was filed in U.S. District Court on Friday. State records show Bartoli has registered several telemarketing companies using his home address in Kissimmee over the last nine years. According to the lawsuit filed by the FTC, automated calls made by those companies violated federal law. Here's how to stop annoying robocalls. ORLANDO, Fla. - We all hate robocalls and people are always asking News 6 how to stop them. 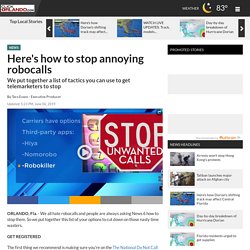 Burner: Android App Redesigned - Free New Number. Why are you getting all those robocalls? FTC indictments explain. Joseph Simons, chairman of the Federal Trade Commission (FTC) nominee for U.S. 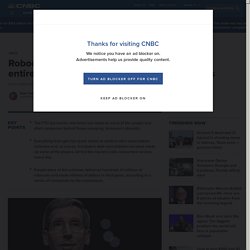 President Donald Trump, speaks during a Senate Commerce, Science and Transportation Committee confirmation hearing in Washington, D.C., U.S., on Wednesday, Feb. 14, 2018. Andrew Harrer | Bloomberg | Getty Images The Federal Trade Commission announced last week a crackdown on robocallers, giving one of the clearest pictures yet of the people and organizations behind the avalanche of nuisance phone calls to consumers.

When to Use a VPN to Carry VoIP Traffic. IT professionals might decide to route their Voice-over-IP (VoIP) traffic across a virtual private network (VPN) for several reasons. 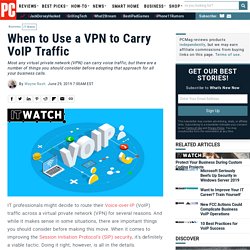 And while it makes sense in some situations, there are important things you should consider before making this move. When it comes to improving the Session Initiation Protocol's (SIP) security, it's definitely a viable tactic. New FCC Actions Could Complicate Business VoIP Operations. If you're operating a multi-line telephone system, whether it's an on-premises PBX system or a cloud-hosted Voice-over-IP (VoIP) system, the US federal government is going to soon require you to make some changes. 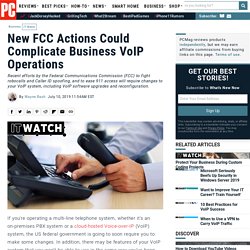 In addition, there may be features of your VoIP system that you won't be able to use in the same way you've been able to use them in the past. These changes, which occurred in a flurry of Federal Communications Commission (FCC) activity this month, will affect everything from how you call 911 to how your Caller ID works. Explore Data. T-Mobile-Sprint Merger Could Mean The End of A Physical SIM Card. The US Department of Justice wants to get rid of physical plastic SIM cards. 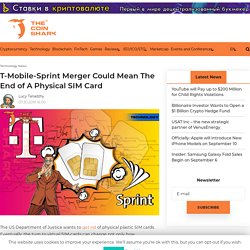 Eventually, the turn to virtual SIM-cards can change not only how smartphones connect to the mobile network, but also the very process of their production. A newly discovered hacking group is targeting energy and telecoms companies. There’s a new hacking group on the radar targeting telecommunications and oil and gas companies across Africa and the Middle East. 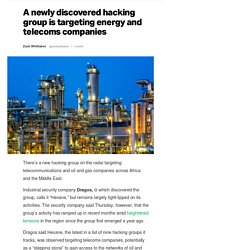 Industrial security company Dragos, which discovered the group, calls it “Hexane,” but remains largely tight-lipped on its activities. The security company said Thursday, however, that the group’s activity has ramped up in recent months amid heightened tensions in the region since the group first emerged a year ago. Dragos said Hexane, the latest in a list of nine hacking groups it tracks, was observed targeting telecoms companies, potentially as a “stepping stone” to gain access to the networks of oil and gas companies. 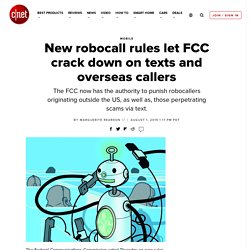 But it's unlikely to be the final death knell for the scourge of robocalls. Instead it's yet another tool in the toolbox to deter the onslaught of calls, the agency said. FCC votes to ban foreign robocalls. How to Make a Phone Farm. Hacker paid AT&T employees thousands to unlock millions of phones, DOJ claims. A 34-year-old man has been accused of paying AT&T employees thousands of dollars over the course of five years to unlock millions of phones tied to the company’s network. 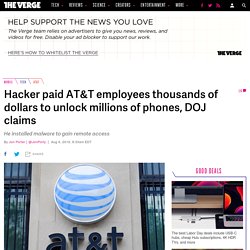 The Department of Justice says that Muhammad Fahd, who has been extradited to the US from Hong Kong, paid one employee over $420,000 over five years to unlock the phones. Initially, the DOJ says that Fahd would simply provide the AT&T insiders with phone International Mobile Equipment Identity (IMEI) numbers, and they would use the company’s internal systems to unlock these devices.

McKinney Man Shows You How to Turn Annoying Robocalls Into Cash - NBC 5 Dallas-Fort Worth. AT&T and T-Mobile fight Caller ID spoofing with number verification system. AT&T and T-Mobile announced a joint anti-robocall initiative today, but they didn't promise any new call-blocking capabilities for their customers. The carriers made a big deal of the partnership, saying in an announcement that they "put differences aside to fight unwanted robocalls for customers.

" AT&T employees took bribes to plant malware on the company's network. AT&T employees took bribes to unlock millions of smartphones, and to install malware and unauthorized hardware on the company's network, the Department of Justice said yesterday. These details come from a DOJ case opened against Muhammad Fahd, a 34-year-old man from Pakistan, and his co-conspirator, Ghulam Jiwani, believed to be deceased. The DOJ charged the two with paying more than $1 million in bribes to several AT&T employees at the company's Mobility Customer Care call center in Bothell, Washington. Operating since 2012 The bribery scheme lasted from at least April 2012 until September 2017. Yelp is Screwing Over Restaurants By Quietly Replacing Their Phone Numbers. US may block undersea cable backed by Google, Facebook, report says. US officials are reportedly seeking to block an undersea data cable backed by Google and Facebook that links Los Angeles to Hong Kong. The Justice Department, which leads a multiagency review panel known as Team Telecom, is opposed to the cable because of national security concerns over its Chinese investor and the direct link to Hong Kong, according to a report Wednesday from The Wall Street Journal.