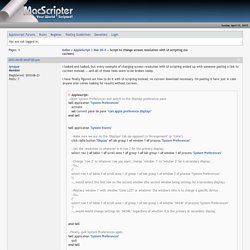 I'm posting it here just in case anyone else comes looking for results without cscreen. Applescript, multiple monitors and maximum window sizes. How to hide all .plist.lockfile files. Apple has introduced an additional type of preference file in Lion, those whose names end in ".plist.lockfile". 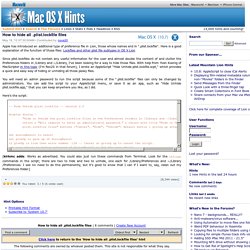 Here is a good explanation of the function of those files: Lockfiles and other plist file subtypes in OS X Lion Since plist.lockfiles do not contain any useful information for the user and almost double the content of and clutter the Preferences folders in /Library and ~/Library, I've been looking for a way to hide those files. The journal of Apple technology. Volume Number: 22 (2006) Issue Number: 3 Column Tag: Programming by Benjamin S. 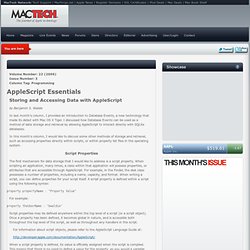 Waldie In last month's column, I provided an introduction to Database Events, a new technology that made its debut with Mac OS X Tiger. I discussed how Database Events can be used as a method of data storage and retrieval by allowing AppleScript to interact directly with SQLite databases. In this month's column, I would like to discuss some other methods of storage and retrieval, such as accessing properties directly within scripts, or within property list files in the operating system.

Fun with the OS X Finder and AppleScript. So a few months ago I finally decided to bite the bullet and switch to a Mac at home after about five years or so of using Ubuntu. 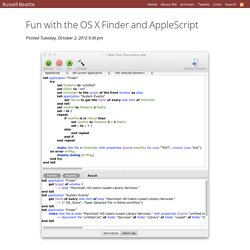 There's lots of random little reasons, but the general idea is that Linux on the desktop is chaos right now and I got sick of fighting with Ubuntu every time there was an update. This, combined with the fact that my son is now old enough to start using a computer regularly and I picked him an old Mac, pushed me to moving over myself. It's just easier to manage, teach, etc. if we're all on the same system. Though some things are definitely more stable or clean, there are lots of little things I miss from using Gnome on Linux. One of them specifically is Nautilus, and the amazing functionality it has like tabs, efficient use of space, intelligent sorting options, virtual file systems for mounting drives over SSH or SFTP, and a bunch of little plugins. 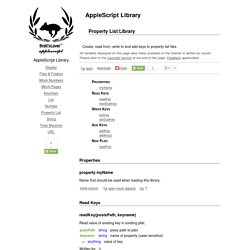 All handlers displayed on this page were freely available on the internet or written by myself. Please refer to the copyright section at the end of this page. Feedback appreciated. Properties myNameRead Keys readKey readSubKeyWrite Keys setKey setSubKeyAdd Keys addKey addKey2New Plist newPlist Properties property myName Name that should be used when loading this library. property myName : "_plist" Read Keys readKey(posixPath, keyname) The journal of Apple technology. How to save a number variable to file in applescript?

"man" AppleScript. This document is a guide to the AppleScript language—its lexical conventions, syntax, keywords, and other elements. 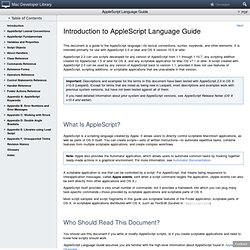 Finalizing the Book List ApplicationOur application is not complete until we can save, update and delete books. 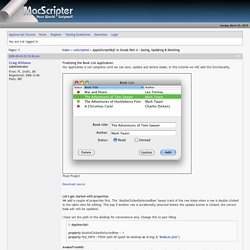 MacScripter / Lessons & Fun with "do shell script" in AppleScripts. With the introduction of OS X, Apple's operating system was built on a BSD Unix foundation. 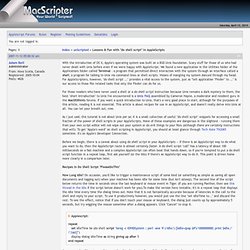 Scary stuff for those of us who had never dealt with Unix before even if we were happy with AppleScript. We found a new application in the Utilities folder of the Applications folder called Terminal - a program that permitted direct interaction with the system through an interface called a shell; a program for talking to Unix via command lines or shell scripts. Visions of mangling my system danced through my head. For AppleScripters, however, "do shell script ... " provides a vital access to the system, just as "tell application "Finder" to ...

" is our access to those file related tasks that only the Finder can do for us.For those readers who have never used a shell or a do shell script instruction because Unix remains a dark mystery to them, the best "short introduction" to Unix I've encountered is a Unix FAQ assembled by Cameron Hayne, a moderator and resident guru in the MacOSXhints forums. Script Language Guide: Introduction to AppleScript Language Guide.