Acs.org. Local shops: PM wrong on Sunday trading. The Association of Convenience Stores has labelled the Prime Minister’s response to a question on Sunday trading as ‘ill-informed’ and ‘incorrect’ on key details of the current law and the debate about devolving decision-making to local authorities. 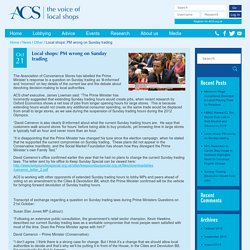 ACS chief executive, James Lowman said: “The Prime Minister has incorrectly suggested that extending Sunday trading hours would create jobs, when recent research by Oxford Economics shows a net loss of jobs from longer opening hours for large stores. This is because extending hours would not create any additional consumer spending, so the same trade would be displaced from small to large stores, as we saw during the suspension of Sunday trading hours during the 2012 Olympics.

“David Cameron is also clearly ill-informed about what the current Sunday trading hours are. He says that customers walk around stores ‘for hours’ before being able to buy products, yet browsing time in large stores is typically half an hour and never more than an hour. Easing Sunday shopping restrictions on large stores in England and Wales. Evaluating the impact of Sunday trading deregulation.

12 retail trends and predictions to watch for. Mobile will show no signs of slowing down next year and we anticipate smartphones and tablets to play bigger roles in the shopping journey. Expect to see more of the following: Loyalty apps Next year, more retailers will introduce mobile loyalty programs. Shoppers will no longer have to clutter up their wallets with physical cards. Instead, they can track and redeem their rewards using their smartphones through apps such as Collect.

Mobile services Convenient services such as mobile ordering will be more prevalent. Bird On a Wire, an Auckland-based free-range rotisserie chicken joint, for instance, uses the solution to offer online and mobile ordering, and it’s worked out quite well for them. Mobile payment solutions The number of consumers adopting mobile wallets will increase in 2015, thanks to solutions offered by Google, Softcard, Apple, and most recently, CurrentC.

Home. Sunday Trading Hours. Tuesday, July 7, 2015 There Is No Compelling Evidence To Support Changes To 1994 Sunday Trading Laws Says GMB If changes are pushed through legal safeguards to give a genuine choice for retail workers are needed so that they can plan their work around their family and caring commitments says GMB. 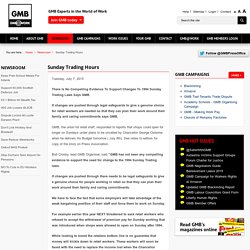 GMB, the union for retail staff, responded to reports that shops could open for longer on Sundays under plans to be unveiled by Chancellor George Osborne when he delivers his Budget tomorrow ( July 8th). Govt ‘broke promise’ over all-day Sunday shopping plans. The Christian Institute has spoken out after the Government broke its promise not to extend Sunday trading by launching a snap consultation on empowering local authorities to extend hours. 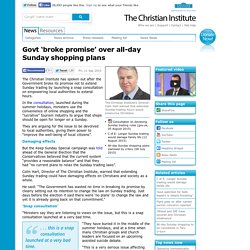 In the consultation, launched during the summer holidays, ministers use the convenience of online shopping and the “lucrative” tourism industry to argue that shops should be open for longer on a Sunday. They are arguing for the issue to be devolved to local authorities, giving them power to “improve the well-being of local citizens”. Damaging effects But the Keep Sunday Special campaign was told ahead of the General Election that the Conservatives believed that the current system “provides a reasonable balance” and that they had “no current plans to relax the Sunday trading laws”.

Colin Hart, Director of The Christian Institute, warned that extending Sunday trading could have damaging effects on Christians and society as a whole. ‘Snap consultation’ ‘Pressure’ ‘Precious family time’ Research undermines Sunday trading plans - Forecourt Trader. The family test was introduced in 2014 by the Prime Minister, who launched guidance for departments to use when introducing new policies, with the intention being to “introduce an explicit family perspective to the policy making process”. 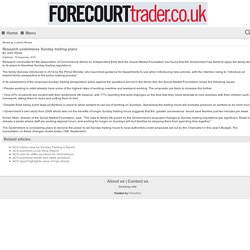 In its assessment of the proposed Sunday trading deregulation plans against the questions set out in the family test, the Social Market Foundation raises the following issues: • People working in retail already have some of the highest rates of working overtime and weekend working. The proposals are likely to increase this further. • Only 25% of parents are content with their work/home life balance, with 77% reporting that work impinges on the time that they could dedicate to core activities with their children such as homework, taking them to clubs and putting them to bed. • Government’s own study from 2006 which sets out the benefits of longer Sunday trading hours suggests that the ‘greater convenience’ would save families just two minutes per week. Sunday trading shake-up: legal implications for retailers. BIS 15 359 consultation on devolving sunday trading rules.

Keep Sunday Special. Polling conducted in ComRes in February 2015 showed that 76% of the general public are in favour of the existing Sunday Trading regulations Of those who wanted a change in the law, 60% were in favour of more restrictions on trading hours on Sundays View from Malcolm Brown, Church of England Churches are open for worship seven days a week – why should we deny similar access to those whose religion is shopping? 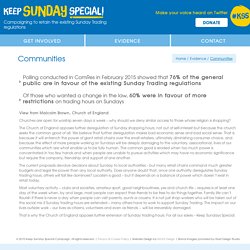 The Church of England opposes further deregulation of Sunday shopping hours, not out of self-interest but because the church seeks the common good of all. We believe that further deregulation makes bad economic sense and bad social sense. That is because it will entrench the power of giant retail chains over the small retailers, ultimately diminishing consumer choice, and because the effect of more people working on Sundays will be deeply damaging to the voluntary, associational, lives of our communities which are what enable us to be fully human.