50+ fascinating stats about mobile commerce in the UK: 2015. In 2015 the shift towards mobile asserting itself as the dominant user device for shoppers has become unavoidable. 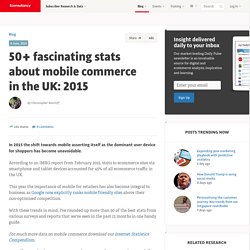 According to an IMRG report from February 2015, visits to ecommerce sites via smartphone and tablet devices accounted for 45% of all ecommerce traffic in the UK. This year the importance of mobile for retailers has also become integral to business, as Google now explicitly ranks mobile friendly sites above their non-optimised competition. With these trends in mind, I've rounded up more than 50 of the best stats from various surveys and reports that we've seen in the past 12 months in one handy guide. For much more data on mobile commerce download our Internet Statistics Compendium. Retailers missing out on £6.6bn a year by not going mobile The UK retail industry is sacrificing £6.6bn per year due to lack of investment into its mobile offering, according to research by Centre for Retail Research (CRR) and VoucherCodes.co.uk Other key highlights from the research include:

Total retail 2015. 12 illuminating ecommerce stats from January-March 2015. Every week we publish a round-up of the best digital marketing stats, and every month we update our gigantic Internet Statistics Compendium. 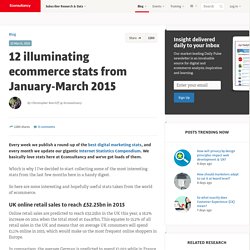 We basically love stats here at Econsultancy and we've got loads of them. Which is why I I’ve decided to start collecting some of the most interesting stats from the last few months here in a handy digest. So here are some interesting and hopefully useful stats taken from the world of ecommerce. UK online retail sales to reach £52.25bn in 2015 Online retail sales are predicted to reach £52.25bn in the UK this year, a 16.2% increase on 2014 when the total stood at £44.97bn, This equates to 15.2% of all retail sales in the UK and means that on average UK consumers will spend £1,174 online in 2015, which would make us the most frequent online shoppers in Europe. In comparison, the average German is predicted to spend £1,023 while in France the figure is £847. 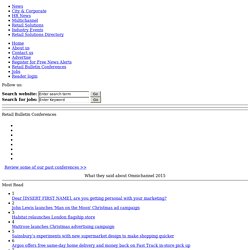 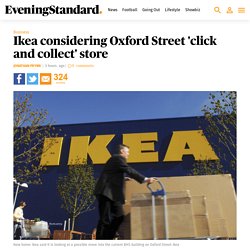 The Swedish giant is in talks with the owner of the BHS store near Oxford Circus about launching a smaller format outlet. It has already opened one in Norwich and has a second planned for Aberdeen next Spring. IKEA has four full scale flagships outlets around Great London - at Wembley, Edmonton, Croydon and Lakeside near Thurrock in Essex. Retail Sales, July 2015. @Mintel Consumer Trends 2015 for Retail - Intelligent ReachIntelligent Reach. Mintel have summarised their predictions for 2015 based on their extensive research, a few of the key trends are listed below… Consumers are deciding the future of retailers as their demands for C&C (Click & Collect), easier returns and more instantaneous delivery methods are high on the agenda as the on-demand, instant gratification of the digital culture is now spreading to the high street. 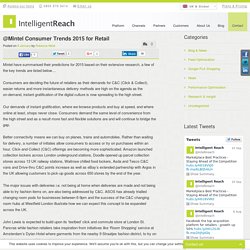 Our demands of instant gratification, where we browse products and buy at speed, and where online at least, shops never close. Consumers demand the same level of convenience from the high street and as a result more fast and flexible solutions are and will continue to bridge the gap. Better connectivity means we can buy on planes, trains and automobiles. Rather than waiting for delivery, a number of initiates allow consumers to access or try on purchases within an hour. John Lewis is expected to build upon its ‘testbed’ click and commute store at London St. 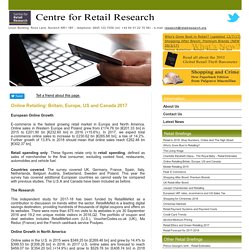