POSTERS - IGLOO LIEK DESIGN. Architecture. A sketch playing with the idea of being able to prop yourself outside buildings in order to get better/higher view to draw. 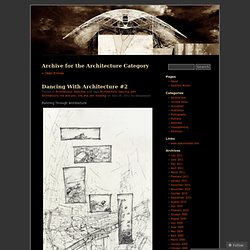 There are balconies, windows and so on, but there is a tendency for them to be private, inaccessible from the inside – instead, how about introducing a series of external waypoints to create invisible infrastructures for those willing to discover them. The idea of manipulating high edges/surfaces of buildings and extracting these into individual spaces that are not easily accessible. Not space for the masses, but spaces that reward effort. If you are willing to get a serious injury in order to experience something unique is it worth it? Perhaps a sort of ground based skydiving, or mountain climbing. Mole skin Gel Pen sketches. The Collapse of Time: And Other Diary Constructions - John Hejduk. Pamphlet Architecture. 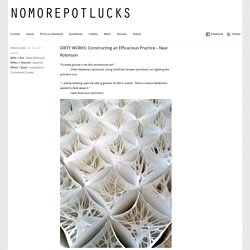 “…and by breaking open the idea of ground, all Hell is loosed. There’s a reason Modernism wanted to float above it.” – Neal Robinson (architect) Dirt is all that lies beneath[1] (the idea of) us. It is the relative stigma from which technology, fine moral character, and notions of good health have sought maximum distance. Historically speaking, the urban and imagined intellectual worlds of the learned equated dirt with filth, and its cultural legacy is equipped with strategies of eradication and containment that all but the most rural (read: poor) can readily accomplish.

It is in the grotesque production of fundaments that Dirty Works take hold. Using “good dirt” from the rural veins of middle Georgia, this “Dirty Work” takes up colloquial earth as both building material and recalibrated “promised land.” Finally, a Mathematically Accurate Way to Predict the Behavior of ... Bubbles. Bursting your bubble just got a little more scientific. 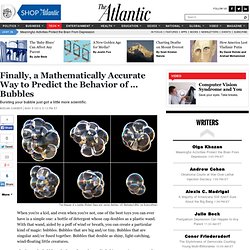 The lifespan of a bubble (Robert Saye and James Sethian, UC Berkeley/LBNL via ScienceNow) When you're a kid, and even when you're not, one of the best toys you can ever have is a simple one: a bottle of detergent whose cap doubles as a plastic wand. With that wand, aided by a puff of wind or breath, you can create a particular kind of magic: bubbles. Bubbles that are big and/or tiny. Bubbles that are singular and/or fused together. Access to Tools. , spring 1969 In 1968, Stewart Brand founded the Whole Earth Catalog . Brand’s goals were to make a variety of tools accessible to newly dispersed counterculture communities, back-to-the-land households, and innovators in the fields of technology, design, and architecture, and to create a community meeting-place in print.

The catalogue quickly developed into a wide-ranging reference for new living spaces, sustainable design, and experimental media and community practices. After only a few years of publication it exploded in popularity, becoming a formidable cultural phenomenon. , from. Architectural narratives. The thirty-eighth issue of Volume entitled The Shape of Law has been recently released and I have the great chance to have a paper in it, in company of many friends (Daniel Fernandez Pascual, Nina Kolowratnik, Pedro Gadanho, Ethel Baraona Pohl, Brendan Cornier, Cristina Goberna, Urtzi Grau, Dubravka Sekulic and Paula Alvarez). 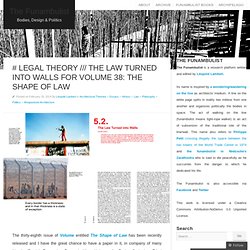 This issue is very useful as an introduction to problems of space in relation to the legal system that produces it. My own contribution is entitled “The Law Turned into Walls,” and despite the fact that it does not really bring any new element to the essays gathered in The Funambulist Pamphlets: Volume 04: Legal Theory, the articulation of the ideas developed in various texts written in the past was a useful exercise and constitutes a synthesis for this book: THE LAW TURNED INTO WALLS ///originally written for Volume 38: The Shape of Law (February 2014) 01.

Architecture and Sculpture. PETER COOK: The London Eight. (above) Virtually Venice (2004), by architect CJ Lim. The following is excerpted from the catalogue of the SCI-Arc Library exhibition, “London Eight,” curated by Sir Peter Cook, which can be seen at the Southern California Institute of Architecture in Los Angeles, March 19 through May 16, 2010: Richness of investigation that can be found in the grain of the work distinguishes certain exploratory architecture that has been going on in London for the last 30 years. Given that the resulting compositions are sometimes weird, there is a tendency for outside observers to admire its craftsmanship (as drawing or physical fashioning—or its will to surf between various modes and programs of digitalization). Such observers often seem shy to discuss its uncomfortable relationship with either the Broad Mainstream of built and projected architecture or the more shrilly political/theoretical thrusts of European Statements and Positions.

BODY SURFING CHAPTER II: Key Stretches. Matering Material  Abstract I was triggered by the two opposing texts from two different medias. They are talking about architect’s role based on their directions of practice. This writing tries to explain why it is wrong to do that: commenting contemporary architecture without relating it to its architectural thinking/ theory. As a result, this writing tries to convince that material based digital innovations are the true advantages of our time of life that we should use as the starting point. By critiquing some related projects, which explains more about “what is not”, I try to define an abstract area that can still be explored. The unnecessary debate An interesting text was published by The New York Times in its architecture weekly column, which was titled ‘ Architecture; until the money ran out’ by Ouroussoff (2008). ” …But somewhere along the way that fantasy took a wrong turn.