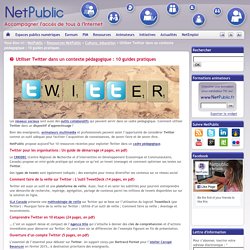 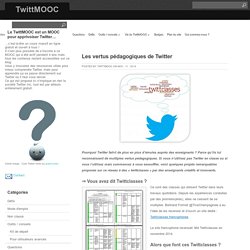 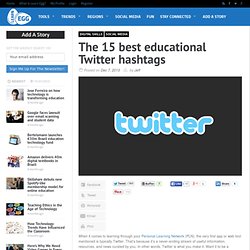 That’s because it’s a never-ending stream of useful information, resources, and news curated by you. In other words, Twitter is what you make it. Want it to be a supercharged learning network on steroids? But how do you find all the ‘right’ people, you may be asking? Educational Hash Tags. Twitter Lesson - Learning English on Twitter Lesson. By Kenneth Beare Twitter has exploded across the Internet and more and more English learners are taking advantage of Twitter to practice their English. 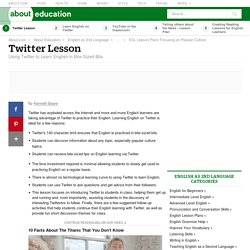 Learning English on Twitter is ideal for a few reasons: Twitter's 140 character limit ensures that English is practiced in bite-sized bits.Students can discover information about any topic, especially popular culture topics.Students can receive bite-sized tips on English learning via Twitter. The time investment required is minimal allowing students to slowly get used to practicing English on a regular basis.There is almost no technological learning curve to using Twitter to learn English.Students can use Twitter to ask questions and get advice from their followers.This lesson focuses on introducing Twitter to students in class, helping them get up and running and, most importantly, assisting students in the discovery of interesting Twitterers to follow. Continue reading below our video. Twitter-in-the-English-Classroom. 50 Ways to Use Twitter in the Classroom.

Many critics of Twitter believe that the 140-character microblog offered by the ubiquitous social network can do little for the education industry. 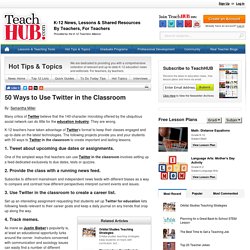 They are wrong. K-12 teachers have taken advantage of Twitter’s format to keep their classes engaged and up-to-date on the latest technologies. The following projects provide you and your students with 50 ways to Twitter in the classroom to create important and lasting lessons. 1. Tweet about upcoming due dates or assignments. One of the simplest ways that teachers can use Twitter in the classroom involves setting up a feed dedicated exclusively to due dates, tests or quizzes. 2.

Subscribe to different mainstream and independent news feeds with different biases as a way to compare and contrast how different perspectives interpret current events and issues. 3. 50 Ways to Use Twitter in the College Classroom. Twitter has caught fire across many professional fields as well as personally, but it seems to be in the beginning stages in the realm of higher education. 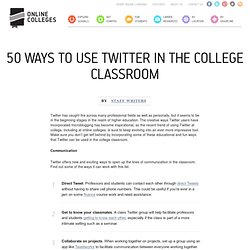 The creative ways Twitter users have incorporated microblogging has become inspirational, so the recent trend of using Twitter at college, including at online colleges, is sure to keep evolving into an ever more impressive tool. Make sure you don’t get left behind by incorporating some of these educational and fun ways that Twitter can be used in the college classroom. Communication Twitter offers new and exciting ways to open up the lines of communication in the classroom. Find out some of the ways it can work with this list. Direct Tweet. Class Projects and Discovering Content. @RealTimeGatsby - Effective use of Twitter for English Class. Just today I came across the Twitter account @RealTimeGatsby. 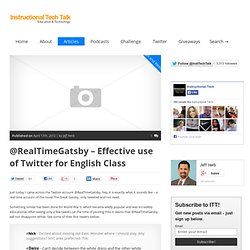 Yep, it is exactly what it sounds like – a real time account of the novel The Great Gatsby, only tweeted and not read. Something similar has been done for World War II, which became wildly popular and was incredibly educational. After seeing only a few tweets (at the time of posting this) it seems that @RealTimeGatsby will not disappoint either. See some of their first tweets below: #Nick - Excited about moving out East. #Daisy - Can’t decide between the white dress and the other white dress. #Myrtle - That sign down the road is creepy in the morning. The use of Hashtags modernizes the novels core meanings and brings a completely different sense of understanding to students. How Twitter Saved my Literature Class: A Case Study with Discussion. 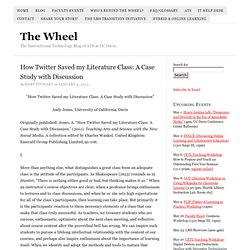 “How Twitter Saved my Literature Class: A Case Study with Discussion.” (2011). Teaching Arts and Science with the New Social Media. A collection edited by Charles Wankel. More than anything else, what distinguishes a great class from an adequate class is the attitude of the participants. In order for such a course to exist, in order for this transformational learning to take place, the instructor and students together must face down an array of obstacles and distractions. Perhaps recent research in industrial psychology could help us understand what motivates our students.

I had this question in mind as I was preparing for a short fiction class for 30 undergraduates that I taught during the summer of 2009 at the University of California, Davis. How to Create a Twitter Account. Twenty Five Interesting Ways To Use Twitter in the Classroom. Andrew Fitzgerald: Adventures in Twitter fiction. How Teachers Can Stop Being Scared Of Twitter.

November’s EdTechTeacher’s iPad Summit (which, by the way, I found through Twitter) completely amazed, overwhelmed, challenged, and inspired me. I left feeling empowered about the 1:1 iPad environment in which I was teaching and excited about the possibilities of technology inside and outside of my classroom. My Twitter Addiction I also left the conference with a mild addiction to Twitter. Mild as in I stopped taking notes within the first 5 minutes of the keynote when I realized that I could just tweet the links for great resources, apps, articles, images, videos… And went from following one or two people to dozens of the brightest stars in the edtech realm – including the EdTechTeacher staff and some pretty amazing teachers I met at the conference.

Like I said, it was a *mild* addiction. It’s A Conversation But it was more than just a running list of sites to check out and apps to investigate. The Personal Learning Network. My Best Posts Related To Twitter. Twitter in Education – Barriers and possible solutions? After a wry commentary on the ‘10 Stages of Twitter‘ many educators have commented on the barriers that exist to twitter use. 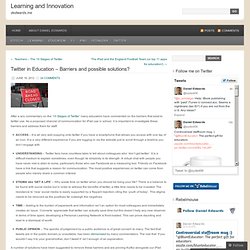 As a proposed channel of communication for iPad use in school, it is important to investigate these barriers and address them for staff.