Sleep Paralysis
The Most Terrifying State of Consciousness

The Science of Lucid Dreaming and How to Learn to Control Your Dreams, Animated. By Maria Popova As if the science of sleep and the emotional function of dreaming weren’t fascinating enough in and of themselves, things get even more bewildering when it comes to lucid dreaming — a dream state in which you’re able to manipulate the plot of the dream and your experience in it. 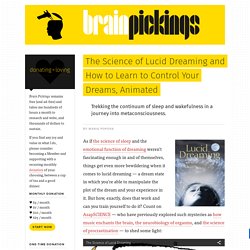 But how, exactly, does that work and can you train yourself to do it? Count on AsapSCIENCE — who have previously explored such mysteries as how music enchants the brain, the neurobiology of orgasms, and the science of procrastination — to shed some light: Everybody has 3-7 dreams a night — the problem is, we quickly forget them. (Then again, the probability that you are dreaming this very minute might be one in ten, so it might all be moot.) Then, treat yourself to this fantastic and mind-bending Radiolab episode about how one man cured himself of a recurring nightmare by learning lucid dreaming:

Understanding Sleep Paralysis: A Terrifying But Unique State Of Consciousness. “I awake in bed … In the corner of the room there are two men. 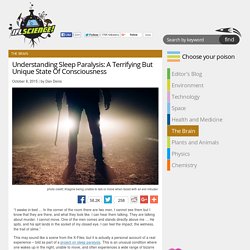 I cannot see them but I know that they are there, and what they look like. I can hear them talking. They are talking about murder. I cannot move. One of the men comes and stands directly above me … He spits, and his spit lands in the socket of my closed eye. This may sound like a scene from the X-Files, but it is actually a personal account of a real experience – told as part of a project on sleep paralysis. On October 9 a new documentary, The Nightmare, directed by Rodney Ascher, is being released in the UK. Hallucinations And Risk Factors Sleep paralysis episodes typically occur either early in the night, as someone is falling asleep, or towards the end of the night, as someone is waking up.

There are three categories of hallucinations. ‘My Dream My Bad Dream’ by Fritz Schwimbeck in 1915. Sleep paralysis is more common than you may think. Laboratory Studies. Sleep Paralysis Is the Most Terrifying State of Consciousness. By Natalie Shoemaker My first introduction to sleep paralysis was through Steven Yeun (aka Glenn on The Walking Dead). 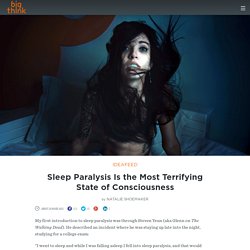 He described an incident where he was staying up late into the night, studying for a college exam: “I went to sleep and while I was falling asleep I fell into sleep paralysis, and that would happen to me a lot,” he said in an interview with The Indoor Kids. “I started feeling a pushing on my chest, and I was like 'what is this? ' So, I open my eyes ... It would happen in moments when he was deprived of sleep and had a lot of anxiety, he said. The paralysis mechanism has a practical use. Shelby Harris explains why we feel so terrified when we experience sleep paralysis. On the flip side, Dan Denis, a Ph.D. student in psychology at the University of Sheffield, explains that sleep paralysis is a moment when “your mind wakes up, but your body doesn’t. " There's no formal treatment for “curing” sleep paralysis. Natalie has been writing professionally for about 6 years.

Understanding Sleep Paralysis: A Terrifying But Unique State Of Consciousness. Gallery. A selection of film, artworks and extracts from literature inspired by or referencing sleep paralysis. 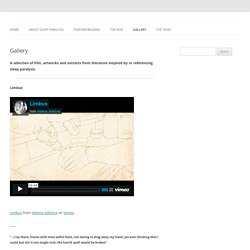 Limbus Limbus from Helena Adelina on Vimeo. “…I lay there, frozen with most awful fears, not daring to drag away my hand; yet ever thinking that I could but stir it one single inch, the horrid spell would be broken” – Herman Melville, ‘Moby Dick’ Hum Hum from Emily&Anne on Vimeo. Cataplectic Dreams from Helena Adelina on Vimeo. Squeezed by Shadows: installation extract from Sleep Paralysis Project on Vimeo. Devil In The Room. Hypnogogia. ‘A dark presence squats on my chest’: the waking nightmare of sleep paralysis. The other morning, I sat down to watch The Nightmare, a new documentary about a condition called sleep paralysis. 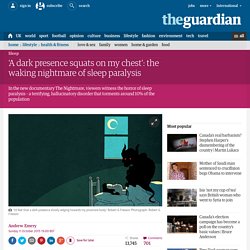 I was feeling tired, as so often over the past 35 years, because my night’s sleep had been punctuated and, ultimately, ruined, by the very same terrors the film depicts. Sleep disorders are a common part of the human experience. From narcolepsy to insomnia, restless legs syndrome to sleep apnea, many of us find our nights are tormented, and our days ruined as a result. But few disorders can be as routinely terrifying as sleep paralysis. I had my first experience of it at around five or six. But it’s the hallucinatory aspect of sleep paralysis that is its most petrifying feature. Many people with sleep paralysis suffer in silence. Director Rodney Ascher found his subjects online, and, indeed, the early days of the internet was, for many, the first time people became aware that their sleep disorder had a name, and was shared by people around the world.