Past Patterns: 1900-1920's Patterns. About Regency Fashion << San Diego English Country Dancers. Whilst period costumes are never required, they add to the ambiance and enhance the experience of a Regency Ball. 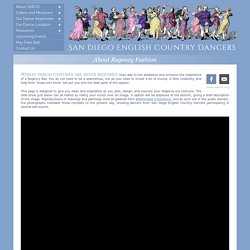 You do not need to be a seamstress, nor do you need to invest a lot of money. A little creativity, and help from 'those who know' will put you into the best spirit of the season. This page is designed to give you ideas and inspiration as you plan, design, and execute your Regency-era costume. The slide show just below can be halted by rolling your cursor over an image. A caption will be displayed at the bottom, giving a brief description of the image. Left: "A Colonial Coquette" by Charles Henry Turner (1848-1908), a Victorian depiction of early 19th-century Regency fashion, with high-front bonnet and reticule. Right: "The Sculpture Gallery in the Louvre Museum, 1806" by Regency revivalist painter François Courboin (1856-1926). Throughout the ages, the change of fashion is most often politically motivated.

Ladies’ Fashions Creating a Regency Ball Gown Gentlemen’s Fashions. Undress, Half Dress, Full Dress: Making Sense of It All. Undress, Half Dress, Full Dress: Making Sense of It All When Lydia went away, she promised to write very often and very minutely to her mother and Kitty; but her letters were always long expected, and always very short.Those to her mother contained little else, than that they were just returned from the library, where such and such officers had attended them, and where she had seen such beautiful ornaments as made her quite wild; that she had a new gown, or a new parasol, which she would have described more fully, but was obliged to leave off in a violent hurry, as Mrs Forster called her, and they were going to the camp; — and from her correspondence with her sister, there was still less to be learnt — for her letters to Kitty, though rather longer, were much too full of lines under the words to be made public.Pride and Prejudice Let us understand from the start that the term “Undress” did not signify being unclothed. 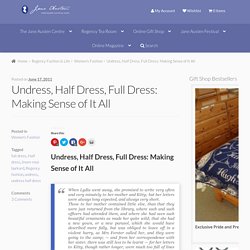 Likewise, “Half Dress” did not mean one was literally half- dressed. Make Your Own Shoe Roses. If there had not been a Netherfield ball to prepare for and talk of, the younger Miss Bennets would have been in a pitiable state at this time, for from the day of the invitation to the day of the ball, there was such a succession of rain as prevented their walking to Meryton once.No aunt, no officers, no news could be sought after; — the very shoe-roses for Netherfield were got by proxy.Even Elizabeth might have found some trial of her patience in weather which totally suspended the improvement of her acquaintance with Mr Wickham; and nothing less than a dance on Tuesday, could have made such a Friday, Saturday, Sunday, and Monday endurable to Kitty and Lydia. 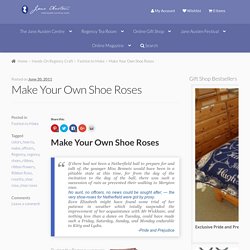 -Pride and Prejudice During the Regency women’s shoes took a dramatic turn from the high-heeled bejeweled creations of the previous generation. Instead, simple kidd leather or satin slippers were worn, and dainty ankle boots protected feminine feet when venturing abroad. How to Make Ribbon Shoe Roses To Adorn Your Footwear. Regency Fashions for Ladies, Vintage Victorian. HIGHLY RECOMMENDED PATTERNS Past Patterns: The company I reccommend most often is Past Patterns. 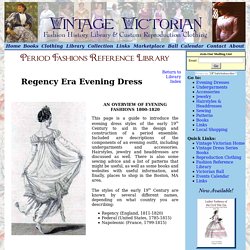 The patterns are taken from actual period garments or antique patterns, with complete, tested, professional sewing instructions, and often the patterns come with exhaustive historical notes. Most patterns are available in a wide range of modern sizes or, if it is one of the Vintage Revivals patterns, just the original period size. Janet Arnold, Patterns of Fashion: Next I would recommend the books by Janet Arnold. Jane Austen. When I had reached my eighteenth Year, I was recalled by my Parents to my paternal roof in Wales. 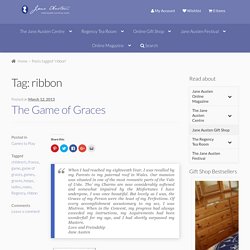 Our mansion was situated in one of the most romantic parts of the Vale of Uske. Tho’ my Charms are now considerably softened and somewhat impaired by the Misfortunes I have undergone, I was once beautiful. But lovely as I was, the Graces of my Person were the least of my Perfections. LoveToKnow. The term "ribbon" refers to narrow loom-woven strips of cloth, often with a visible selvage on each side that helps them to maintain their form. 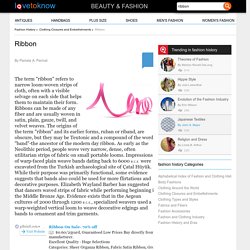 Ribbons can be made of any fiber and are usually woven in satin, plain, gauze, twill, and velvet weaves. The origins of the term "ribbon" and its earlier forms, ruban or riband, are obscure, but they may be Teutonic and a compound of the word "band"-the ancestor of the modern day ribbon. As early as the Neolithic period, people wove very narrow, dense, often utilitarian strips of fabric on small portable looms. Impressions of warp-faced plain weave bands dating back to 6000 B.C.E. were excavated from the Turkish archaeological site of Çatal Hüyük.

While their purpose was primarily functional, some evidence suggests that bands also could be used for more flirtatious and decorative purposes. Early History Fifteenth and Sixteenth Century Seventeenth and Eighteenth Century Nineteenth Century Twentieth Century Beyond Fashion Commemoration Bibliography.