The Biblical Link to the Anunnaki. Christianity. 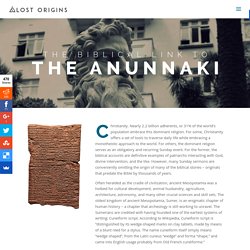 Nearly 2.2 billion adherents, or 31% of the world’s population embrace this dominant religion. For some, Christianity offers a set of tools to traverse daily life while embracing a monotheistic approach to the world. For others, the dominant religion serves as an obligatory and recurring Sunday event.

Scientists agree with Ancient Texts: Humans were engineered. It seems that there are numerous scientists who are beginning to pay attention to ancient texts in order to decipher the mysteries surrounding the purpose and origin of the human race. 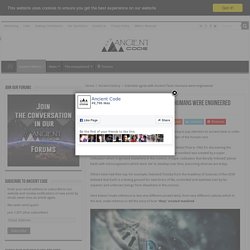 If we look at English biochemist Francis Crick, who won the Nobel Prize in 1962 for discovering the structure of DNA, we will find that be thought it possible that mankind was created by a super civilization which originated elsewhere in the cosmos. A super civilization that literally ‘infected’ planet Earth with microorganisms which were ‘set’ to develop over time, becoming what we are today. Others have had their say. For example, Vsevolod Troitsky from the Academy of Sciences of the USSR believed that Earth is a testing ground for new forms of life, controlled and watched over by far superior and unknown beings from elsewhere in the cosmos. A great deal of Popol Vuh’s significance lies in the scarcity of early accounts dealing with Mesoamerican mythologies and the creation of man. The Anunnaki and Humanity’s Forbidden History.

Ancient Sumerian texts refer to the Anunnaki as “those that came down from the heaven,” a race of extremely powerful and advanced beings that engineered mankind hundreds of thousands of years ago. 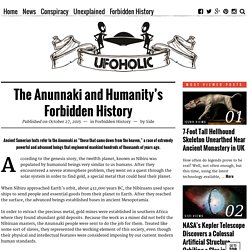 According to the genesis story, the twelfth planet, known as Nibiru was populated by humanoid beings very similar to us humans. After they encountered a severe atmosphere problem, they went on a quest through the solar system in order to find gold, a special metal that could heal their planet. When Nibiru approached Earth’s orbit, about 432,000 years BC, the Nibiruans used space ships to send people and essential goods from their planet to Earth. After they reached the surface, the advanced beings established bases in ancient Mesopotamia. In order to extract the precious metal, gold mines were established in southern Africa where they found abundant gold deposits. 200,000 Year Old Anunnaki Cities Discovered in Africa. (Before It's News) Publisher and producer Michael Tellinger discussed his study of ancient ruins at the southern tip of Africa, which he believes were associated with a vanished civilization that ET visitors, the Anunnaki, brought together over 200,000 years ago, when they came here to mine gold. 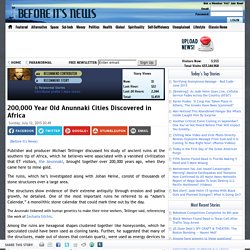 The ruins, which he’s investigated along with Johan Heine, consist of thousands of stone structures over a large area. The structures show evidence of their extreme antiquity through erosion and patina growth, he detailed. One of the most important ruins he referred to as “Adam’s Calendar,” a monolithic stone calendar that could mark time out by the day. The Anunnaki tinkered with human genetics to make their mine workers, Tellinger said, referencing the work of Zecharia Sitchin. Among the ruins are hexagonal shapes clustered together like honeycombs, which he speculated could have been used as cloning tanks. Biography. The Official Web Site of Zecharia Sitchin.

Ancient Astronauts Annunaki Nephilim NEW INFORMATION MUST WATCH NOW!!! NewVersion HERE FINALLY. 2014 Ancient Hidden Technology of the Annunaki (Fallen Angels) Amazing ! The Enoc-Tu The Prophecy of the Rainbow Warriors. The prophets and visionaries of many Native American tribes saw not only the devastation to come. 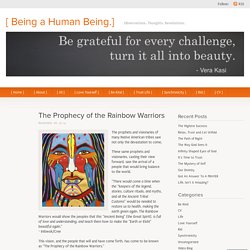 These same prophets and visionaries, casting their view forward, saw the arrival of a people that would bring balance to the world. “There would come a time when the “keepers of the legend, stories, culture rituals, and myths, and all the Ancient Tribal Customs” would be needed to restore us to health, making the earth green again. The Rainbow Warriors would show the peoples that this “Ancient Being” (the Great Spirit), is full of love and understanding, and teach them how to make the “Earth or Elohi” beautiful again.” ~ Initiwok/Cree. 100% proof Edgar Cayce was correct! Eastlake, Ohio = Home of the The Nephilim “Mound Builders” One of the Fabled Lost Nations/Tribes….The Nephilim! Imagine this, if you will… You experience strange ET Contact & happenings your entire life. 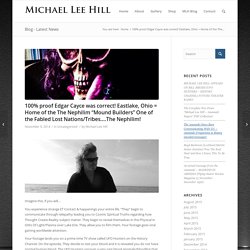 “They” begin to communicate through telepathy leading you to Cosmic Spiritual Truths regarding how Thought Create Reality subject matter. They begin to reveal themselves in the Physical in Orbs Of Light/Plasma over Lake Erie. They allow you to film them. Your footage goes viral gaining worldwide attention. Your footage lands you on a prime time TV show called UFO Hunters on the History Channel. Welcome to my world! These UFO/Orbs have been appearing over Lake Erie for a few several years now.

John Ventre (Host of History Channels “Hanger 1″) and others are convinced the key to Extra Terrestrial Disclosure may be Lake Erie!