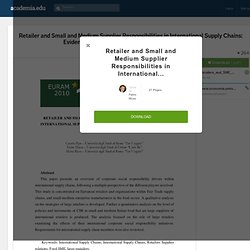 The choice of the food sector was due to the more sensitive ethical consumer issues.These issues require retailers to place priority in the adoption of CSR practices within suchproducts. 2. CSR, traceability and international supply chains CSR has recently become a new corporate buzzword, as well as an emerging field of competition among companies. CSR is an enlarged concept of responsibility, depending on ageneral evolution of “values” linked to the relationship between a business organization andits environment. Et al ., 1988; Wood, 1995). 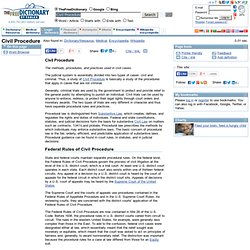 The judicial system is essentially divided into two types of cases: civil and criminal. Thus, a study of Civil Procedure is basically a study of the procedures that apply in cases that are not criminal. Generally, criminal trials are used by the government to protect and provide relief to the general public by attempting to punish an individual. Civil trials can be used by anyone to enforce, redress, or protect their legal rights through court orders and monetary awards. 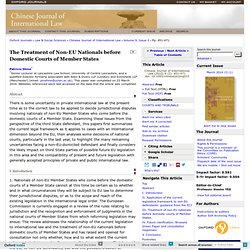 This paper was completed on 23 March 2010. Websites referenced were last accessed on the date that the article was completed. Abstract There is some uncertainty in private international law at the present time as to the correct law to be applied to decide jurisdictional disputes involving nationals of non-EU Member States who come before the domestic courts of a Member State. Www.tresor.economie.gouv.fr/File/398811. Document.aspx. Sites/default/files/user/A4ID Business and Human Rights Guide 2013 (web).pdf. Sites/default/files/Implications of the UN Guiding Principles on Business and Human Rights for the Fair Labor Association_4.pdf.

MANAGING GLOBALIZATION: CHALLENGES FACING INTERNATIONAL LAW IN THE 21st CENTURY. Same taste of rock and roll music and television programmes and movies.With the facts that Bangladeshi and Kenyan vegetables being sold in thesame freshness side by side in the markets of London’s East end and Indianmaths tutors giving lessons online sitting in a box-room in some part ofBangalore to American high school kids boosting their exam. grades at afraction of US tuition cost charged there, one is convinced how far the worldhas shrunk. 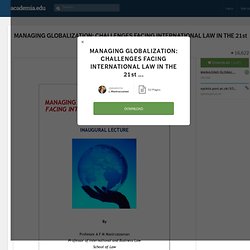 Thomas Friedman of the New York Times has written abestseller “The World is Flat” interestingly describing these phenomena.The world is indeed being flattened now in the crushing wave ofglobalization.The word ‘globalization’ has no fixed definition in the modern-dayworld, however. The Economist has called it “the most abused word of the21 st century”. Over the last quarter century, the ideology of globalization has beenvigorously pursued by certain developed countries, Joint Action Update: Protest against Adidas and its suppliers and support the demands of Indonesian and Chinese workers. October 19, 2012 Globalization monitor joined the action called by the labor groups from the Philippines and Indonesia in Hong Kong to protest against the malpractices of Adidas and its suppliers yesterday. 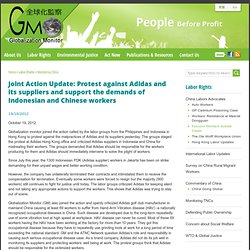 The groups staged the protest at Adidas Hong Kong office and criticized Adidas suppliers in Indonesia and China for mistreating their workers. The groups demanded that Adidas should be responsible for the workers producing for them and Adidas should immediately intervene to solve the plight of workers. Since July this year, the 1300 Indonesian PDK (Adidas supplier) workers in Jakarta has been on strike demanding for their unpaid wages and better working condition. 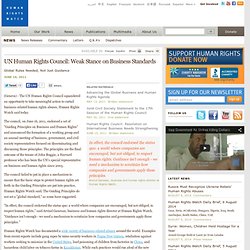 The council, on June 16, 2011, endorsed a set of "Guiding Principles on Business and Human Rights" and announced the formation of a working group and an annual meeting of business, government, and civil society representatives focused on disseminating and discussing those principles. The principles are the final outcome of the tenure of John Ruggie, a Harvard professor who has been the UN's special representative on business and human rights since 2005. The council failed to put in place a mechanism to ensure that the basic steps to protect human rights set forth in the Guiding Principles are put into practice, Human Rights Watch said.

Report of the ICJ Expert Legal Panel on Corporate Complicity in International Crimes. While businesses and their officials are sometimes directly and immediately responsible for human rights abuses, allegations are frequently made about their complicity in such crimes. 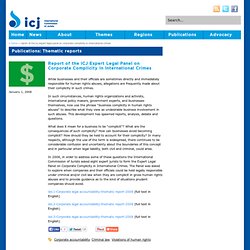 In such circumstances, human rights organizations and activists, international policy makers, government experts, and businesses themselves, now use the phrase “business complicity in human rights abuses” to describe what they view as undesirable business involvement in such abuses. This development has spawned reports, analysis, debate and questions. What does it mean for a business to be “complicit”? What are the consequences of such complicity?

How can businesses avoid becoming complicit? In 2006, in order to address some of these questions the International Commission of Jurists asked eight expert jurists to form the Expert Legal Panel on Corporate Complicity in International Crimes. Www.ohchr.org/Documents/Issues/Business/DomesticLawRemedies/StudyDomesticeLawRemedies.pdf. Antonio-Cardesa.pdf. Reportd_en.pdf. The Shell Nigeria cases - an important precedent for transnational liability claims - Publications - Allen & Overy. Please enter Byline. 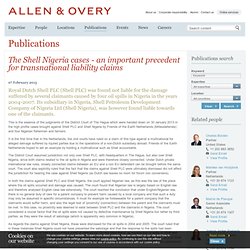 Royal Dutch Shell PLC (Shell PLC) was found not liable for the damage suffered by several claimants caused by four oil spills in Nigeria in the years 2004-2007. Its subsidiary in Nigeria, Shell Petroleum Development Company of Nigeria Ltd (Shell Nigeria), was however found liable towards one of the claimants. This is the essence of the judgments of the District Court of The Hague which were handed down on 30 January 2013 in the high profile cases brought against Shell PLC and Shell Nigeria by Friends of the Earth Netherlands (Milieudefensie) and four Nigerian fishermen and farmers.

It is the first time that in the Netherlands, the civil courts have ruled on a claim of this type against a multinational for alleged damage suffered by injured parties due to the operations of a non-Dutch subsidiary abroad. Friends of the Earth Netherlands hoped to set an example by holding a multinational such as Shell accountable. International Trend. Pn_supplychainrisks.pdf. 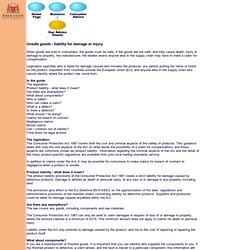 If the goods are not safe, and they cause death, injury or damage to property, the manufacturer, the retailer and/or anyone else in the supply chain may have to meet a claim for compensation. Legislation specifies who is liable for damage caused and includes the producer, any person putting his name or brand on the product, importers from countries outside the European Union (EU), and anyone else in the supply chain who cannot identify where the product has come from. 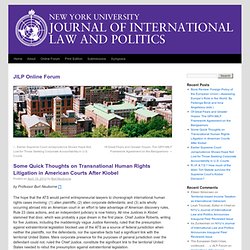 All nine Justices in Kiobel slammed that door, which was probably a pipe dream in the first place. Chief Justice Roberts, writing for five Justices, including the maddeningly vague Justice Kennedy, ruled that the presumption against extraterritorial legislation blocked use of the ATS as a source of federal jurisdiction when neither the plaintiffs, nor the defendants, nor the operative facts had a significant link with the territorial United States.

I want to ask a different question. Hart Publishing, Oxford - Good books for lawyers. Since the mid-1980s,beginning with the unsuccessful Union Carbide litigation in the USA, litigants have been exploring ways of holding multinational corporations [MNCs] liable for offshore human rights abuses in the courts of the companies' home States. The highest profile cases have been the human rights claims brought against MNCs (such as Unocal, Shell, Rio Tinto, Coca Cola, and Talisman) under the Alien Tort Claims Act in the United States. Such claims also raise issues under customary international law (which may be directly applicable in US federal law) and the Racketeer Influenced and Corrupt Organizations [RICO] statute. Another legal front is found in the USA, England and Australia, where courts have become more willing to exercise jurisdiction over transnational common law tort claims against home corporations.

It is the first legal action to be taken against an international brand implicated in the Rana Plaza tragedy. More than 1,100 people were killed last year by the collapse of the textile factory in Bangladesh. Three French organisations have lodged a formal complaint against French retail multinational Auchan for “deceptive commercial practices”, and public prosecutors in Lille have confirmed that a preliminary investigation has been launched. This article was originally published in French. Translation: Stephen Nichols. The plaintiffs directly challenge Auchan’s ethical claims, used by the multinational to burnish its social reputation, while at the same time its refuses to recognise any responsibility with regards to the tragedy or to contribute to the victims’ compensation fund. The choice to sue Auchan for “deceptive commercial practices” was made necessary by the limitations of French (and international) law when it comes to corporate responsibility.

Olivier Petitjean. Www.laborrights.org/sites/default/files/publications-and-resources/Accord_on_Fire_and_Building_Safety_in_Bangladesh_2013-05-13.pdf. Alliance for Bangladesh Worker Safety – Home. International labour standards: ILO statement on reform of Bangladesh labour law. The amendments to the Bangladesh Labour Act 2006, adopted on 15 July 2013, will hopefully prove to be the first step towards fulfilling the Government’s obligation to respect fully the fundamental rights to freedom of association and collective bargaining and to address the critical need to bolster occupational safety and health. Bangladesh has ratified ILO Conventions 87 and 98 on freedom of association and collective bargaining and thus is required to protect the rights contained therein.

The conformity of the amended legislation with international labour standards ratified by Bangladesh will be reviewed by the ILO supervisory machinery later in the year. An initial review suggests that the amendments did address some of the ILO’s specific concerns, while falling short of several important steps called for by the ILO supervisory system to bring the law into conformity with ratified international labour standards. Freedom of Association and Collective Bargaining Other fundamental rights. Convention C087 - Freedom of Association and Protection of the Right to Organise Convention, 1948 (No. 87)

Go to article : 1 2 3 4 5 6 7 8 9 10 11 12 13 14 15 16 17 18 19 20 21 Preamble The General Conference of the International Labour Organisation, Having been convened at San Francisco by the Governing Body of the International Labour Office, and having met in its Thirty-first Session on 17 June 1948; Having decided to adopt, in the form of a Convention, certain proposals concerning freedom of association and protection of the right to organise, which is the seventh item on the agenda of the session; Trade.ec.europa.eu/doclib/docs/2013/july/tradoc_151601.pdf. In Bangladesh, will a legal system 'full of holes' prosecute those responsible for the Rana Plaza factory collapse? Children hoisting tattered photographs of their parents walked among demonstrators honoring those killed one year ago Thursday in the deadly factory collapse at Rana Plaza in Bangladesh.

(This story is based on a radio interview. Listen to the audio to hear it.) "There are hundreds of kids who have lost either one parent or sometimes both," says Zafar Sobhan, the editor of the Dhaka Tribune. "Nothing can bring back a parent, nothing can bring back a husband or a wife, but there is a lot which could have been done for these families — and not a lot has been done. " Www.oecd.org/daf/inv/mne/EasytoUseGuide_English.pdf. Corporate Social Responsibility: The influence of organizational practices perceptions in employee’s performance and organizational identification. Www.mbsportal.bl.uk/secure/subjareas/mgmt/roffeypark/115768insearchofmeaning09.pdf.