WHAT IS A HERO? Youtube. Youtube. Literary Hero Definition & Activities. Since all works of literature have a protagonist, it is helpful to know which category or type of character the protagonist belongs in. 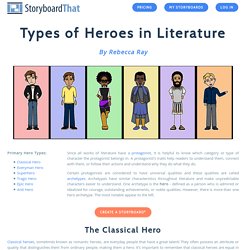 A protagonist's traits help readers to understand them, connect with them, or follow their actions and understand why they do what they do. Certain protagonists are considered to have universal qualities and these qualities are called archetypes. Archetypes have similar characteristics throughout literature and make unpredictable characters easier to understand. 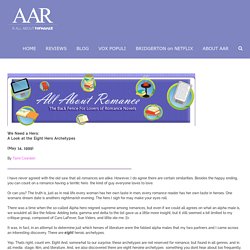 However, I do agree there are certain similarities. Besides the happy ending, you can count on a romance having a terrific hero  the kind of guy everyone loves to love. Or can you? There was a time when the so-called Alpha hero reigned supreme among romances, but even if we could all agrees on what an alpha male is, we wouldnt all like the fellow. It was, in fact, in an attempt to determine just which heroes of literature were the fabled alpha males that my two partners and I came across an interesting discovery. Yep. We came to this conclusion after a great deal of research, during which, in addition to our usual fiction reading, we reviewed the characters found in movies and plays. Meanwhile, here is a peek at the heroes and how each reacts in a similar situation. The Eight Male Archetypes The Chief. Harry Potter and the Three Types of Heroes. 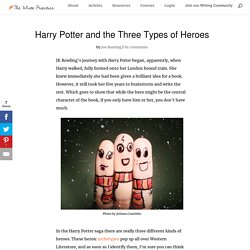 She knew immediately she had been given a brilliant idea for a book. However, it still took her five years to brainstorm and write the rest. Which goes to show that while the hero might be the central character of the book, if you only have him or her, you don’t have much. In the Harry Potter saga there are really three different kinds of heroes. These heroic archetypes pop up all over Western Literature, and as soon as I identify them, I’m sure you can think of other examples in movies, television, literature, and maybe even in your own stories.

The three types of heroes are: The Classic HeroThe Every Man HeroThe Anti-Hero Harry Potter: The Classic Hero Harry is a representation of all the best qualities in our society: courage, intelligence, athleticism, and loyalty. The problem is, he’s so good it no longer surprises us when he wins. Severus Snape: The Anti-Hero. Tragic Hero - Definition and Examples. Tragic Hero Definition What is a tragic hero? 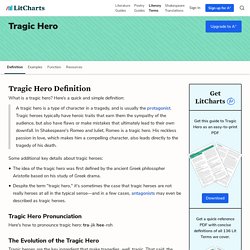 Here’s a quick and simple definition: A tragic hero is a type of character in a tragedy, and is usually the protagonist. Tragic heroes typically have heroic traits that earn them the sympathy of the audience, but also have flaws or make mistakes that ultimately lead to their own downfall. In Shakespeare's Romeo and Juliet, Romeo is a tragic hero. Some additional key details about tragic heroes: The idea of the tragic hero was first defined by the ancient Greek philosopher Aristotle based on his study of Greek drama.

8 Types of Heroes in Literature ideas. What is a Classical Hero? When you think of a hero what comes to mind? 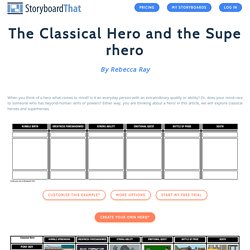 Is it an everyday person with an extraordinary quality or ability? Or, does your mind race to someone who has beyond-human skills or powers? Character Types. The meaning of the term hero changes subtly depending on whether it is used in a broad or a narrow sense. 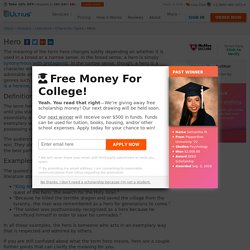 In the broad sense, a hero is simply synonymous with protagonist. In the narrow sense, though, a hero is a character who exemplifies the traits that his own people and culture find admirable and/or morally good. This narrow use is especially relevant in genres such as tragic drama and epic poetry. The female equivalent of a hero is a heroine. Definition of hero The term hero is one of those words that seems to have an obvious meaning, until you start thinking about it. The audience sympathizes with him and "roots" for him; they want him to win. 7 Types of Heroes. Exploring the characteristics of heroes – Carnegie Hero Fund Commission. By Brian R. 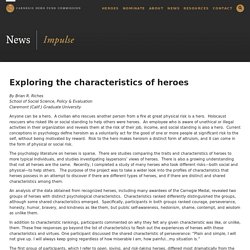 RichesSchool of Social Science, Policy & EvaluationClaremont (Calif.) Graduate University Anyone can be a hero. A civilian who rescues another person from a fire at great physical risk is a hero. Holocaust rescuers who risked life or social standing to help others were heroes. The psychology literature on heroes is sparse. An analysis of the data obtained from recognized heroes, including many awardees of the Carnegie Medal, revealed two groups of heroes with distinct psychological characteristics.

In addition to characteristic rankings, participants commented on why they felt any given characteristic was like, or unlike, them. The first group of participants, which I refer to open, loving, and risk-taking heroes, differed most dramatically from the second group in their rankings of the characteristics of curiosity, love of learning, love, and risk taking as “exactly like me.” Prof. Return to imPULSE index. 6 Common Hero Archetypes in Literature 2021 MasterClass. Literary Hero Definition & Activities. Literary Heroes.