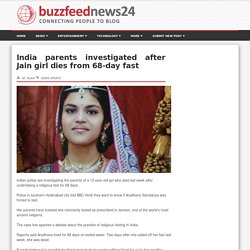 Police in southern Hyderabad city told BBC Hindi they want to know if Aradhana Samdariya was forced to fast. Her parents have insisted she voluntarily fasted as prescribed in Jainism, one of the world's most ancient religions. The case has sparked a debate about the practice of religious fasting in India. Reports said Aradhana lived for 68 days on boiled water. Two days after she called off her fast last week, she was dead. Experts believe it is possible for the human body to survive without food for up to two months. A police spokesperson said a case had been registered against the parents after a child rights organisation filed a complaint.

Voluntary fast? "The parents - Laxmi Chand and Manshi Samdariya - have been booked under culpable homicide [causing death by negligence] and Juvenile Justice Act [cruelty against minors]," the spokesperson said. More Than 140 Dead After Airstrike Hits Funeral in Yemen’s Capital. Families in Yemen searched Sunday for victims of an airstrike that the United Nations said had killed more than 140 funeral mourners and wounded hundreds more, prompting the U.S. to begin a review of the Saudi-led military campaign. 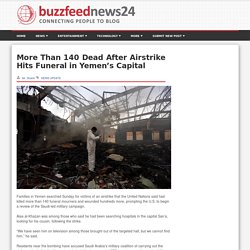 Alaa al-Khazan was among those who said he had been searching hospitals in the capital San’a, looking for his cousin, following the strike. “We have seen him on television among those brought out of the targeted hall, but we cannot find him,” he said. Residents near the bombing have accused Saudi Arabia’s military coalition of carrying out the strike on the hall in the Yemeni capital, which also wounded 525 people, according to the U.N. Office for the Coordination of Humanitarian Affairs in Yemen. People had gathered to mourn the father of Interior Minister Jalal al-Ruwaishan, an ally of the Houthis who the Saudis are trying to dislodge from power in Yemen. A Saudi coalition spokesman, Maj. Portugal's Guterres, likely UN chief, wants to build bridges. UNITED NATIONS (AP) — Portugal's former prime minister Antonio Guterres, who is virtually certain to be the next U.N. secretary-general, says he wants to be "an honest broker, a bridge-builder and someone who tries to create conditions for consensus. 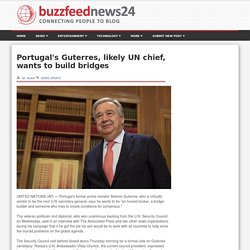 " The veteran politician and diplomat, who won unanimous backing from the U.N. Security Council on Wednesday, said in an interview with The Associated Press and two other news organizations during his campaign that if he got the job his aim would be to work with all countries to help solve the myriad problems on the global agenda. The Security Council met behind closed doors Thursday morning for a formal vote on Guterres' candidacy. Russia's U.N. Ambassador Vitaly Churkin, the current council president, expressed hope that the council will recommend Guterres by "acclamation" to the 193-member General Assembly, which must approve a successor to Ban Ki-moon, whose second five-year term ends Dec. 31. 3 Makers of World’s Smallest Machines Awarded Nobel Prize in Chemistry. Three pioneers in the development of nanomachines, made of moving molecules, were awarded the Nobel Prize in Chemistry on Wednesday. 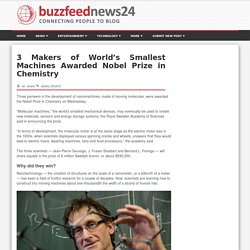 “Molecular machines,” the world’s smallest mechanical devices, may eventually be used to create new materials, sensors and energy storage systems, the Royal Swedish Academy of Sciences said in announcing the prize. “In terms of development, the molecular motor is at the same stage as the electric motor was in the 1830s, when scientists displayed various spinning cranks and wheels, unaware that they would lead to electric trains, washing machines, fans and food processors,” the academy said. The three scientists — Jean-Pierre Sauvage, J. Fraser Stoddart and Bernard L. Feringa — will share equally in the prize of 8 million Swedish kronor, or about $930,000. Why did they win? Nanotechnology — the creation of structures on the scale of a nanometer, or a billionth of a meter — has been a field of fruitful research for a couple of decades. Russia warns US not to attack Syrian regime.

He told the group that he "lost the argument" for using military force against the regime of Syrian President Bashar al-Assad. 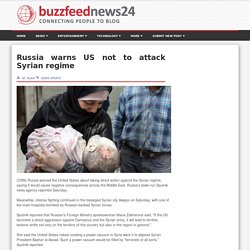 "I've argued for the use of force. I'm the guy who stood up and announced that we're going to attack Assad for the use of weapons," Kerry is heard telling the Syrian attendees, referring to internal deliberations within the administration of President Barack Obama that followed Assad's use of chemical weapons in 2013. Aleppo hospital bombed In Aleppo, the M10 hospital was hit Saturday for the second time in four days. The facility was struck by a "torrent" of weapons including two barrel bombs, two cluster bombs and at least one rocket, said Adham Sahloul, spokesman for the Syrian American Medical Society. One person died and 15 were wounded in the bombings, according to an activist with the opposition-aligned group Aleppo Media Center.