How to Strip Cloth Diapers - Little For Now. Stripping cloth diapers is sometimes necessary to remove buildup of detergent, oils, or minerals. 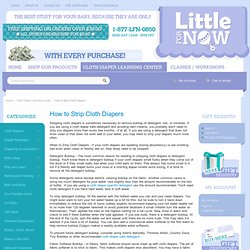 If you are using a cloth diaper safe detergent and avoiding rash creams, you probably won't need to strip you diapers more than every few months - if at all. If you are using a detergent that does not rinse clean or that does not work well in your water, you may need to strip your diapers much more often. When to Strip Cloth Diapers - If your cloth diapers are repelling (losing absorbency) or are smelling bad even when clean or freshly wet on, they likely need to be stripped. Detergent Buildup - The most common reason for needing to stripping cloth diapers is detergent buildup. You'll know there is detergent buildup if your cloth diapers smell funky when they come out of the dryer or if they smell really bad when your child wets on them. Some detergents leave residue behind, causing buildup on the fabric.

Run a hot wash cycle, then check the rinse water for bubbles. Homemade Diaper Rash Cream. Growing up, I was used to the “white tube” of diaper cream. 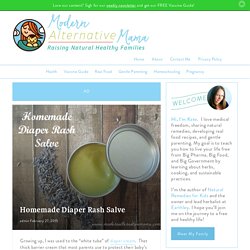 That thick barrier cream that most parents use to protect their baby’s rash. The thing is, that white cream? It’s just meant to keep the rash covered so that it doesn’t get splashed with pee or poop too much. Of course, if they pee it washes most of the cream off, so you still have to change them frequently. I tried this type of cream on my oldest a few times but didn’t find it very effective. Then I made my first homemade diaper cream. Since then I have only used these types of creams. This salve relies on a simple combination of herbs. These herbs are known for their skin-soothing properties. Diaper Rash Salve Ingredients: 1 tbsp. chamomile1 tbsp. calendula flowers1 tbsp. lavender3 1/2 oz. (7 tbsp.) olive oil1 tbsp. beeswax Directions: Step 1: In a small glass jar, combine the herbs and olive oil. Homemade Gummy Vitamins. Baby Formula: What They Wont Tell You About Baby Formula.

This article was published in the UK’s Ecologist Magazine, titled, ‘Suck On This’. 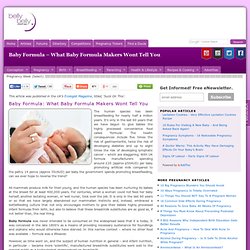 Baby Formula: What Baby Formula Makers Wont Tell You The human species has been breastfeeding for nearly half a million years. It’s only in the last 60 years that we have begun to give babies the highly processed convenience food called ‘formula’. The health consequences include five times the risk of gastroenteritis, twice the risk of developing diabetes and up to eight times the risk of developing lymphatic cancer – which are staggering. With UK formula manufacturers spending around £20 (approx $50AUD) per baby promoting artificial milk compared to the paltry 14 pence (approx 35cAUD) per baby the government spends promoting breastfeeding, can we ever hope to reverse the trend?

All mammals produce milk for their young, and the human species has been nurturing its babies at the breast for at least 400,000 years. New Draft WA Mental Health Bill Set to Erode Children and Parental Rights. 14 year olds can agree to electroshock and 16 year olds to psychosurgery, both without parental consent! 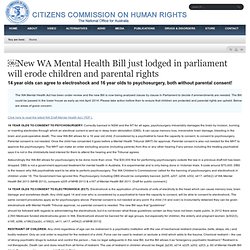 The WA Mental Health Act has been under review and the new Bill is now being analysed clause by clause in Parliament to decide if ammendments are needed. The Bill could be passed in the lower house as early as mid April 2014. Please take action before then to ensure that children are protected and parental rights are upheld. Below are areas of grave concern: Click here to read the latest WA Draft Mental Health Act ( PDF ). 16 YEAR OLDS TO CONSENT TO PSYCHOSURGERY: Correctly banned in NSW and the NT for all ages, psychosurgery irreversibly damages the brain by incision, burning or inserting electrodes through which an electrical current is sent as in deep brain stimulation (DBS). 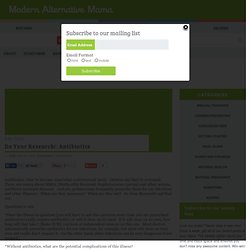 Doctors say they’re overused. There are scares about MRSA (Methycillin Resistant Staphyloccocus Aureus) and other serious, antibiotic-resistant diseases. And yet, pediatricians frequently prescribe them for ear infections and other illnesses. Goodnight Autism. Goodnight Autism Goodnight room Goodnight moon Goodnight cow jumping over the moon At my kitchen sink contemplating dinnertime the other night, it hit me like a meteor shower. 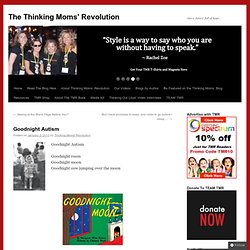 All over the world there were moms like me gearing up for the night time routine with an Autistic child. Baby's birth day can be risky if rushed, hospitals are told. Change, in the health-care world, typically comes slowly. 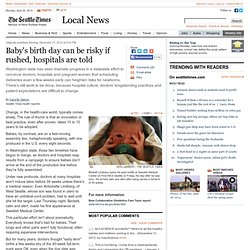 The rule of thumb is that an innovation or best practice, even after proven, takes 10 to 15 years to be adopted. Babies, by contrast, are on a fast-moving assembly line, metaphorically speaking, with one produced in the U.S. every eight seconds. In Washington state, those two timelines have begun to merge, as doctors and hospitals reap results from a campaign to ensure babies don't arrive at the end of the production line before they're fully assembled. Under new protocols, doctors at many hospitals won't induce labor before 39 weeks unless there's a medical reason.