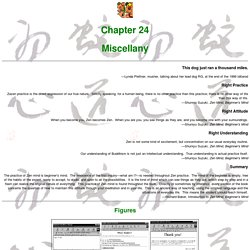 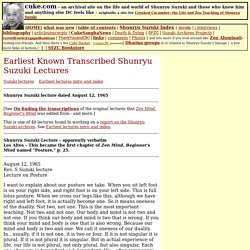 August 12, 1965 Rev. S Suzuki lecture Lecture on Posture I want to explain about our posture we take. When you sit left foot is on your right side, and right foot is on your left side. This is full lotus posture. Some people may say, "our mind or our soul exists forever but my physical body will die". So when we take this posture it symbolizes this truth. If you try to be …if you try to keep this posture you will find some difficulty in taking your natural breathing, but by the time you get accustomed to the right posture you can take natural deep breathing. We must exist right here. How every thing exists in the right place is when we have our body and mind everything else will exist in the right place. So your posture should not be leaned over backward. When you try to attain something your mind starts to wandering about somewhere else. The Complete Shobogenzo. Thezensite: The Shōbōgenzō The Shōbōgenzō (Treasury of the True Dharma Eye) is the master work of the Japanese Sōtō Zen Master Eihei Dōgen (1200 - 1253). 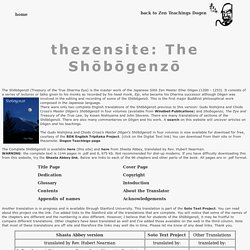 The Dharma Teachings of Kodo Sawaki. From: The Notebook of Kodo Sawaki Eternal satori is included, and rests only in the practice of the moment.Zazen means to practice that which cannot be explained. 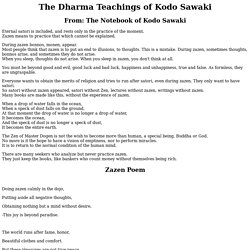 During zazen bonnos, monen, appear.Most people think that zazen is to put an end to illusions, to thoughts. This is a mistake. During zazen, sometimes thoughts, bonnos arise, and sometimes they do not arise.When you sleep, thoughts do not arise. When you sleep in zazen, you don't think at all. Suzuki Roshi Dharma Talks. Shunryū Suzuki-rōshi Thursday, July 29, 1965 Lecture B Soko-ji Temple, San Francisco Listen to this talk: Suzuki-roshi 65-07-29 2nd Talk [Are there any][1] questions so far I talked? 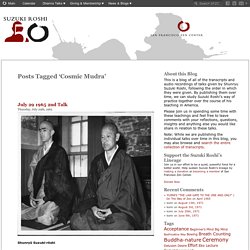 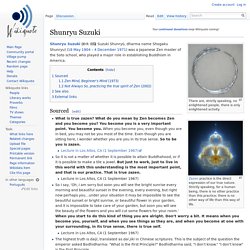 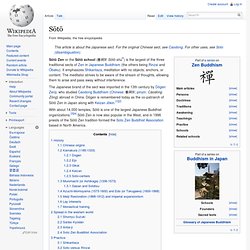 Is the largest of the three traditional sects of Zen in Japanese Buddhism (the others being Rinzai and Ōbaku). It emphasizes Shikantaza, meditation with no objects, anchors, or content. The meditator strives to be aware of the stream of thoughts, allowing them to arise and pass away without interference. The Japanese brand of the sect was imported in the 13th century by Dōgen Zenji, who studied Caodong Buddhism (Chinese: 曹洞宗; pinyin: Cáodòng Zōng) abroad in China. Dōgen is remembered today as the co-patriarch of Sōtō Zen in Japan along with Keizan Jōkin. Zen Practice. Shikantaza. Shikantaza (只管打坐?) 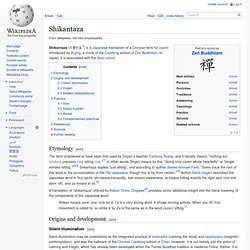 Is a Japanese translation of a Chinese term for zazen introduced by Rujing, a monk of the Caodong school of Zen Buddhism. In Japan, it is associated with the Soto school. Etymology[edit] The term is believed to have been first used by Dōgen's teacher Tiantong Rujing, and it literally means, "nothing but (shikan) precisely (da) sitting (za). A translation of "shikantaza" offered by Kobun Chino Otogawa[6] provides some additional insight into the literal meaning of the components of the Japanese word: Zen_reading0903. Shikantaza Hakuun Yasutani The Fukanzazengi by Dogen Zenji is good instruction, but is very difficult to understand. 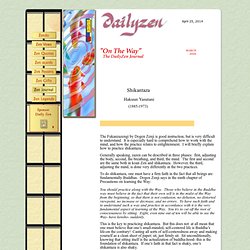 It is especially hard to comprehend how to work with the mind, and how the practice relates to enlightenment. I will briefly explain how to practice shikantaza. Shikantaza（Just Sitting） - key_terms01.pdf. Shunryu Suzuki. There are, strictly speaking, no enlightened people, there is only enlightened activity. 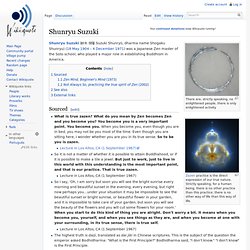 Shunryu Suzuki (鈴木 俊隆 Suzuki Shunryū, dharma name Shogaku Shunryu) (18 May 1904 – 4 December 1971) was a Japanese Zen master of the Soto school, who played a major role in establishing Buddhism in America. Sourced[edit] Zazen practice is the direct expression of our true nature. Strictly speaking, for a human being, there is no other practice than this practice; there is no other way of life than this way of life. So it is not a matter of whether it is possible to attain Buddhahood, or if it is possible to make a tile a jewel.

Zen Mind, Beginner's Mind (1973)[edit] In the beginner's mind there are many possibilities, in the expert's there are few. Not Always So, practicing the true spirit of Zen (2002)[edit] When we do not expect anything we can be ourselves. See also[edit] External links[edit] Suzuki Roshi's Teaching of Shikantaza. For the last two hundred years in Japanese Soto Zen, the understanding of most teachers has been that shikantaza, literally translated as “just sitting,” was Dogen Zenji’s essential practice. In accord with this mainstream understanding, Suzuki Roshi established shikantaza as our essential practice as well. A great deal of his teaching was intended to help us understand what it means to practice just sitting in its true sense. He also told us that his main job as a Zen priest was to encourage people to practice just sitting.

He would often say that our practice is just to sit. Then he would say that this may sound easy, but that actually it is rather difficult to understand what it means to just sit. Suzuki Roshi taught that in order to actualize our way of just sitting by being ourselves, we must express ourselves fully. To be fully ourselves in this formal student-teacher relationship both must assert themselves completely and recognize each other fully. From Wind Bell Vol. Dōgen. Dōgen Zenji (道元禅師; also Dōgen Kigen 道元希玄, or Eihei Dōgen 永平道元, or Koso Joyo Daishi) (19 January 1200 – 22 September 1253) was a Japanese Zen Buddhist teacher born in Kyōto.

He founded the Sōtō school of Zen in Japan after travelling to China and training under Rujing, a master of the Chinese Caodong lineage. Dōgen is known for his extensive writing including the Treasury of the Eye of the True Dharma or Shōbōgenzō, a collection of ninety-five fascicles concerning Buddhist practice and enlightenment. Biography[edit] Early life[edit] Dōgen was probably born into a noble family, though as an illegitimate child of Minamoto Michitomo, who served in the imperial court as a high-ranking ashō (亞相? Early training[edit] At some later point, Dōgen became a low-ranking monk on Mount Hiei, the headquarters of the Tendai school of Buddhism. Dogen's Reflecting Pool. Explaining the path to Enlightenment is the mission of every Buddhist teacher since the time of the historical Buddha. From the San-lun school, to the teaching of Dogen Zenji, great thinkers attempt to relate their understanding of the Two-fold Truth and illuminate the most efficient path to Enlightenment.

Dogen, the eminent Soto Zen philosopher, takes the general understanding of the twofold truth: The existence of a discursive, dual world of form A world of non-dual emptiness and sheds new light on the relationship between form and emptiness. He proposes that emptiness is manifested through the acceptance of distinctions and the discursive world.

For Dogen, distinctions illuminate the fundamental emptiness. When one understands that one lives in a discursive world, then one can feel the basic emptiness.