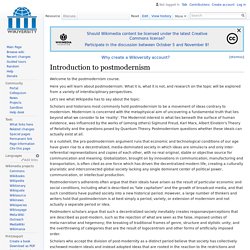 Here you will learn about postmodernism. What it is, what it is not, and research on the topic will be explored from a variety of interdisciplinary perspectives. Let's see what Wikipedia has to say about the topic: Scholars and historians most commonly hold postmodernism to be a movement of ideas contrary to modernism. Modernism is concerned with the metaphysical aim of uncovering a fundamental truth that lies beyond what we consider to be 'reality'. In a nutshell, the pro-postmodernism argument runs that economic and technological conditions of our age have given rise to a decentralized, media-dominated society in which ideas are simulacra and only inter-referential representations and copies of each other, with no real original, stable or objective source for communication and meaning.

There are often strong political overtones to this debate, with conservative commentators often being the harshest critics of post-modernism. Collaborators[edit] General Introduction to Postmodernism. Watsuji TetsurÃ´ 1. 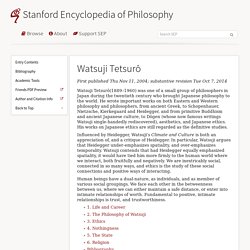 Life and Career Watsuji Tetsurō (1889–1960) was one of a small group of philosophers in Japan during the twentieth century who brought Japanese philosophy to the attention of the world. In terms of his influence, exemplary scholarship, and originality he ranks with Nishida Kitarō, Tanabe Hajime, and Nishitani Keiji. The latter three were all members of the so-called ‘Kyoto School,’ and while Watsuji is not usually thought of as being a member of this school, the influence and tone of his work clearly shows him to be a like-minded thinker.

The Kyoto School, of which Nishida was the pioneering founder, is so identified because of its common focus; Nishida's important work, East/West comparative philosophy, and an on-going attempt to give expression to Japanese ideas and concepts by means of the clarity afforded by Western philosophical tools and techniques. Modern and Postmodern Architecture: Overview. Architecture in Georgia during the last four decades of the twentieth century evidenced a continuing interest in traditional forms for much residential architecture, while the state's architects built modern workplaces in the latest contemporary styles. 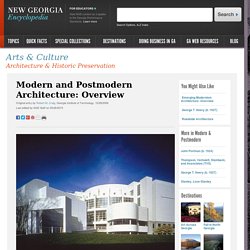 This interaction between the conservative attitudes expressing lingering Old South values and the progressive viewpoints promoting the latest image of contemporary styling and newly published architectural forms resulted in a split between the "classicists" and "moderns" in Georgia. Moderns versus Classicists and Historic Preservation The battle lines that emerged when modern development accosted traditional neighborhoods and historic districts gave rise to the historic preservation movement.

The new architecture, according to the classicists, brought about a numbing of sensibilities with regard to traditional design values and issues of compatibility. Teach Yourself Postmodernism by Glenn Ward. Postmodernism. 1. 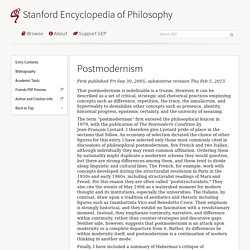 Precursors The philosophical modernism at issue in postmodernism begins with Kant's “Copernican revolution,” that is, his assumption that we cannot know things in themselves and that objects of knowledge must conform to our faculties of representation (Kant 1787). Ideas such as God, freedom, immortality, the world, first beginning, and final end have only a regulative function for knowledge, since they cannot find fulfilling instances among objects of experience. With Hegel, the immediacy of the subject-object relation itself is shown to be illusory. As he states in The Phenomenology of Spirit, “we find that neither the one nor the other is only immediately present in sense-certainty, but each is at the same time mediated” (Hegel 1807, 59), because subject and object are both instances of a “this” and a “now,” neither of which are immediately sensed. Many postmodern philosophers find in Heidegger a nostalgia for being they do not share. 2.

In “What is Postmodernism? 3. 4. 5. 6. 7. 8. Watsuji Tetsurô. Postmodernism. Considered a reactionary movement opposed to modernism, which is increasingly thought of as sterile and totalitarian, Postmodernism is an intellectual, cultural movement, whose beginnings are rooted in the latter half of the twentieth century. 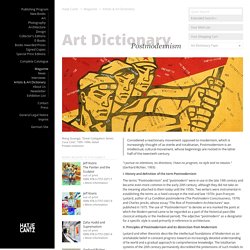 "I pursue no intentions, no directions; I have no program, no style and no mission. " (Gerhard Richter, 1993) I. History and definition of the term Postmodernism The terms "Postmodernism" and "postmodern" were in use in the late 19th century and became even more common in the early 20th century, although they did not take on the meaning attached to them today until the 1950s.

II. Lyotard and other theorists describe the intellectual foundations of Modernism as an unshakable belief in constant progress toward an increasingly detailed understanding of he world and a gradual approach to comprehensive knowledge. III. The demand for an open-ended concept of art and the individual work of art opens up a virtually unlimited range of possibilities. IV. V.