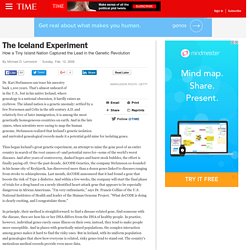 Kari Stefansson can trace his ancestry back 1,100 years. That's almost unheard of in the U.S., but in his native Iceland, where genealogy is a national obsession, it hardly raises an eyebrow. The island nation is a genetic anomaly: settled by a few Norsemen and Celts in the 9th century A.D. and relatively free of later immigration, it is among the most genetically homogeneous countries on earth. 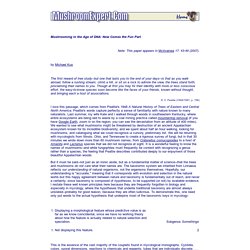 Though at first you may fix their identity with more or less conscious effort, the easy-to-know species soon become like the faces of your friends, known without thought, and bringing each a host of associations. D. I love this passage, which comes from Peattie's 1948 A Natural History of Trees of Eastern and Central North America. But it must be said--not just as an ironic aside, but as a fundamental matter of science--that the trees and mushrooms do not care what their names are. Structure of the Double Helix - GeneEd - Genetics, Education, Discovery. Smith, A. R. (2008). Nucleic Acids to Amino Acids: DNA Specifies Protein. Nature Education, 1, 126. <br/> - References - Scientific Research Publish. TITLE: Parallels between Confucian Philosophy and Quantum Physics AUTHORS: Sung Jang Chung KEYWORDS: Confucian Philosophy; Quantum Physics; Entanglement; I Ching; Jeong Yeok; Ultron-Logotron Theory; Theory of Everything; Precognitive Dream; Probacent Model JOURNAL NAME: Open Journal of Philosophy, Vol.4 No.2, May 29, 2014 ABSTRACT: A scientific relationship between the Eastern Confucian philosophy and quantum physics is not clearly known in science and philosophy because of lack of concrete data that would substantially enable us to clearly explain it. 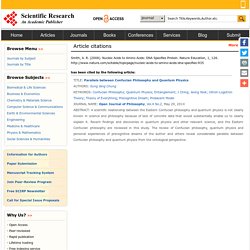 Recent findings and discoveries in quantum physics and other relevant science, and the Eastern Confucian philosophy are reviewed in this study. The Double Helix. The race to figure out the structure of DNA ended when a young American biochemist named James Watson and a British physicist named Francis Crick published a short paper in 1953. 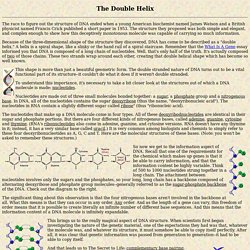 The structure they proposed was both simple and elegant, and complex enough to show how this deceptively monotonous molecule was capable of carrying so much information. ARID Proteins: A Diverse Family of DNA Binding Proteins Implicated in the Control of Cell Growth, Differentiation, and Development. Cell Growth & Differentiation Vol. 13, 95-106, March 2002 © 2002 American Association for Cancer Research. 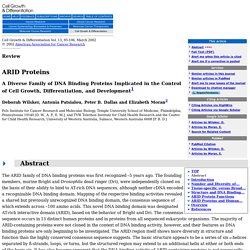 RNA Takes First Place. Biology concepts – nucleic acids, DNA, RNA, central dogma of molecular biology, ribozyme, RNA world hypothesis Did you know that there are more than 155.3 million informational items (books and such) in the Library of Congress? 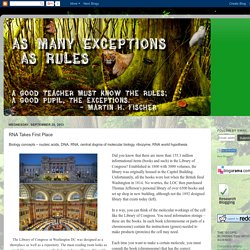 Established in 1800 with 3000 volumes, the library was originally housed in the Capitol Building. Unfortunately, all the books were lost when the British fired Washington in 1814. No worries, the LOC then purchased Thomas Jefferson’s personal library of over 6500 books and set up shop in new building, although not the 1892 designed library that exists today (left). In a way, you can think of the molecular workings of the cell like the Library of Congress. Each time you want to make a certain molecule, you must consult the book (chromosome) that has the correct instruction page (DNA gene). You could keep many copies of each book, maybe thousands, but this would take up too much room. Cells take this library/nucleic acid analogy further. Nucleic acids – Nucleic acid notation. The nucleic acid notation currently in use was first formalized by the International Union of Pure and Applied Chemistry (IUPAC) in 1970.[1] This universally accepted notation uses the Roman characters G, C, A, and T, to represent the four nucleotides commonly found in deoxyribonucleic acids (DNA). 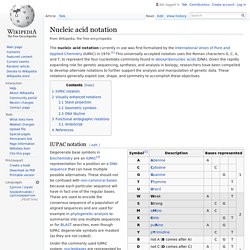 Given the rapidly expanding role for genetic sequencing, synthesis, and analysis in biology, researchers have been compelled to develop alternate notations to further support the analysis and manipulation of genetic data. These notations generally exploit size, shape, and symmetry to accomplish these objectives. IUPAC notation[edit] Degenerate base symbols in biochemistry are an IUPAC[2] representation for a position on a DNA sequence that can have multiple possible alternatives. These should not be confused with non-canonical bases because each particular sequence will have in fact one of the regular bases. Visually enhanced notations[edit] Stave projection[edit] Geometric symbols[edit]