The Next Big Social Idea: Unconditional Basic Income  In 2014, serious voices from Pope Francis to Thomas Piketty, in his book Capital in the Twenty-First Century, have lamented ever-widening inequality. 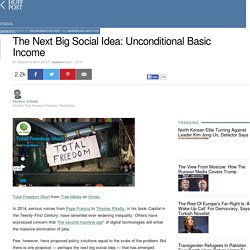 The Dutch “basic income” experiment is expanding across multiple cities. Foodie culture may be easy to ridicule, but it demands more than just a gentrifying neighborhood and an appreciation for the finer things: It requires business savvy. 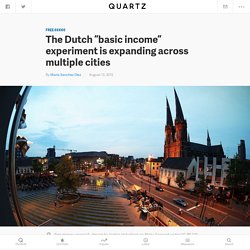 This may not be apparent to those who misunderstand the direction the economy is taking, but when the robots come for our jobs, there will be real economic value in the ability to poach the perfect egg. (Watson may be good at devising recipes but it has yet to hit that sweet spot between a runny yolk and a crumbly one.) Quartz recently sat down with the owners of three successful businesses in Brooklyn, New York City’s notoriously hip borough: Carolyn Bane, who opened the restaurant Pies ‘n’ Thighs with partner Sarah Sanneh; George Weld, the founding chef and owner of the restaurant Egg; and Beth Lewland, who operates the craft beer and fine-foods store Eastern District with her husband. Here’s some of what they learned: Learn from coworkers—even if you have to pay for it Gain situational awareness. 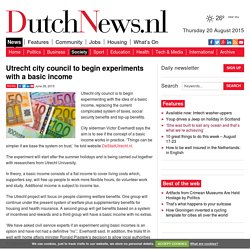 City alderman Victor Everhardt says the aim is to see if the concept of a basic income works in practice. ‘Things can be simpler if we base the system on trust,’ he told website DeStadUtrecht.nl. Finland considers basic income to reform welfare system - BBC News. Free money might be the best way to end poverty. In May 2009, a small experiment involving 13 homeless men took off in London. 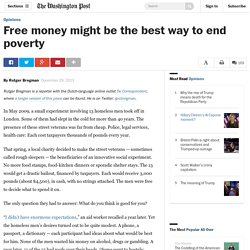 Some of them had slept in the cold for more than 40 years. The presence of these street veterans was far from cheap. Police, legal services, health care: Each cost taxpayers thousands of pounds every year. That spring, a local charity decided to make the street veterans — sometimes called rough sleepers — the beneficiaries of an innovative social experiment. No more food stamps, food-kitchen dinners or sporadic shelter stays. Breaking With the Economic Beatitude: Refutations of Some Prevailing Notions Against the Basic Income.

I’ve written elsewhere on the subject of immaterial hurdles facing the argument for the basic income guarantee [µ]. 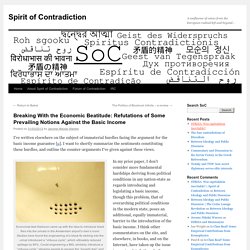 I want to shortly summarize the sentiments constituting these hurdles, and outline the counter-arguments I’ve given against these views. Economist Aad Kieboom came up with the idea to introduce black flies into the urinals in the Amsterdam airport’s men’s room. Studies have found the engineering of a black fly etching into the urinal introduced a “virtuous cycle”, which ultimately reduced spillage by 80%. Could engineering a BIG, similarly, introduce a “virtuous cycle,” allowing people to escape the “poverty trap” and improve their general lot? I’ve written previously mainly in regards to two particular perceptions which have implications on the movement. Finnish Archipelago Considers Experimenting Basic Income. Local Finnish authorities at Åland, a Swedish speaking archipelago between Finland and Sweden mainland, are considering, within their territory, the creation of a special fiscal zone where basic income-like social experiments could be performed. 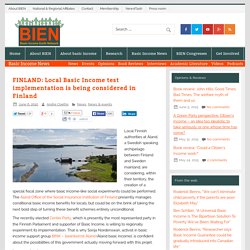 The Åland Office of the Social Insurance Institution of Finland presently manages conditional basic income benefits for locals, but could be on the brink of taking the next bold step of turning these benefit schemes entirely unconditional. The recently elected Center Party, which is presently the most represented party in the Finnish Parliament and supporter of Basic Income, is willing to regionally experiment its implementation. 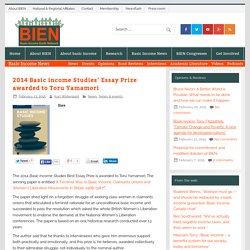 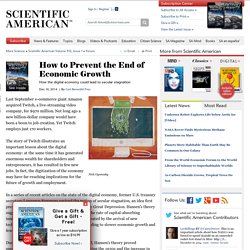 Not long ago a new billion-dollar company would have been a boon to job creation. Yet Twitch employs just 170 workers. The story of Twitch illustrates an important lesson about the digital economy: at the same time it has generated enormous wealth for shareholders and entrepreneurs, it has resulted in few new jobs. SWITERLAND: Government reacts negatively to UBI proposal. -From grundeinkommen.ch The Swiss Federal Council has released its evaluation of the popular initiative for an unconditional basic income (UBI), which received enough signatures last fall to trigger a nationwide referendum on it. 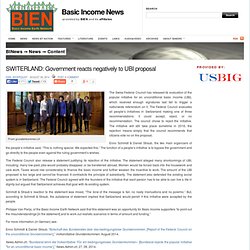 The Federal Council evaluates all people’s initiatives in Switzerland making one of three recommendations: it could accept, reject, or no recommendation. The council chose to reject the initiative. Money for nothing: Mincome experiment could pay dividends 40 years on. DAUPHIN, Manitoba ­— Once a month during the late 1970s, Amy Richardson received an envelope with a little extra cash to help her family make ends meet. 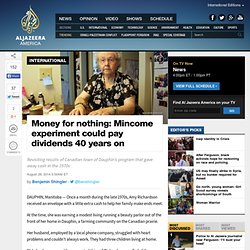 At the time, she was earning a modest living running a beauty parlor out of the front of her home in Dauphin, a farming community on the Canadian prairie. Her husband, employed by a local phone company, struggled with heart problems and couldn’t always work. They had three children living at home. A citizen's income of £71 a week per person would make Britain fairer. What would you do with an extra £71 per week? That’s the question posed by The Citizen’s Income Trust, an organisation that promotes debate on the concept of a universal income for Britain, with citizenship as the only basis of entitlement. The Trust proposes a radical reform of the national welfare system, suggesting the annual spend on benefits should be distributed equally among all citizens, regardless of their income or employment status. Under their proposals, 0-24 year olds would receive £56.25 per week, 25-64 year olds would receive £71 per week and those 65 and over would receive £142.70 per week.

An idea for the second machine age: a guaranteed standard of living for all. One of the more uplifting things about the United States - in contrast to Europe, where a dreary political consensus around the social market, big government model remains supreme - is that it is still alive with libertarian ideas, some of which even gain a little traction, or at least temporarily hold back the rising tide of welfare. Among the more interesting and fashionable right now is that of the Basic Income Guarantee, or BIG for short. Now this is not obviously a free market proposal, as its chief proponent, Professor Matt Zwolinski of the University of San Diego, readily admits. Nor is it entirely new, in that it has strong parallels with Milton Friedman’s advocacy of negative income tax rates back in the 1970s. THE ABOLITION OF WORK. 85% of natural products to be banned – please act now. Even if you do not live in South Africa, if you can spare 30 seconds to sign this petition, you will be helping the public and practitioners in South Africa to stop these regulations which ban, among many natural medicines, all digestive enzymes, many amino acids including 5-HTP and even more herbs and natural medicines.

Additionally, the new legislation hugely restricts levels of several key vitamins and minerals. For example, it outlaws chromium above 50mcg, B12 above 100mcg, and vitamin C above a daily dose of 1,000mg. There is no logical reason for doing this, other than to stop natural medicines and drive people to take pharmaceutical medicines instead. The reason it is important to lend your support by signing the petition is that we need to tell Health Ministers that we will not tolerate such totally unnecessary restrictions on Complementary and Alternative medicines, which are both safe and actually reduce the burden of disease on the health service.

A German Guy Wants to Give You a Bunch of Money for Nothing. Photo by Jannismayr.de What would happen if we didn't have to worry about making a living anymore? Would people just sit on their asses all day or actually do something meaningful with their lives? Michael Bohmeyer, a 29-year-old founder of a tech startup in Berlin, wanted to find out. After he stopped working earlier this year to live off the $1,300 he makes from his startup each month, Bohmeyer says his life has radically changed. So he started “My Basic Income”, a new initiative looking to raise enough money to pay someone $1,300 a month for a year, no strings attached. A Town Without Poverty?: Canada's only experiment in guaranteed income finally gets reckoning. September 5, 2011.

Would a citizen’s income be better than our benefits system? Citizen’s Income Trust Conference 2014 Livestream. The Fetishisation of Work Has To Stop. « The death of a young man and the following media coverage highlights fundamental problems with our society, Thomas Barlow writes. Martin Hadfield’s death was the natural result of a society that fetishes ‘work’ above all else. How about a 'citizen's income' instead of benefits? Basic income is something for nothing – why does anyone deserve that? Should there be a basic income? Every month we invite two experts to debate, and then invite you to join the conversation online.

Barb During my adult life I have been a student, feminist, welfare claimant, waitress, journalist, community organizer, mother – all of them with little income or none. How to Win the War on Poverty - Fugitive Moments. But even before neoliberal reforms gutted War on Poverty programs beginning in the 1970s, Johnson’s war never really succeeded. Even as his reforms went into effect, cities across the country exploded in riots as the violence of entrenched poverty became starkly visible. Ten Reasons to Support Basic Income - Basic Income UK. 1) Basic Income will help us rethink how & why we work A basic income can help you do other work and reconsider old choices: It will enable you to retrain, safe in the knowledge that you’ll have enough money to maintain a decent standard of living while you do. It will therefore help each of us to decide what it is we truly want to do. 2) Basic Income will contribute to better working conditions.

Free money is no longer the stuff of utopia. Ed Dolan's Econ Blog » The Economic Case for a Universal Basic Income (Part 1 of a series) Author: Ed Dolan · · Share This Print. Why we should give free money to everyone. What Happens When the Poor Receive a Stipend? European Citizens' Initiative for an Unconditional Basic Income. Free Money for All - The Only Way Forward on Welfare.