TPP. TTIP. Rough trade: the new corporate power grab. The World Trade Organisation (WTO) was little known when its 1999 summit brought campaigners from across the world to Seattle to confront the trade liberalisation agenda. 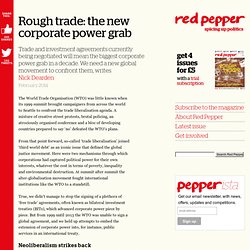 A mixture of creative street protests, brutal policing, an atrociously organised conference and a bloc of developing countries prepared to say ‘no’ defeated the WTO’s plans. From that point forward, so-called ‘trade liberalisation’ joined ‘third world debt’ as an iconic issue that defined the global justice movement. Here were two mechanisms through which corporations had captured political power for their own interests, whatever the cost in terms of poverty, inequality and environmental destruction. At summit after summit the alter-globalisation movement fought international institutions like the WTO to a standstill. True, we didn’t manage to stop the signing of a plethora of ‘free trade’ agreements, often known as bilateral investment treaties (BITs), which advanced corporate power piece by piece.

The fight this time. El Salvadorian Activists Protest TPP-Like Lawsuit: How The Pacific Rim Arbitration Case Is A Preview Of The Trans-Pacific Partnership. Protesters outside of the Australian Embassy in D.C. 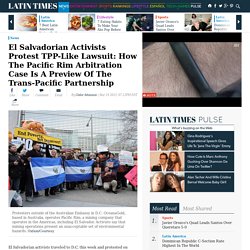 OceanaGold, based in Australia, operates Pacific Rim, a mining company that operates in the Americas, including El Salvador. Activists say that mining operations present an unacceptable set of environmental hazards. Oxfam/Courtesy El Salvadorian activists traveled to D.C. this week and protested on March 19th against a lawsuit brought against their government by OceanaGold’s mining company Pacific Rim. The lawsuit aims to recoup over $300 million in potential lost revenue after the company failed to obtain a mining permit.

The lawsuit comes as 11 countries, including the U.S., Japan, Peru, Australia and others consider Trans-Pacifica Partnership free trade agreement. If you’re trying to understand how TPP’s would work, the World Bank’s ICSID is a rough sketch, a beta-test of ISDS arbitration. This Is What Happened In El Salvador As the Latin Times’ Susmita Baral explained last September: Environmental And Human Rights Concerns Of TPP. El Salvador groups accuse Pacific Rim of 'assault on democratic governance' A multinational mining company has been accused of launching "a direct assault on democratic governance" by suing El Salvador for more than US$300m (£179m) in compensation, after the tiny Central American country refused to allow it to dig for gold amid growing opposition to the exploitation of its mineral wealth. 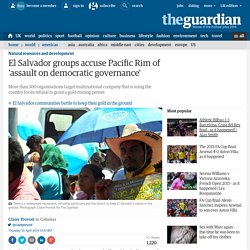 More than 300 NGOs, trade unions and civil society groups have signed a strongly worded letter accusing the Canada-based company Pacific Rim of using a little-known international tribunal to "subvert a democratic nationwide debate over mining and environmental health". Pacific Rim, now owned by OceanaGold, a Canadian-Australian firm, applied in 2004 for a permit to start operations at its El Dorado mine in the northern province of Cabañas. The company seeks $301m from El Salvador in a protracted investment dispute that began in 2009. Pacific Rim claims El Salvador violated its own investment law by not issuing it a permit to dig for gold at the El Dorado mine. Lawsuit against El Salvador mining ban highlights free trade pitfalls. El Salvador is an impoverished country, but its citizens live above riches: the country has an estimated 1.4m ounces of gold buried underground, as well as silver and copper. 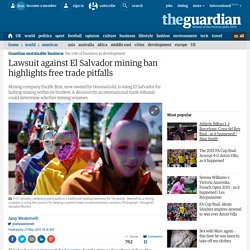 It may be surprising, then, that no mining is allowed. In 2008, after mining operations polluted the water supply in San Sebastián, sparking a clean water crisis, then-president Antonio Saca stopped issuing new mining permits. Its legislature has considered and failed to pass an official moratorium or permanent ban on mining since then, but the government has continued to deny all permit applications. Environmentalists want to keep El Salvador mining-free. As the smallest country in Central America, and one that is densely populated, El Salvador is particularly vulnerable to environmental degradation. In the mid-2000s, Canada-based mining giant Pacific Rim began exploring for gold in El Salvador. Pacific Rim, saying it had done its due diligence on environmental impacts, pleaded with the government to reconsider.