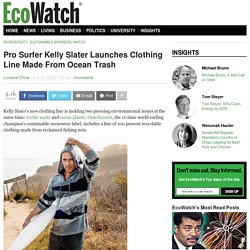 Outerknown, the 11-time world surfing champion’s sustainable menswear label, includes a line of 100 percent recyclable clothing made from reclaimed fishing nets. “I created Outerknown to smash the formula,” Slater, who parted ways with longtime sponsor Quiksilver to launch his own brand, said on the company’s website. “To lift the lid on the traditional supply chain, and prove that you can actually produce great looking menswear in a sustainable way.”

The brand’s Evolution Series features board shorts and jackets made with Econyl, a new type of nylon yarn that’s made from old nets, carpet and other nylon waste, Fast Company reported. These clothes can be upcycled over and over into new clothing. According to the Marine Mammal Center, abandoned fishing nets, also known as “ghost nets,” account for approximately 10 percent of all marine debris. NowThis. Brazilian beans and Japanese barley shipped to Svalbard seed vault. A Noah's Ark of 20,000 plant species will unload this week at a remote Arctic port to deposit humanity's latest insurance payment against an agricultural apocalypse or a man-made cock-up. 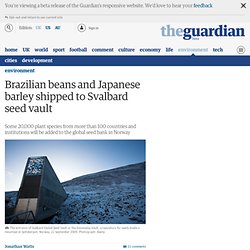 Brazilian beans and Japanese barley are among the botanical varieties that are carried aboard the ship that is shortly expected to dock near the Svalbard global seed vault, that celebrates its sixth anniversary this week. The facility, which is bored into the side of a mountain by the Barents Sea, is primarily designed as a back-up for the many gene banks around the world that keep samples of crop diversity for agricultural businesses.

But its operators, the Global Crop Diversity Trust, say the "Doomsday Vault" could also help to reboot the world's farms in the event of a climate catastrophe or a collapse of genetically modified crops. One tree at a time: restoring the forest of Caledon - Green Living. It's not these trees that make the forest, but their progeny. 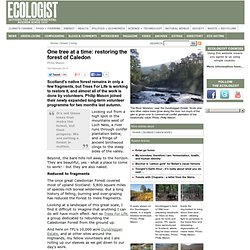 We are setting a forest in motion. Looking out from a high spot in the mountains west of Loch Ness, a river runs through conifer plantation below, and a fringe of ancient birchwood clings to the steep sides of the valley. Beyond, the bare hills roll away to the horizon. They are beautiful, yes - what a place to come to work! - but they are also naked. Reduced to fragments The once great Caledonian Forest covered most of upland Scotland: 5,800 square miles of species-rich boreal wilderness. Looking at a landscape of this great scale, I find it difficult to imagine that anything I can do will have much effect. And here on TFL's 10,000 acre Dundreggan Estate, and at other sites around the Highlands, my fellow volunteers and I are rolling up our sleeves as we get down to our day's work. Exotics out! There's more to restoring forest than planting trees. 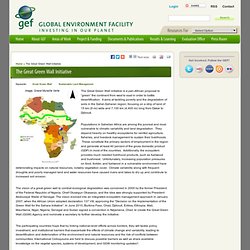 It aims at tackling poverty and the degradation of soils in the Sahel-Saharan region, focusing on a strip of land of 15 km (9 mi) wide and 7,100 km (4,400 mi) long from Dakar to Djibouti. Populations in Sahelian Africa are among the poorest and most vulnerable to climatic variability and land degradation. They depend heavily on healthy ecosystems for rainfed agriculture, fisheries, and livestock management to sustain their livelihoods. These constitute the primary sectors of employment in the region and generate at least 40 percent of the gross domestic product (GDP) in most of the countries. Additionally, the ecosystem provides much needed livelihood products, such as fuelwood and bushmeat. Progress is apparent especially in the Zinder region of Niger, where tree density has significantly improved since the mid-1980s. 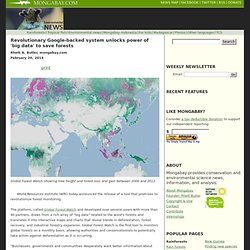 World Resources Institute (WRI) today announced the release of a tool that promises to revolutionize forest monitoring. The platform, called Global Forest Watch and developed over several years with more than 40 partners, draws from a rich array of "big data" related to the word's forests and translates it into interactive maps and charts that reveal trends in deforestation, forest recovery, and industrial forestry expansion.

Global Forest Watch is the first tool to monitors global forests on a monthly basis, allowing authorities and conservationists to potentially take action against deforestation as it is occurring. "Businesses, governments and communities desperately want better information about forests. Now, they have it," said Andrew Steer, WRI President and CEO, in a statement. "[To produce that databaset] we analyzed... almost 700,000 Landsat images," Moore said. Logging concessions in Liberia.