The Battle of Shiloh notes. Christine Jorgensen sex change: 60th anniversary of world's first SEX CHANGE that turned shy New York gent into blonde starlet. George Jorgensen shocked the U.S. in December 1952 by transforming into a glamorous woman named ChristineFormer soldier read about a Danish doctor who was experimenting with sex change therapy using animals and booked a ticket to CopenhagenAfter taking female hormones, Jorgensen underwent a series of operations to transform her genitals from male to femaleHer family, the media and the public were generally supportive of her decision and she was embraced by Hollywood By Helen Pow Published: 00:08 GMT, 2 December 2012 | Updated: 15:06 GMT, 5 December 2012 It's been 60 years since the world's first successful sex change operation transformed a quiet New York gent into a slender, blonde glamourpuss. 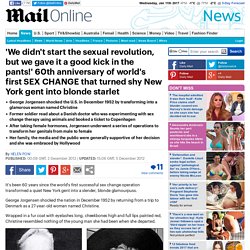 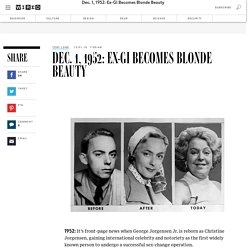 Jorgensen, who grew up in the Bronx, in her words, a “frail, tow-headed, introverted little boy who ran from fistfights and rough-and-tumble games,” was drafted into the Army just after World War II. Military service only reinforced Jorgensen’s belief that she was, in fact, a woman trapped inside a man’s body. After receiving her discharge, Jorgensen returned home and first heard about “sex-reassignment surgery,” which was being performed only in Sweden. (It was illegal almost everywhere else, including the United States.) 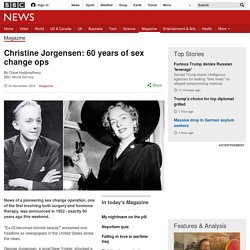 "Ex-GI becomes blonde beauty! " screamed one headline as newspapers in the United States broke the news. Christine Jorgensen. America trusted not only in God, on December 1, 1952. 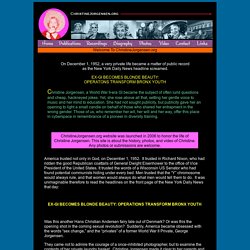 It trusted in Richard Nixon, who had ridden the good Republican coattails of General Dwight Eisenhower to the office of Vice President of the United States. It trusted the words of a Wisconsin US Senator who had found potential communists hiding under every bed. Men trusted that the “Y” chromosome would always rule, and that women would always do what men would tell them to do.

It was unimaginable therefore to read the headlines on the front page of the New York Daily News that day: Was this another Hans Christian Andersen fairy tale out of Denmark? They came not to admire the courage of a once-inhibited photographer, but to examine the contents of her private laundry basket. There was a lot to consider on that fateful day in December. The New York Daily News had come across a hand-delivered private letter sent by Jorgensen to her parents. Christine Jorgensen - Transgender celebs you need to know - Pictures. British model Caroline Cossey was born Barry Kenneth Cossey in 1954, and raised as a boy in Norfolk, England. 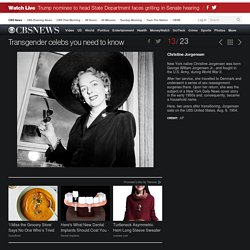 When Cossey hit puberty, however, she began to look distinctly feminine, due to a condition, called Klinefelter's syndrome, and consequently suffered many confusing thoughts and instances of bullying at the hands of her peers. Ending her formal schooling at the age of 15, Cossey moved to London at 16 and began taking hormones at 17. Then after undergoing sex reassignment surgery in 1974, Cossey began both living and working as a woman, concealing her past as a male.

She experienced much success as a showgirl and a glamour model, appearing in Harper's Bazaar, The Sun, Playboy and even the James Bond film "For Your Eyes Only. " However, after the Bond film's release, the British tabloid News of the World outted her with a front page headline that read, "James Bond Girl Was a Boy. " Christine Jorgensen - Wikipedia. She returned to the United States in the early 1950s and her transformation was the subject of a New York Daily News front-page story. 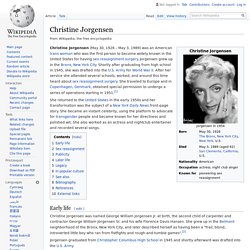 She became an instant celebrity, using the platform to advocate for transgender people and became known for her directness and polished wit. She also worked as an actress and nightclub entertainer and recorded several songs. Early life[edit] The first transgender celebrity in America and her remarkable life. Christine Jorgensen (1927 – 1989) - Life Story - Transsexual Woman. The Christine Jorgensen Story – Birth 1926-05-30 Death: 1989-05-03 Christine Jorgensen.

This page has multi-media links Abstract [Full Text] [PDF] Christine Jorgensen (1927 – 1989) Christine Jorgensen was not the first surgically altered transsexual woman and not even the first American transsexual, that award goes back a long way – read about that here, but she did change what being transsexual meant in press terms. On December 1, 1952, news of her ‘sex change’ in Denmark made front page news. Born George Jorgenson to Danish-American parents ‘he’ joined the army in 1945. Denmark was the only place George could go to have surgery as castration was used to treat sex offenders there. Letters began to flood in from all over the world for Christine and the postal workers refused to deliver them apart from one person called Stanton who was simply curious and was quizzed by his colleagues as to her daily appearance at the postal depot where he worked.

Celebrity As she herself noted years later. Christine Jorgensen · Challenging Gender Boundaries: A Trans Biography Project · outhistory.org. By Stephanie Barajas During the 1950’s, Christine Jorgensen’s story brought the matter of sex change to the center stage of American public consciousness. 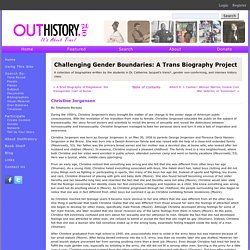 With the revelation of her transition from male to female, Christine Jorgensen educated the public on the subject of transsexuality. Her story forced doctors and scientists to revisit the terms of sexuality and reveal the distinctions between homosexuality and transsexuality. Why Be Just One Sex? - Dictionary definition of Why Be Just One Sex? Gender Issues and Sexuality: Essential Primary Sources COPYRIGHT 2006 Thomson Gale Magazine article By: Gloria Kim Date: September 12, 2005, Source: Kim, Gloria. 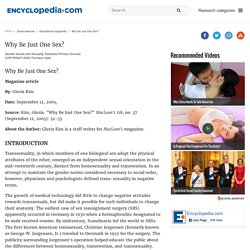 "Why Be Just One Sex? " About the Author: Gloria Kim is a staff writer for MacLean's magazine. Transsexuality, in which members of one biological sex adopt the physical attributes of the other, emerged as an independent sexual orientation in the mid-twentieth century, distinct from homosexuality and transvestism. The growth of medical technology did little to change negative attitudes towards transsexuals, but did make it possible for such individuals to change their anatomy.