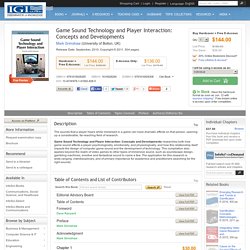 What is a computer game? At base, it is nothing more than a cheap plastic disc encased within a cheaper plastic tray. And the system it is destined for? A box of electronics, lifeless in a corner. Put the two together, though, throw in the player's imagination and interaction, and he or she is delivered of experiences that, to use Diderot's phrase, are “the strongest magic of art.” For the reader interested in that flickering light, there is a plethora of books and scholarly articles on the subject. This book deals with computer game sound by focusing on sound FX rather than game music, except where the music is interactive or otherwise intimately bound up with the playing of the game. 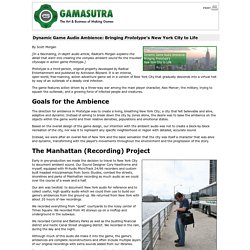 Prototype is a third-person, original property developed by Radical Entertainment and published by Activision Blizzard. It is an intense, open-world, free-roaming, action adventure game set in a version of New York City that gradually descends into a virtual hell by way of an outbreak of a deadly viral infection. The game features action driven by a three-way war among the main player character, Alex Mercer; the military, trying to squash the outbreak; and a growing force of infected people and creatures. The direction for ambience in Prototype was to create a living, breathing New York City; a city that felt believable and alive, adaptive and dynamic. The last tier is what we would call foreground ambience. RC1568.pdf. An introduction to procedural audio and its application in computer games. Game Audio Podcast #4 – Procedural » Gameaudio Podcast. 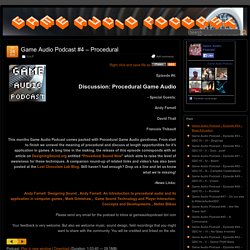 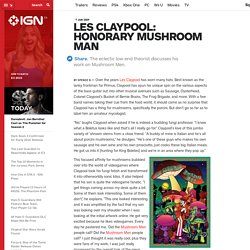 The eclectic low-end theorist discusses his work on Mushroom Men. By Spence D.Over the years Les Claypool has worn many hats. Best known as the lanky frontman for Primus, Claypool has spun his unique spin on the various aspects of the bass guitar out into other musical avenues such as Sausage, Oysterhead, Colonel Claypool's Bucket of Bernie Brains, The Frog Brigade, and more. With a few band names taking their cue from the food world, it should come as no surprise that Claypool has a thing for mushrooms, specifically the porcini.

But don't go so far as to label him an amateur mycologist. "No," laughs Claypool when asked if he is indeed a budding fungi professor. This focused affinity for mushrooms bubbled over into the world of videogames where Claypool took his fungi fetish and transformed it into otherworldly sonic bliss. For the most part it was just Claypool "in my laboratory bangin' away", but he managed to get his kids involved in the musical action a wee bit. Game Audio Podcast #7 – Metronome » Gameaudio Podcast. Episode #7: Discussion: Mushroom Men - Made for the Metronome - Special Guest: Matt Piersall: Gl33k. 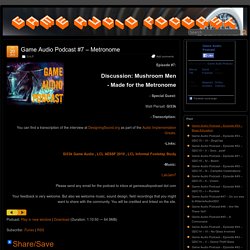 Stanford laptop Orchestra: Fernando, q3osc project. q3osc - demo 2. q3osc - demo 1. q3osc: ccrma.stanford.edu:~rob/q3osc/ In-game Setup Here's a quick run-down of the basic in-game console flags and values that need to be set to stream OSC from the q3osc game server to one or more client sound-servers: To access the in-game console, press the ~ key. 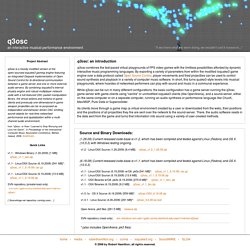 All variable assignments done in the console must be prefaced by a "/". Server-side variables can only be set from the server itself or by a client using rcon. /osc_hostname# [ip-address] Up to 20 OSC output streams can be configured using the /osc_hostname# variables, where # is set 1-20, e.g. Unreal Engine 3 Features. Introduction to OSC. Open Sound Control (OSC) is a protocol for communication among computers, sound synthesizers, and other multimedia devices that is optimized for modern networking technology. 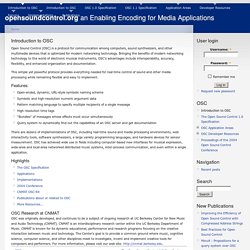 Bringing the benefits of modern networking technology to the world of electronic musical instruments, OSC's advantages include interoperability, accuracy, flexibility, and enhanced organization and documentation. This simple yet powerful protocol provides everything needed for real-time control of sound and other media processing while remaining flexible and easy to implement. Graham Gatheral - Sound Design, Game Audio Engineering and Implementation. Robertkhamilton/udkosc. Audio Implementation Greats #8: Procedural Audio Now. This months Audio Implementation Greats series returns with the overarching goal of broadening the understanding of Procedural Audio and how it can be used to further interactivity in game audio. 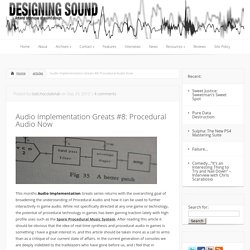 While not specifically directed at any one game or technology, the potential of procedural technology in games has been gaining traction lately with high profile uses such as the Spore Procedural Music System. After reading this article it should be obvious that the idea of real-time synthesis and procedural audio in games is something I have a great interest in, and this article should be taken more as a call to arms than as a critique of our current state of affairs. In the current generation of consoles we are deeply indebted to the trailblazers who have gone before us, and I feel that in acknowledgment of the history of game audio we must do what we can to build on past accomplishments and use everything at our disposal to increase the level of interactivity within our medium.