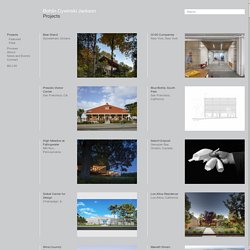 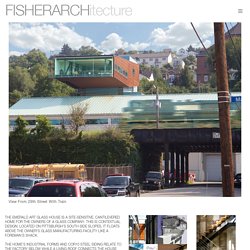 This is contextual design: Located on Pittsburgh’s South Side slopes, it floats above the owner’s glass manufacturing facility like a foreman’s shack. The home’s industrial forms and Cor10 steel siding relate to the factory below while a living roof connects the house visually to the verdant slopes beyond.

An Architect’s Perspective: The Art of Drawing Homes. Brick & Wonder is a curated platform of the highest-quality homes for sale worldwide. 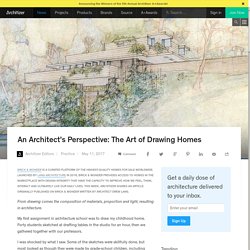 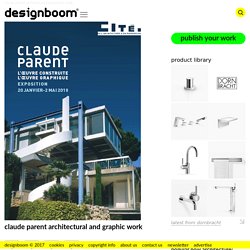 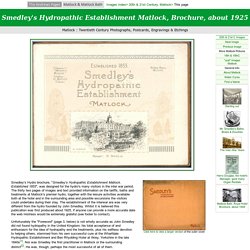 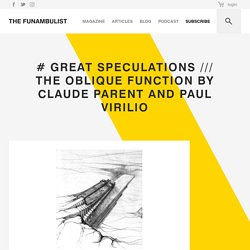 The Oblique Function was first developed in the 60’s by Architecture Principe (Claude Parent & Paul Virilio) and since then is still the main element of Parent’s architecture (see previous article). The idea was to tilt the ground in order to revolutionize the old paradigm of the vertical wall. In fact, being inclined, the wall becomes experiencable and so are the cities imagined by the two French architects. # PHILOSOPHY /// ARCHITECTURES OF JOY. A spinozist reading of Parent/Virilio and Arakawa/Gins’ architecture - THE FUNAMBULIST MAGAZINE. Site of Reversible Destiny – Yoro Park by Arakawa & Madeline Gins ARCHITECTURES OF JOY.A spinozist reading of Parent/Virilio and Arakawa/Gins’ architecture By Léopold Lambert (December 2010) In the middle of the XVIIth century, Baruch Spinoza revolutionized theology by proposing a tremendous change in the definition of God. 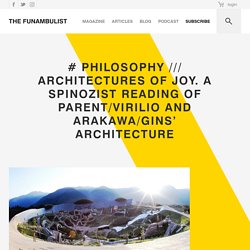 From the classic transcendental vision of a God creator, he introduced an immanent vision of God creature. Some architects might stop their reading of Spinoza’s Ethics here and consider the whole theory as an external element from their practice. Bodies, Design & Politics. It now became an habit on the Funambulist to follow one of the (too) rare fair and interesting idea competition organized by the Zagreb Society of Architects and curated by Eva Franch: Think Space. 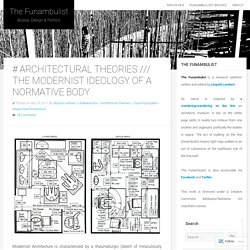 The first competition was entitled Urban Border with a topic proposed by Shohei Shigematsu and I got to publish the winners’ project Demotown designed beautifully by Jesse Honsa & Gregory Mahoney. The second competition, Geopolitical Borders (see previous article) was proposed by Teddy Cruz and the winners are now visible by following this link. Here comes the third of those competitions and the high level of interest remains as the new juror happens to be Francois Roche (R&Sie(n)). Newtonian mechanics - The best way in which a man can pull a train - Physics Stack Exchange. Short answer: There is no way that is better in absolute: 2) if a man can pull more than his own weight the best position is that in picture 2. 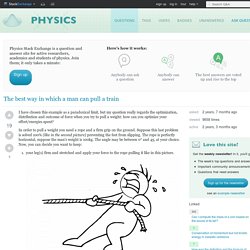 In this position one cannot exploit gravity, but almost all is pull is transmitted to the train. He is probably exerting a force of 1500N, he is not wasting energy on the ground, but we must remember that his muscles are burning calories enough to produce 6000/7500N, wasting anyway 70% of the energy The man in picture 2 knows his business or has been well-counselled: pulling with his teeth is probably a gimmick to 'hit the headlines', but maybe not only that: he is using his legs (which are much stronger than arms), is pushing at almost 0° degrees with the ground avoiding torques, is propping against a sleeper avoiding kinetic friction with the ground, is propping the cable to his teeth avoid kinetic friction with a rope.

This is certainly second best to perfection.