Find symmetry and balance in all aspects of your life by nurturing the distinct elements of mind, body, and spirit. Balance by Buddha Groove is dedicated to helping you enrich your life through a more mindful existence. Balance provides inspiration for those seeking growth and knowledge in the areas of spirituality, meditation, inner peace, self-care, and holistic wellness. For more details:-

5 Tips for Integrating the Awareness of “Emptiness” Multitasking. Healing Through the 7 States of Consciousness in Meditation. Ancient traditions teach that there are seven states of consciousness that we may more deeply explore as we begin to meditate. 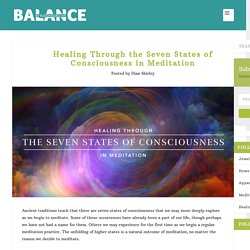 Some of these occurrences have already been a part of our life, though perhaps we have not had a name for them. Others we may experience for the first time as we begin a regular meditation practice. The unfolding of higher states is a natural outcome of meditation, no matter the reason we decide to meditate. Higher states of consciousness do not occur in a particular order, but as we evolve through them, our knowledge, our physical biology, and our reality begin to change. Meditation develops emotional resilience and creates structural changes in the neurons and neural pathways in the prefrontal cortex.

Reality is different in various states of consciousness. So, you’re probably wondering what are these seven states of consciousness are? Deep Sleep, the Dream State, and the Waking State The first three states are familiar to all of us. Glimpsing the Soul Dr. The How and Why of Fasting in Ayurveda. The practice of fasting in Ayurveda traditions is believed to confer both spiritual as well as physical benefits. 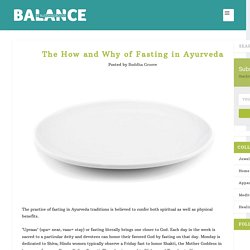 ‘Upvaas’ (upa= near, vaas= stay) or fasting literally brings one closer to God. Each day in the week is sacred to a particular deity and devotees can honor their favored God by fasting on that day. Monday is dedicated to Shiva; Hindu women typically observe a Friday fast to honor Shakti, the Mother Goddess in her many forms as Durga, Kali or Parvati. Zen Story: Perfect Silence. 5 Practices for Being "In the World But Not Of the World"

The concept of equanimity refers to the ability to be even-keeled throughout the ebbs and flows of life. 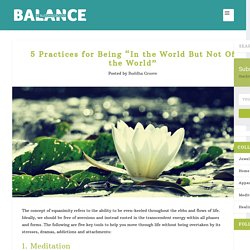 Ideally, we should be free of aversions and instead rooted in the transcendent energy within all phases and forms. The following are five key tools to help you move through life without being overtaken by its stresses, dramas, addictions and attachments: 1. True Nature: A Traditional Zen Story. An old man meditating by the riverside opened his eyes to see a scorpion flailing helplessly in the water. 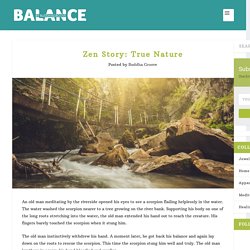 The water washed the scorpion nearer to a tree growing on the river bank. Supporting his body on one of the long roots stretching into the water, the old man extended his hand out to reach the creature. His fingers barely touched the scorpion when it stung him. The Buddhist Tour. Places connected to the life of the Buddha are sacred to Buddhists across the world. 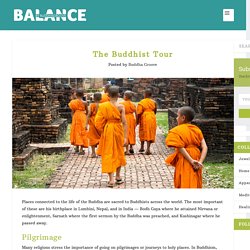 The most important of these are his birthplace in Lumbini, Nepal, and in India — Bodh Gaya where he attained Nirvana or enlightenment, Sarnath where the first sermon by the Buddha was preached, and Kushinagar where he passed away. What is Karma and What Does it Mean in Buddhism - Buddha Groove. Karma (or kamma) in Buddhism means “action”. 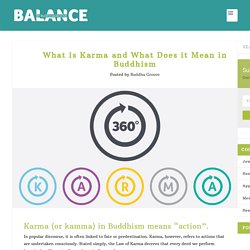 In popular discourse, it is often linked to fate or predestination. Karma, however, refers to actions that are undertaken consciously. Stated simply, the Law of Karma decrees that every deed we perform knowingly will eventually produce similar results. Knowledge – A Sufi Folktale. There once lived a scholar who had to journey across a huge river. 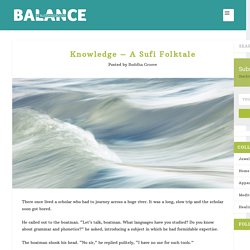 It was a long, slow trip and the scholar soon got bored. He called out to the boatman. Awakening. Awakening is about opening our eyes (literally and figuratively) to the nature of our existence. 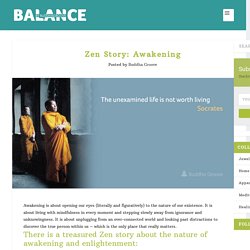 It is about living with mindfulness in every moment and stepping slowly away from ignorance and unknowingness. It is about unplugging from an over-connected world and looking past distractions to discover the true person within us – which is the only place that really matters. There is a treasured Zen story about the nature of awakening and enlightenment: The young monk traveled to a large temple on the mountain to speak to a Zen Master. The Master asked: “What do you seek?” 10 Thoughts on Human Connections and Spirituality - Balance. On our spiritual journey, friends and strangers intersect our path time and time again. 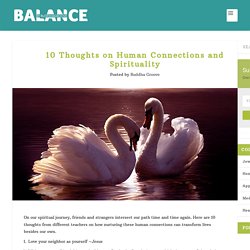 Here are 10 thoughts from different teachers on how nurturing these human connections can transform lives besides our own. Love your neighbor as yourself –Jesus With every true friendship, we build more firmly the foundations on which the peace of the whole world rests –Gandhi Be grateful for whoever comes, because each has been sent as a guide from beyond –Rumi When you see yourself in others, it is impossible to hurt anyone –Buddha Nothing but good comes to him who loves others as he loves himself –Tao Te Ching Being deeply loved by someone gives you strength, while loving someone deeply gives you courage –Lao Tzu Friendship is always a sweet responsibility, never an opportunity –Khalil Gibran There is a magnet in your heart that will attract true friends. 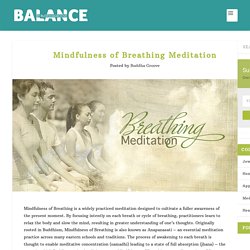 By focusing intently on each breath or cycle of breathing, practitioners learn to relax the body and slow the mind, resulting in greater understanding of one’s thoughts. Originally rooted in Buddhism, Mindfulness of Breathing is also known as Anapanasati – an essential meditation practice across many eastern schools and traditions. The process of awakening to each breath is thought to enable meditative concentration (samadhi) leading to a state of full absorption (jhana) – the stage in which Buddha attained enlightenment. Mindfulness of Breathing generally consists of four stages of breathing, which can be completed sitting, standing, or lying down, in variation with personal comfort and environmental space. It is recommended to begin with 5 minutes of practice at each stage. Life of Buddha. After setting in motion the Wheel of Dharma, the Buddha traveled to Uruvela. Here, he met the Kashyapas, a trio of ascetic brothers.

The severe austerities and esoteric rituals of their fire cult made them revered figures around Benares. The Buddha took shelter in the hut where their sacrificial fire constantly burned, despite their warning that it was haunted by a Naga (celestial, poisonous snake). True enough, the Naga appeared at night. Zen Story: First Principle. The Obaku temple in Kyoto has a carving over the gate which says “The First Principle”. The 200-year-old carving, with exceptionally large letters, is admired by many as a masterpiece of calligraphy.

It is the work of Kosen, the master carver. Kosen would sketch the letters on paper and they would be carved on wood by his workmen. The Most Inspiring Lao Tzu Quotes. Developing a New Perspective When Seeing All as the Oneness - Balance. Praying For the Enlightenment of Others. Enlightenment in Buddhism refers to a state of consciousness that is free of suffering and delusion. It’s a timeless state that reflects the true nature of our eternal souls. Between incarnated lifetimes, our soul-consciousness returns to the pure, formless potential and infinite Source of Unconditional Love from which we came; however, Enlightenment allows us a connection with this dynamic, high-vibration state even while on earth. Enlightened humans have mastery of the mind and are not ruled by thoughts, emotions, desire, aversion, fear or ego. Their brains and nervous systems function differently, and they are in touch with a profound peace that is at once deeply serene and incredibly powerful.

Something about them seems to exist outside of space and time. The Bodhisattva Vow In Buddhism, a Bodhisattva refers to someone who is committed to the Enlightenment of all beings. As such, deep compassion is at the heart of Buddhist teachings as well as the Bodhisattva Vow. Zen Story: Wishful thinking. Meditation Basics from A to Z. Meditation is a practice that restores our health, energy and overall sense of wellness. It has been shown to improve our emotional connections with those around us and it has also been shown to stimulate the frontal cortex of the brain- the area most associated with our happiness and productivity. Here is a look at the elements of meditation from A-Z, including health benefits, important themes, and powerful words you can use as mantras: Acceptance. Inspiration & Wisdom – BuddhaGroove.

Who is Pema Chödrön? Long before she became a Buddhist nun, a world-recognized meditation teacher or a best-selling spiritual author, Pema Chödrön was simply Deirdre Blomfield-Brown. Born on July 14, 1936 in New York City, Pema’s earliest experiences indicated an ordinary life of family, school and traditional career paths. She attended Miss Porter’s School in Farmington, Connecticut, grew up on a countryside farm with an older brother and sister, and graduated from University of California, Berkeley.

She taught elementary school in California and New Mexico and married twice (having two children), all before her spectacular spiritual journey. Then, in her mid-thirties and recovering from a second divorce, Pema journeyed to the French Alps and encountered Lama Chime Rinpoche, who became her spiritual teacher and inspiration to become an ordained Buddhist nun. Inspirational Quotes to Aid Your Personal Journey - Balance. In his acclaimed poem, Song of Myself, Walt Whitman writes, “I tramp a perpetual journey.” But Whitman is not alone.

6 Ways the Labyrinth Can Enhance Your Meditation Practice - Balance. 6 Ways Taoism Can Complement Any Spiritual Practice - Balance. Many spiritual traditions have a specific set of principles or in some cases dogmas that must be adhered to. Like Buddhism has specific precepts such as the four noble truths and the eight-fold path. However, Taoism is known for its near lack of structure or dogma. Because of this, it can complement and enhance just about any other belief system without conflicting with it. Root Chakra - Get Grounded. It is often said that in order to experience growth, we must first be grounded in a strong foundation. The Four Noble Truths in Buddhism – Buddha Groove. Seven Buddhist Mantras to Try In Your Practice- Balance. The Buddhist Metta (Lovingkindness) Prayer - Balance. The Buddhist Metta (Lovingkindness) Prayer is simple but profound. It starts by blessing oneself and gradually expands outward from there, eventually wishing good intentions for the entire world and all beings, even our enemies.

There are many variations and translations of this prayer, but what follows is the essence of it; if we all said this prayer with sincerity at least once per week, the world could be a very different place: My heart fills with with loving kindness. I love myself. May I be happy. May I be well. Meaningful Symbols - A Guide to Sacred Imagery - Balance. In Tibetan Buddhism, these symbols are said to be the luckiest and most sacred of all. Frequently seen in combination with one another, each represents a different component of Buddhist philosophy.

Meditation Basics for Beginners. How Do Props Help With Prayer, Intention and Meditation? - Balance. Moonstone: Hope, Balance, and Feminine Energy - Balance. Traditionally known as the Traveler’s Stone, Moonstone was cherished by the ancient Romans and is considered sacred in India. Eastern mythology says that the stone was formed out of solidified moonbeams. 10 Beautiful Reasons to Meditate. Zen Poetry: 7 Cups of Tea. 4 Yoga Poses for Grounding – Natural Wellness and Yoga Lifestyle. Aquamarine: A Healing Gemstone For Calm and Courage. Healing Essential Oils For Meditation and Inner Peace. How Yoga Makes You Happy. Why You Should Practice Yoga Nidra. Heart Chakra - Embrace Love. Throat Chakra - Live Your Truth. Third Eye Chakra - Find Clarity. Crown Chakra - Seek Wisdom. A Guide to Healing Gemstones. How to Eat to Optimize Health and Digestion: Tips from Ayurvedic Wisdom.