Arcimboldo's Feast for the Eyes. The job of a renaissance court portraitist was to produce likenesses of his sovereigns to display at the palace and give to foreign dignitaries or prospective brides. 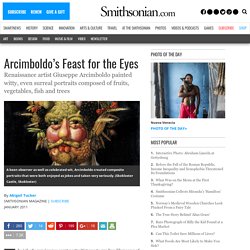 It went without saying the portraits should be flattering. Yet, in 1590, Giuseppe Arcimboldo painted his royal patron, the Holy Roman Emperor Rudolf II, as a heap of fruits and vegetables (opposite). With pea pod eyelids and a gourd for a forehead, he looks less like a king than a crudité platter. Lucky for Arcimboldo, Rudolf had a sense of humor. And he had probably grown accustomed to the artist’s visual wit. Though his work was forgotten for centuries, Arcimboldo is enjoying a personal renaissance, with shows at major European museums. “We wanted people to have the experience that the emperors in the Hapsburg court had,” says David Alan Brown, a National Gallery curator. The show is also a chance to get inside Arcimboldo’s own head, itself a composite of sorts.

Abigail Tucker is the magazine’s staff writer. Learn How to Draw Manga & Portrait. Your teacher is Graeme Biddle. He has over 30 years experience you’ll Learn How To Draw Caricatures Success in 7 Days Learn How to Draw Caricatures Full Course What’s Included In the Package. Annie Leibovitz Shoots the Pirelli Calendar Into a New Direction. Chuck Close. 'Self Portrait', (2004-05) oil on canvas (102"x86") Chuck Close is a modern American artist who has achieved international recognition for his large scale portraits. 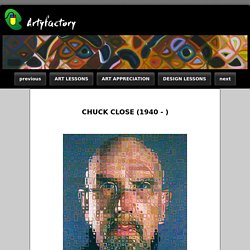 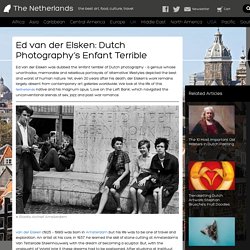 An artist at his core, in 1937, he learned the skill of stone cutting at Amsterdam's Van Tetterode Steenhouwerij, with the dream of becoming a sculptor. But, with the onslaught of World War II, these dreams had to be postponed. After studying at Instituut voor Kunstnijverheidsonderwijs, in 1944 der Elsken enrolled in the professional sculpture programme, which he was forced to abandon to escape Nazi forced labour.

In 1947, following the end of the war, he found work in photo sales and attempted a correspondence course with the Fotovakschool in Den Haag, after developing an interest in photography that would soon take over his life – he failed the final examination. However, following this disappointment, der Elsken gained membership of the GKf (the photographer's section of the Dutch federation of practitioners of the applied arts). Unit 5: Color Theory & Portraits. Elizabeth Peyton at Regen Projects. For some Elizabeth Peyton is an acquired taste. 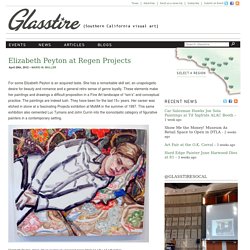 She has a remarkable skill set, an unapologetic desire for beauty and romance and a general retro sense of genre loyalty. These elements make her paintings and drawings a difficult proposition in a Fine Art landscape of “ism’s” and conceptual practice. The paintings are indeed lush. They have been for the last 15+ years. Her career was etched in stone at a fascinating Projects exhibition at MoMA in the summer of 1997. Elizabeth Peyton, Klara, Oil on aluminum veneered panel 2012 14 1/8 x 17 1/8 inches Peyton fans are sometimes sheepish, admitting to their admiration as a guilty pleasure.

Elizabeth Peyton, Alex (Alex Katz) Winter 2012 Oil on aluminum veneered panel 2012 15 x 12 inches Peyton’s primary genre is portraiture and the Regen exhibition concentrates solely on that. The greatest example between this disparate attention between face and figure is a portrait of painter Alex Katz. Elizabeth Peyton, What Wondrous Thing Do I See... Art Lessons: Chuck Close Grid Drawings. Home. Be sure to visit the page “What’s New” to catch all that is happening! 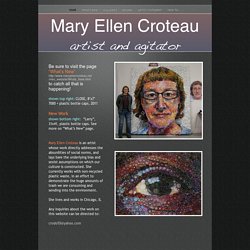 Shown top right: CLOSE, 8’x7’ 7000 + plastic bottle caps, 2011 New Work shown bottom right: “Larry”, 31x41, plastic bottle caps. Mary Ellen Croteau is an artist whose work directly addresses the absurdities of social norms, and lays bare the underlying bias and sexist assumptions on which our culture is constructed. She lives and works in Chicago, IL Any inquiries about the work on this website can be directed to: crodo55@yahoo.com. Photographer Bill Gekas Shoots Portraits of his Daughter in the Style of Classic Paintings. GG: portraits: still-life portraits: gretchen garner (self portrait) - Gretchen Garner (self portrait) - Between 1983 and 1990 I was actively working on issues of portraiture. 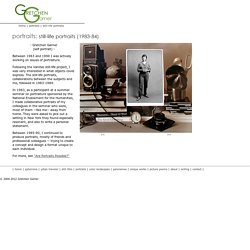 Following the Vanitas still-life project, I was very interested in what objects could express. The still-life portraits, collaborations between the subjects and me, followed in 1983-1984. In 1983, as a participant at a summer seminar on portraiture sponsored by the National Endowment for the Humanities, I made collaborative portraits of my colleagues in the seminar who were, most of them --like me-- away from home. They were asked to pick out a setting in New York they found especially resonant, and also to write a personal statement. Between 1985-90, I continued to produce portraits, mostly of friends and professional colleagues -- trying to create a concept and design a format unique to each individual. For more, see "Are Portraits Possible? 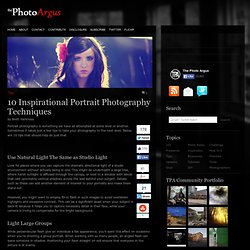 Sometimes it takes just a few tips to take your photography to the next level. Below are 10 tips that should help do just that. Use Natural Light The Same as Studio Light. How To Photograph Portraits - Photo Continental. Creative photography - portrait tutorial. Environmental Portraits. How to Take a Great Portrait. Portrait Photography Tips by Bambi Cantrell. How to Take Great Portrait Photos. Seeing the Light - Photography Tutorial. Rembrandt style artistic portrait photography - light and colour photoshop tips. Photographer of the Year 2012 - Round 1: Portraits results.