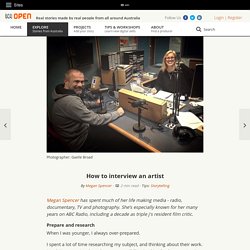 She’s especially known for her many years on ABC Radio, including a decade as triple j's resident film critic. Prepare and research When I was younger, I always over-prepared. I spent a lot of time researching my subject, and thinking about their work. I took it very seriously and as a responsibility. As part of your research, Put yourself in the mind of that person.Reflect on their environment and the landscape they work inWhat is unique about their life, their art, their process and the way they want people to interact with it? Preparing well means you can ‘play’ and have fun in the interview - which is important too! People skills Be polite.

The flow of an interview Even an interview has a 'start, middle and end.' Less is more. Trust and interest Interest is key. Questions. A Neighbor's Empathy Makes The Pain Of Grief Bearable. My husband died. 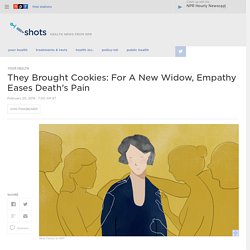 He wasn't young any more and was sick and weak but we weren't expecting his death to come as quickly as it did, within a few days, almost overnight. He just went away. Maybe there are worse things than a quick, quiet death. Here's what happened next. My brother and sister-in-law (who live a couple of hours away) called: We'll be there tonight, and we're staying until you make us leave. Body Language: Mirroring. Cognition and behavior: Study defends mirror neuron theory of autism — Simon says: A controversial theory suggests that mirror neurons, which are activated when we mimic others, are deficient in autism. 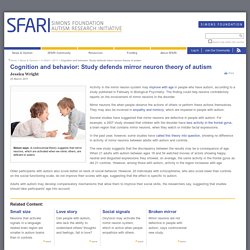 Activity in the mirror neuron system may improve with age in people who have autism, according to a study published in February in Biological Psychiatry. The finding could help resolve contradictory reports on the involvement of mirror neurons in the disorder. Mirror neurons fire when people observe the actions of others or perform these actions themselves.

They may also be involved in empathy and mimicry, which are impaired in people with autism. Several studies have suggested that mirror neurons are defective in people with autism. In the past year, however, some studies have called this theory into question, showing no difference in activity of mirror neurons between adults with autism and controls. The new study suggests that the discrepancy between the results may be a consequence of age. Coca-Cola Social Media Guard. Thought Bubble: Amy Krouse Rosenthal. Free learning styles inventory (test, quiz or questionnaire) Learning is Fun. Schools should be fun. 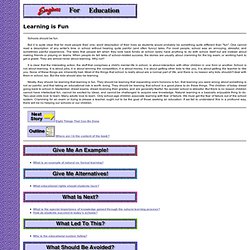 But it is quite clear that for most people their one- word description of their lives as students would probably be something quite different than "fun". One cannot read a description of any writer's time in school without hearing quite painful (and often funny) tales. For most people, school was an annoying, stressful, and sometimes painful experience. The tales that people tell when they look back fondly at school rarely have anything to do with school itself but are instead about making friends or playing on teams. When people do tell tales of school-related success, the stories are usually about cramming for the big exam, or working hard to get a grade. It is clear that the interesting action, the stuff that comprises a child's mental life in school, is about interaction with other children in one form or another. Mostly, they should be learning that learning is fun.

Eight Things That Can Be Done Where am I in the content of the book? Learning Styles Online.com - including a free inventory. 10 Amazing Illusions. World's Quickest Personality Test. How Predictable Are You? THE TEST. Top 50 Brain Teasers and Games. Kseniya Simonova - Sand Animation (Україна має талант / Ukraine's Got Talent) Bubbl.us - Web 2.0 Tools. Address: Ideas (from TeachWeb2.Wikispaces): Brainstorm, Create timeline for group project management, Can be used as a pre- and post- topic assessment tool; create mindmap showing what students know before the lesson and one showing what they have learned, Mind map a book chapter or entire book instead of outlining in the traditional sense, Vocabulary lesson can be used with this, Create word webs to share with classmates who may have related words, Introduce note-taking strategies to analyze literature, Solve equations by different methods, Flow-chart style mapping of problem solving strategies, Science Processes such as Precipitation Cycle can be illustrated, Make a family tree when studying family heritage, Timeline for a specific historical period or event Getting Started Tutorial Videos. 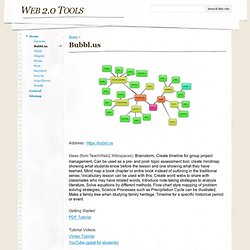 Google Image Result for. Relay team celebrate gold. How To Never Lose in Tic Tac Toe When You Start. Smarties 8 Colours of Fun. Nestlé Australia is promoting Smarties chocolates in an integrated advertising campaign, “The 8 Colours of Fun”, aimed at children and their parents. 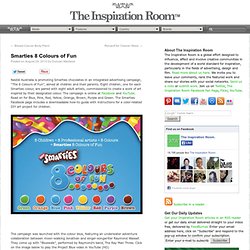 Eight children, one for each Smarties colour, are paired with eight adult artists, commissioned to create a work of art inspired by their designated colour. The campaign is online at Facebook and YouTube. Wallace & Gromit's World of Cracking Ideas - Home.