Muhammara. There are few things as wonderful as Israeli breakfast. 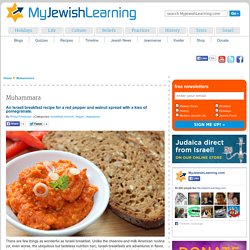 Stuffed Grape Leaves. To make the filling, warm the olive oil in a sautee pan over medium heat. 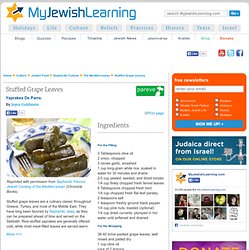 Add the onions and sautee until tender and translucent, about 10 minutes. Add the garlic and sautee for a few minutes longer. Add the drained rice to the sautee pan along with all of the remaining ingredients. Stir well and remove from the heat. Shavuot Foods. Recipes for the Holiday On Shavuot it is customary to eat dairy foods. 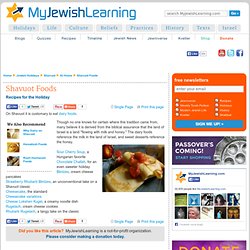 Though no one knows for certain where this tradition came from, many believe it is derived from the biblical assurance that the land of Israel is a land "flowing with milk and honey. " 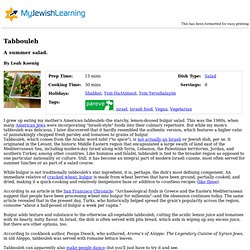 By Leah Koenig I grew up eating my mother's American tabbouleh--the starchy, lemon-doused bulgur salad. This was the 1980s, when many American Jews were incorporating "Israeli-style" foods into their culinary repertoire. But while my mom's tabbouleh was delicious, I later discovered that it hardly resembled the authentic version, which features a higher ratio of painstakingly chopped fresh parsley and tomatoes to grains of bulgur. 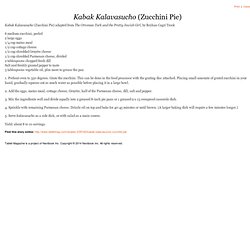 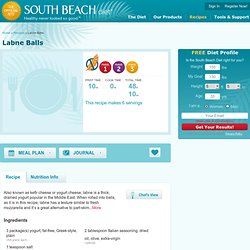 Shakshuka. Shakshuka means "all mixed up! 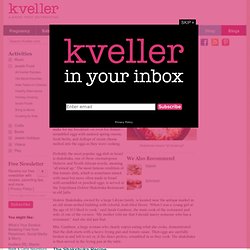 " We Also Recommend In 1930, Simon Agranat, the chief justice of the Israeli Supreme Court, wrote to his aunt and uncle in Chicago: "I had my eighth successive egg meal during my three-day jour­ney through the Emek (the valley). " Eggs have always been a main protein for people in Israel. Lentil Burgers. In shape and stature, the lentil is rather unremarkable - a small, pebble-like legume dressed in muted earth tones. 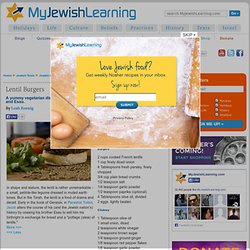 But in the Torah, the lentil is a food of drama and deceit. Early in the book of Genesis, in alters the course of his (and the Jewish nation's) history by coaxing his brother Esau to sell him his birthright in exchange for bread and a "pottage (stew) of lentils. " Plov (Pilaf) I've been curious about plov (based on the original Persian word pulaw), the signature Uzbeki rice and meat dish, ever since I tasted it a few years back at Ta'am Tov, a kosher Bukharian restaurant in New York's Diamond District. 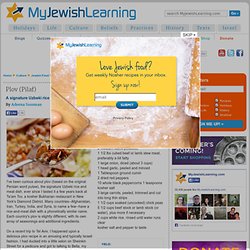 Many countries--Afghanistan, Iran, Turkey, India, and Syria, to name a few--have a rice-and-meat dish with a phonetically similar name. Each country's plov is slightly different, with its own array of seasonings and additional ingredients. On a recent trip to Tel Aviv, I happened upon a delicious plov recipe in an amusing and typically Israeli fashion. I had ducked into a little salon on Sheinkin Street for a pedicure and got to talking to Bella, my aesthetician.

It turned out she was an Uzbeki immigrant who had run an Uzbeki restaurant in Tel Aviv. Tanti Mati’s Haroset. Hummus. Some kids adore this creamy Israeli spread. 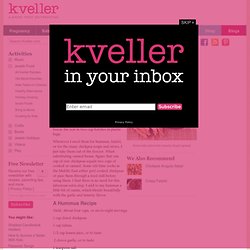 I have been making hummus for years and have concluded that despite the temptation to use canned chickpeas, the flavor is much better when it is made with dried chickpeas found at Middle Eastern or Indian food stores. First I soak a large quantity overnight, cook some, and then drain and freeze the rest in two-cup batches in plastic bags. Whenever I need them for hummus, falafel, or for the many chickpea soups and stews, I just take them out of the freezer. When substituting canned beans, figure that one cup of raw chickpeas equals two cups of cooked or canned. Some old-time cooks in the Middle East either peel cooked chickpeas or pass them through a food mill before using them. Yield: About four cups, or six-to-eight servings 1 cup dried chickpeas 1 cup tahina. Tuscan Spinach Soup. To make the meatballs: Place the chopped meat in a large mixing bowl.

Add the egg, matzah meal, oregano, salt, and pepper. Mix gently with your hands until just homogenous; try not to work the meat too much or the meatballs might end up hard. Once the meat is mixed, roll donut-hole sized meatballs, and set on a plate. Heat 2 tablespoons of oil in a pan and brown the meatballs on all sides. Add them to the boiling soup pot as described below. Yerushalmi Kugel. We Also Recommend Preheat oven to 350F. Cook noodles according to package directions; rinse and drain well. In a heavy skillet, combine oil and sugar over medium heat. Cook, stirring constantly, until sugar is very dark but not burnt, about 11-12 minutes.

Remove from heat. In a large bowl, quickly combine drained noodles and caramelized sugar. Polenta. Combine the polenta, one teaspoon salt, and water in a heavy-bottomed saucepan and place over medium heat. Bring to a gentle boil, whisking occasionally.