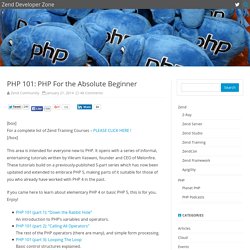 [/box] This area is intended for everyone new to PHP. It opens with a series of informal, entertaining tutorials written by Vikram Vaswani, founder and CEO of Melonfire. These tutorials build on a previously-published 5-part series which has now been updated and extended to embrace PHP 5, making parts of it suitable for those of you who already have worked with PHP 4 in the past. Atebits. App. Dev. Corona: The fastest and easiest way to create cross-platform mobile apps. Planning for Mobile App Development? eLuminous Tech sur Twitter : "Here're some interesting #facts that show why is it high time to #investing in #MobileApps : Invest in Mobile Apps Development. eLuminous Tech sur Twitter : "7 consequences of not #investing in #mobileapps #development . #webdesign #android #iosdev. Build your own Flappy Bird with SpriteBuilder and Cocos2d 3.0. Only 2 Weeks left! 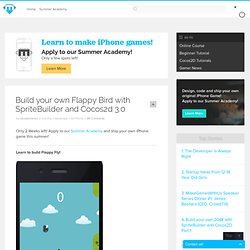 Apply to our Summer Academy and ship your own iPhone game this summer! Learn to build Flappy Fly! This is the one and only tutorial that will teach you how to implement a native Flappy Bird clone for iOS. We will be using SpriteBuilder and Cocos2d 3.0 and walk you through all the steps starting with a blank project. How To Make a Custom Control. Learn how to make a custom control like a slider that has two knobs Update 8/27/14: Post now updated to iOS 8 and Swift, check it out! 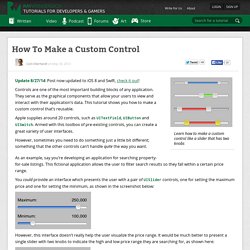 Controls are one of the most important building blocks of any application. They serve as the graphical components that allow your users to view and interact with their application’s data. This tutorial shows you how to make a custom control that’s reusable. Apple supplies around 20 controls, such as UITextField, UIButton and UISwitch. iOS. Iphone. Learn iOS design and Xcode.

The most efficient design tool just got better Design isn't hard to learn. 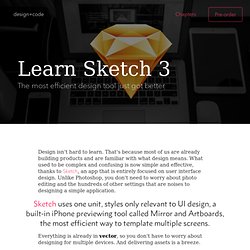 That's because most of us are already building products and are familiar with what design means. What used to be complex and confusing is now simple and effective, thanks to Sketch, an app that is entirely focused on user interface design. Unlike Photoshop, you don't need to worry about photo editing and the hundreds of other settings that are noises to designing a simple application. NSHipster. How To Choose the Best Backend Provider for your iOS App: Parse vs Stackmob. StackMob vs Parse vs Appcelerator Cloud: The fight of the iOS back-end century! 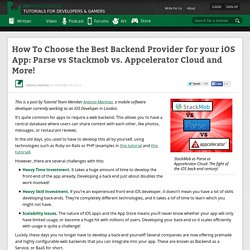 This is a post by Tutorial Team Member Antonio Martínez, a mobile software developer currently working as an iOS Developer in London. It’s quite common for apps to require a web backend. This allows you to have a central database where users can share content with each other, like photos, messages, or restaurant reviews. Resources. IOS App Development. 30 Beautiful iOS App Website Designs for Inspiration. An iOS mobile app often has a website associated with it. 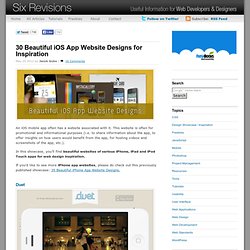 This website is often for promotional and informational purposes (i.e. to share information about the app, to offer insights on how users would benefit from the app, for hosting videos and screenshots of the app, etc.). In this showcase, you’ll find beautiful websites of various iPhone, iPad and iPod Touch apps for web design inspiration. If you’d like to see more iPhone app websites, please do check out this previously published showcase: 35 Beautiful iPhone App Website Designs. Duet. This post is also available in: Chinese (Simplified), Italian, Russian, Korean Note from Ray: This is an abbreviated version of a chapter from iOS 7 by Tutorials that we are releasing as part of the iOS 7 Feast. 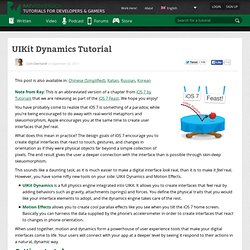 We hope you enjoy! You have probably come to realize that iOS 7 is something of a paradox; while you’re being encouraged to do away with real-world metaphors and skeuomorphism, Apple encourages you at the same time to create user interfaces that feel real. What does this mean in practice? The design goals of iOS 7 encourage you to create digital interfaces that react to touch, gestures, and changes in orientation as if they were physical objects far beyond a simple collection of pixels. How to Build an App Empire: Can You Create The Next Instagram? No Comments. Chad Mureta runs his seven-figure app business from his iPhone. 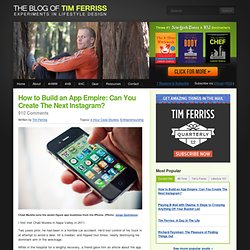 (Photo: Jorge Quinteros). I first met Chad Mureta in Napa Valley in 2011. Coding i apple apps. Learn iOS design and Xcode. How To Create A Simple 2D iPhone Game with OpenGL ES 2.0 and GLKit Part 1. This is a blog post by site administrator Ray Wenderlich, an independent software developer and gamer. 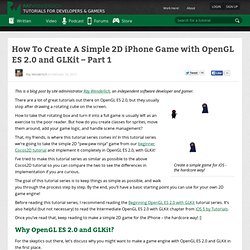 Create a simple game for iOS - the hardcore way! There are a lot of great tutorials out there on OpenGL ES 2.0, but they usually stop after drawing a rotating cube on the screen. How to take that rotating box and turn it into a full game is usually left as an exercise to the poor reader. But how do you create classes for sprites, move them around, add your game logic, and handle scene management? That, my friends, is where this tutorial series comes in! Advertisement Mobile users and mobile usage are growing. 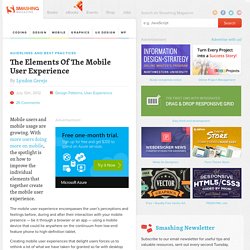 With more users doing more on mobile1, the spotlight is on how to improve the individual elements that together create the mobile user experience. iOS Top Charts United States - Overall - Apr 04, Origami - Design prototyping with Quartz Composer. The Art Of Launching An App: A Case Study. Advertisement You’ve made your first app! Now what? Anyone in the app business knows that marketing an app is tough. And according to a recent article on TechCrunch1, “Getting a mobile app noticed in the increasingly crowded mobile app market is more difficult than ever.”