Moby-Dick Chapter 42: The Whiteness of the Whale Summary. Ishmael explains what Moby Dick means to him (in contrast to what the whale means to Captain Ahab). 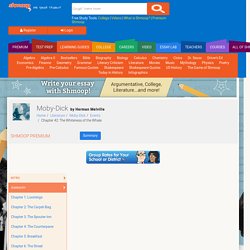 What really bothers Ishmael about the whale is its whiteness.In a sentence-turned-paragraph, Ishmael describes all the natural and unnatural contexts in which whiteness is considered good or superior, including everything from pearls to white supremacy to priests’ white robes.Despite all these things, however, Ishmael claims that the fundamental idea of whiteness "strikes more of panic to the soul than that redness which affrights in blood" (42.3).As a result, Ishmael claims, anything that is already terrible seems even more horrifying when it has a ghostly, eerie whiteness to it, like a white shark or a polar bear. (Apparently, Ishmael suffers from polarbearophobia.)And then there’s the albatross: aren’t those creepy? People who Shmooped this also Shmooped... Book Summary. "Call me Ishmael," the narrator begins, in one of the most recognizable opening lines in American literature. 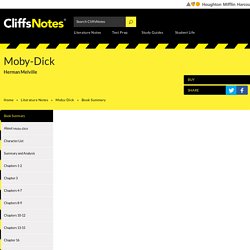 This observant young man from Manhattan has been to sea four times in the merchant service but yearns for a whaling adventure. On a cold, gloomy night in December, he arrives at the Spouter-Inn in New Bedford, Massachusetts, and agrees to share a bed with a stranger. Both men are alarmed when the bunkmate, a heavily tattooed Polynesian harpooner named Queequeg, returns late and discovers Ishmael beneath his covers.

But the two soon become good friends and decide to sail together from the historical port of Nantucket. In Nantucket, they sign on with the Pequod, Queequeg the more attractive employee due to his excellence with the harpoon. The ship's officers direct the early voyage. The mystery of the dark figures is explained during the voyage's first chase, long before meeting Moby Dick. Queequeg becomes deathly ill and orders a canoe-shaped coffin from the ship's carpenter. Blank 13. Moby-Dick: Background Info.

Author Bio Full Name: Herman Melville Date of Birth: August 1, 1819 Place of Birth: New York City Date of Death: September 28, 1891 Brief Life Story: Herman Melville’s writings have granted him worldwide renown since his death, at the end of the 19th century, but he was read only fitfully by the American public during his lifetime, and his greatest literary achievements were received with a mixture of puzzlement and disregard. 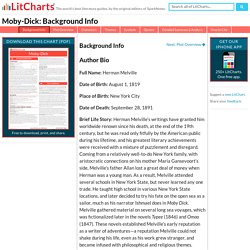 Key Facts Full Title: Moby Dick; or, The Whale Genre: Novel of the sea; whaling novel; episodic novel; novel of ideas; precursor to the modernist novel Setting: Primarily on the Pequod, a whaling vessel, throughout the Indian and Pacific Oceans, in the late 1840s Climax: On the third day of the chase, Moby Dick causes Ahab to kill himself, by snagging himself in his own harpoon-line; Moby Dick then smashes into the Pequod, drowning all aboard except Ishmael, who lives to report the story of the whale.

Antagonist: Moby Dick, the White Whale Historical and Literary Context. Every Page of Moby-Dick, Illustrated. By Maria Popova Illustrated insights on love, hate, God, capitalism, and the rest of life via Herman Melville and found paper. 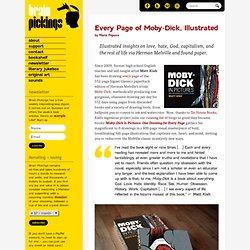 Since 2009, former high school English teacher and self-taught artist Matt Kish has been drawing every page of the 552-page Signet Classics paperback edition of Herman Melville’s iconic Moby-Dick, methodically producing one gorgeous, obsessive drawing per day for 552 days using pages from discarded books and a variety of drawing tools, from ballpoint pen to crayon to ink and watercolor.

Now, thanks to Tin House Books, Kish’s ingenious project joins our running list of blogs so good they became books: Moby-Dick in Pictures: One Drawing for Every Page gathers his magnificent lo-fi drawings in a 600-page visual masterpiece of bold, breathtaking full-page illustrations that captivate eye, heart, and mind, inviting you to rediscover the Melville classic in entirely new ways.