63 Vinyl Artists You Should Know. Starting a new hobby can be difficult, and Collect3d gets that. 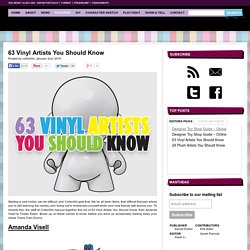 We’ve all been there, that difficult first part where you’re still learning the names, and trying not to embarrass yourself while your new friends talk around you. To remedy this, the staff at Collect3d has put together this list of 63 Vinyl Artists You Should Know, from Amanda Visell to Tristan Eaton. Brush up on these names to know, before you wind up accidentally trading away your chase Travis Cain Dunny. Designer toy. Overview[edit] Another example of designer toys is the Dunny series, produced by the American company Kidrobot. 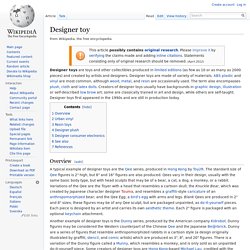 Dunny figures may be considered the Western counterpart of the Chinese Qee and the Japanese Be@rbrick. Dunny are a series of figures that resemble anthropomorphized rabbits in a cartoon style (a design originally illustrated by graffiti, stencil, and comic artists) which are produced as 3", 8", and 20" figures. There is a variation of the Dunny figure called a Munny, which resembles a monkey, and is only sold as an unpainted do-it-yourself piece. Most vinyl toys are produced in factories in China, though some designers have shifted production to Japan where higher quality materials such as clear vinyl are used.

URBAN VINYL ICON KIDROBOT JOINS NECA FAMILY OF COMPANIES. Will Again Be Run as an Artist-Driven Company Under the Creative Direction of Frank Kozik Hillside, NJ – November 19, 2014 – In an announcement sure to bring cheers and tears of joy to die-hard fans and artists, KR Purchase, LLC (a wholly owned subsidiary of National Entertainment Collectibles Association) and Kidrobot today announced the signing of a definitive agreement under which KR Purchase will acquire Kidrobot. 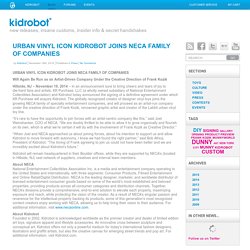 The globally recognized creator of designer vinyl toys joins the growing NECA family of specialty entertainment companies, and will proceed as an artist-run company under the creative direction of Frank Kozik, renowned graphic artist and creator of the Labbit urban vinyl toy line. “It’s rare to have the opportunity to join forces with an artist-centric company like this,” said Joel Weinshanker, COO of NECA.

Seven Reasons to Collect Urban Vinyl Action Figures. Collecting urban vinyl action figures is a hot, relatively new hobby that started in the East and has made its way to the West. 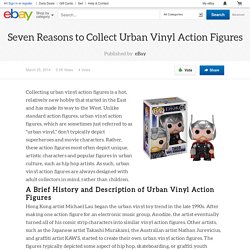 A brand new Star Wars action figure still unopened and in its box will not be expensive. 4. Art comes in many forms. TIAToyInventorDesignerGuide.pdf. GAcollege411 - Career Profile. Toy designers have one of the most important jobs in the world: making children happy. 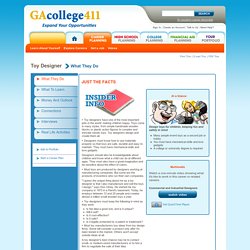 Toys come in many styles, from simple handmade wooden blocks or plastic action figures to complex and intricate robotic toys. Toy designers design and create them all. Designers must know how to use materials properly so that toys are safe, durable and easy to maintain. They must have mechanical skills and love gadgets.

Designers should also be knowledgeable about children and know what a child can do at different ages. Most toys are produced by designers working at manufacturing companies. "I guess the unique thing about me as a toy designer is that I also manufacture and sell the toys I design," says Don Olney. Toy designers must keep the following in mind as they work: Is the idea a good one, and is it unique? Most toy manufacturers buy ideas from toy design firms. A toy designer's best chance may be to contact small- or medium-sized manufacturers or to hire a firm to negotiate the sale of their idea. 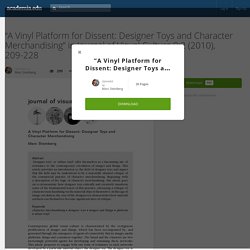 Designer toys began as, and continue to be, a eld of experimentation into character production and design, a new medium for stagingencounters between character merchandising and art. In some ways, this new artistic medium reproduces old modalities, encouraging the consumer to becomecollector. Nonetheless, the eld also suggests an opening whereby the very terms‘artist’, ‘commerce’ and ‘consumer’ are transformed. Or things may function as nodes through which totransform the proliferating networks of images, things and the agents that bindthem within late capitalist consumption. Character Merchandising: Principles of the Practice Connectivity is one of the rst principles of character merchandising. 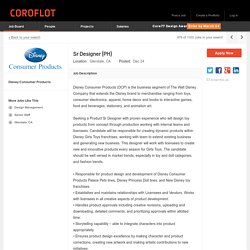 Seeking a Product Sr Designer with proven experience who will design toy products from concept through production working with internal teams and licensees. Candidate will be responsible for creating dynamic products within Disney Girls Toys franchises, working with team to extend existing business and generating new business. This designer will work with licensees to create new and innovative products every season for Girls Toys.