Log In - New York Times. You Can Thank Genetic Engineering For Your Delicious Cheese. Medieval Cheese Forum. The Adventures of Anne Hastings in the World of Cheese. I may be biased, but I have to hold my hands up and say that I think that the Crème Fraiche from Neal’s Yard Creamery is the best I have ever tasted. 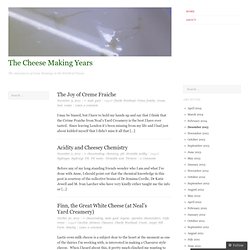 Since leaving London it’s been missing from my life and I had just about kidded myself that I didn’t miss it all that […] Before any of my long standing friends wonder who I am and what I’ve done with Anne, I should point out that the chemical knowledge in this post is courtesy of the collective brains of Dr Jemima Cordle, Dr Katie Jewell and M.

Ivan Larcher who have very kindly either taught me the info or […] Lactic cows milk cheese is a subject dear to the heart at the moment as one of the dairies I’m working with, is interested in making a Chaource style cheese. When I heard about this, it pretty much clinched me wanting to work with them as, independently, I had been thinking of making Chaource myself […] Before I got embroiled in the vegan debate, I was recounting a visit to Neal’s Yard Creamery. Handyface. I’ve been getting a fair few emails recently asking whether I’m still making cheese, and the answer is YES! 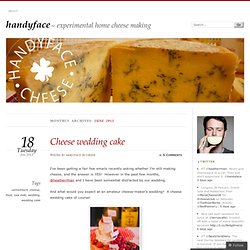 However in the past few months, @heatherrhian and I have been somewhat distracted by our wedding. And what would you expect at an amateur cheese-maker’s wedding? A cheese wedding cake of course! Cheese wedding cake After much deliberation I decided not to risk making the cheese cake myself, mainly because the work required would’ve been way too much, and I would’ve stressed myself out completely if anything went wrong! Instead, I went to the fantastic Neal’s Yard Dairy and with the help of Katy Fenwick decided on the following assortment, from top to bottom: Stawley – an unpasterised goat milk cheese, made by Caroline and Will Atkinson.

Cutting the cheese cake Cutting the cake was brilliant – we went through the Feallan with ease, then got completely stuck on the Spenwood. Trying to cut through Spenwood We eventually managed to get through it, fingers all intact. How To Cultivate Your Own Blue Mold. Are you a blue cheese fan? 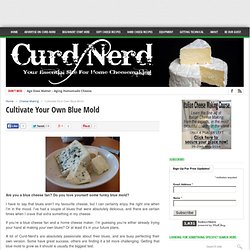 Do you love yourself some funky blue mold? I have to say that blues aren’t my favourite cheese, but I can certainly enjoy the right one when I’m in the mood. I’ve had a couple of blues that were absolutely delicious, and there are certain times when I crave that extra something in my cheese. David Asher Rotsztain. Big Cheese Stories. Cheese Underground. Cheese Travels with Jim Wallace. The Cheese Chap. Farming, Fromage, and Philosophy. Artisanal Cheeses. July 8th, 2013, by Jennifer Cool, via blog.castac.org From Marcia Inhorn, Chair, 2013 Forsythe Prize Committee The Society for the Anthropology of Work (SAW) and the Committee on the Anthropology of […] Read Article → By Kristin Fritz, June 25th 2013, Via Everydayebook.com There are people who like cheese. 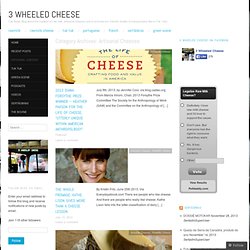 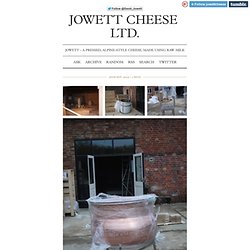 A stainless steel tank to transport the milk from the farm to the dairy; a round copper cauldron which the milk will be transfered to, heated, coagulated, cut into curds and whey, and then stirred and cooked; a draining table on which the curd will be moulded after being scooped out of the cauldron; a hydraulic press where the curd will be pressed in their moulds over night; an enormous cheese harp (which is far too big really), and all sorts of other bits and pieces - paddles, pumps, aprons, gloves, cultures, buckets, hoses, and stainless steel pipes, valves and fiddly bits to attach pipes and hoses together. The cheese harp - a stainless steel frame with 20 taught, vertical wires, is enormous, perhaps it will be fine, but the handle at least seems too long and a bit clumbersome. I haven’t counted them yet, but it looks like I’ve got literally hundreds of disposable shoe covers, maybe thousands even!