Why did I chose volleyball? Equipment and History. Beach volleyball started out in California as a pastime. 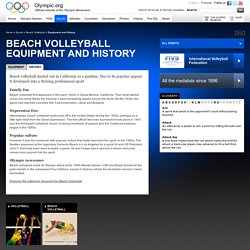 Due to its popular appeal it developed into a thriving professional sport Family fun Beach volleyball first appeared in the early 1920s in Santa Monica, California. Then what started out as just some family fun became a sport spreading rapidly across the world. By the 1930s, the game had reached countries like Czechoslovakia, Latvia and Bulgaria. Depression free. 15 Interesting Facts About Volleyball.

A unique team sport with a short history, volleyball is one of the few team sports that was invented in the United State s; today volleyball is a favorite among many and is played all over the globe. 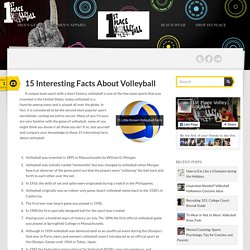 In fact, it is considered to be the second most popular sport worldwide, coming second to soccer. Many of you I’m sure are very familiar with the game of volleyball, some of you might think you know it all-think you do? If so, test yourself and compare your knowledge to these 15 interesting facts about volleyball. A Simple Guide To Volleyball - Rules. The rules of volleyball are simple, but they’re constantly changing, and they can differ depending on the level of competition. 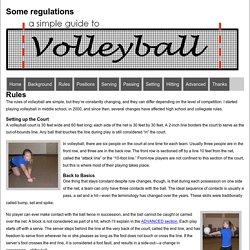 I started playing volleyball in middle school, in 2000, and since then, several changes have affected high school and collegiate rules. Setting up the Court A volleyball court is 30 feet wide and 60 feet long; each side of the net is 30 feet by 30 feet. A 2-inch line borders the court to serve as the out-of-bounds line. Any ball that touches the line during play is still considered “in” the court. In volleyball, there are six people on the court at one time for each team. Back to Basics One thing that stays constant despite rule changes, though, is that during each possession on one side of the net, a team can only have three contacts with the ball. No player can ever make contact with the ball twice in succession, and the ball cannot be caught or carried over the net. How to Play Volleyball. Steps Part 1 of 4: Playing the Game <img alt="Rotate in Volleyball Step 4.jpg" src=" width="670" height="503" class="whcdn">1Choose your players. 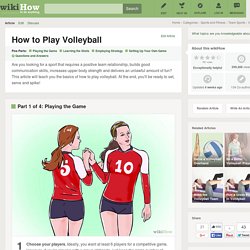 Ideally, you want at least 6 players for a competitive game. Volleyball. History Volleyball was invented in 1895 by William G. 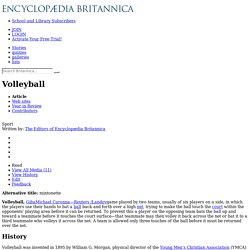 Morgan, physical director of the Young Men’s Christian Association (YMCA) in Holyoke, Massachusetts. It was designed as an indoor sport for businessmen who found the new game of basketball too vigorous. 6 Tips for A Better Serve. By Jessie Cooper Serving is one of the most critical skills a volleyball player needs to master. 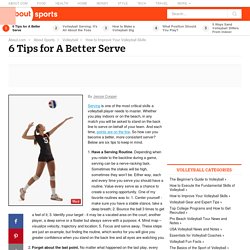 Whether you play indoors or on the beach, in any match you will be asked to stand on the back line to serve on behalf of your team. And each time, points are on the line. So how can you become a better, more consistent server? Below are six tips to keep in mind. Have a Serving Routine. Having a serve, which you can hit with consistency and authority will be an added benefit to your team. 7 Ways to be a Better Teammate. By Jessie Cooper Volleyball is a game that’s part skill and part strategy, but most of all it’s a team sport. 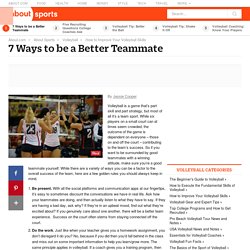 While six players on a small court can at times seem crowded, the outcome of the game is dependent on everyone – those on and off the court – contributing to the team’s success. So if you want to be surrounded by good teammates with a winning attitude, make sure you’re a good teammate yourself. Top 10 Apps for Volleyballers. By Jessie Cooper Technology is changing the way we play sports. 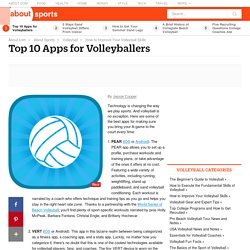 And volleyball is no exception. Here are some of the best apps for making sure you bring your A-game to the court every time: PEAR (iOS or Android): The PEAR app allows you to set up a profile, purchase workouts and training plans, or take advantage of the ones it offers at no cost. The History Of Volleyball. Where Volleyball Started. The game of volleyball, originally called “mintonette,” was invented in 1895 by William G. 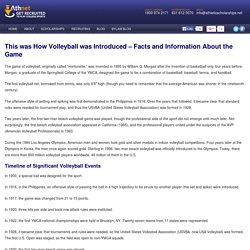 Morgan after the invention of basketball only four years before. Morgan, a graduate of the Springfield College of the YMCA, designed the game to be a combination of basketball, baseball, tennis, and handball. The first volleyball net, borrowed from tennis, was only 6’6″ high (though you need to remember that the average American was shorter in the nineteenth century). The offensive style of setting and spiking was first demonstrated in the Philippines in 1916. Over the years that followed, it became clear that standard rules were needed for tournament play, and thus the USVBA (United States Volleyball Association) was formed in 1928.

Two years later, the first two-man beach volleyball game was played, though the professional side of the sport did not emerge until much later. During the 1984 Los Angeles Olympics, American men and women took gold and silver medals in indoor volleyball competitions. Volleyball: Learn all about this fun sport. Volleyball. Volleyball passing form. Setter. Olypic Volleyball. Olympic Volleyball.