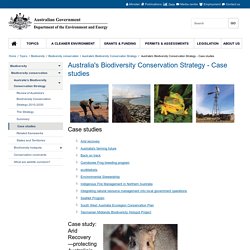 Lyon) Case study: Arid Recovery—protecting Australia’s threatened animals and ecosystems Arid Recovery is a unique partnership between industry, government, education and the community. Located near BHP Billiton’s Olympic Dam mine in northern South Australia, Arid Recovery is an ecosystem restoration initiative based around one of Australia’s largest fenced reserves, from which all feral cats, foxes and rabbits have been removed. The reserve straddles the BHP Billiton special mine lease and sections of five pastoral properties, and covers a total area of 123 square kilometres. Arid Recovery was initiated in 1997 by a partnership comprising BHP Billiton, the South Australian Department for Environment and Heritage, The University of Adelaide and a community group, Friends of Arid Recovery. 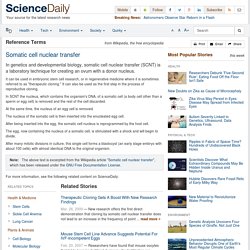 It can be used in embryonic stem cell research, or in regenerative medicine where it is sometimes referred to as "therapeutic cloning. " It can also be used as the first step in the process of reproductive cloning. What is DNA? What is DNA? - Genetics Home Reference. DNA, or deoxyribonucleic acid, is the hereditary material in humans and almost all other organisms. 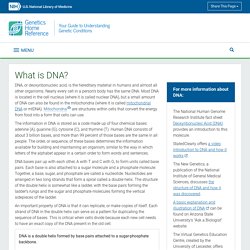 Nearly every cell in a person’s body has the same DNA. FS1 INTRODUCTION TO DNA GENES AND CHROMOSOMES. Alleles - Biology Video by Brightstorm. An allele is one of the possible forms of a gene. 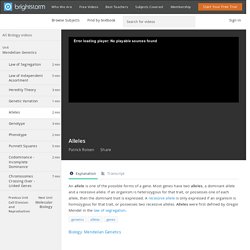 Most genes have two alleles, a dominant allele and a recessive allele. If an organism is heterozygous for that trait, or possesses one of each allele, then the dominant trait is expressed. A recessive allele is only expressed if an organism is homozygous for that trait, or possesses two recessive alleles. Alleles were first defined by Gregor Mendel in the law of segregation. When studying heredity one of the most common things to mess up is the terms gene and allele. So a gene is a particular region of your DNA that controls a specific trait. One version of that gives you the ability to roll your tongue. Now when you're naming alleles, what you do is you pick a letter that represents the gene. Cloning Fact Sheet - National Human Genome Research Institute (NHGRI) Animal Cloning > A Primer on Cloning and Its Use in Livestock Operations.

The responses to the questions provided in this document represent the FDA’s view in light of the conclusions and recommendations outlined in the Animal Cloning Risk Assessment, Risk Management Plan, and Guidance for Industry #179. 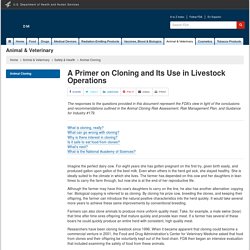 What is cloning, really? What can go wrong with cloning? Why is there interest in cloning? Is it safe to eat food from clones? What's next? Imagine the perfect dairy cow. Although the farmer may have this cow’s daughters to carry on the line, he also has another alternative: copying her. Farmers can also clone animals to produce more uniform quality meat. The History of Cloning. Sheep. 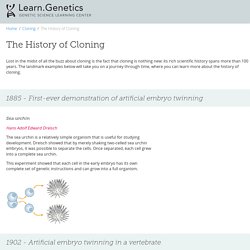 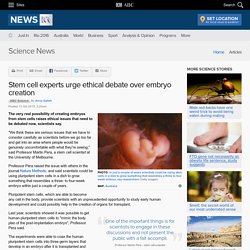 "We think these are serious issues that we have to consider carefully as scientists before we go too far and get into an area where people would be genuinely uncomfortable with what they're seeing," said Professor Martin Pera, a stem cell scientist at the University of Melbourne. Professor Pera raised the issue with others in the journal Nature Methods, and said scientists could be using pluripotent stem cells in a dish to grow something that resembles a three- to four-week embryo within just a couple of years. Pluripotent stem cells, which are able to become any cell in the body, provide scientists with an unprecedented opportunity to study early human development and could possibly help in the creation of organs for transplant. 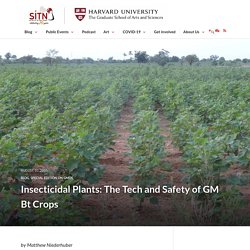 The natural insecticidal abilities of these bacteria have made them an important pest control tool for nearly a century. While their use as a natural biopesticide is widely accepted and approved for organic applications, the engineering of Bt genes into major crops has been more controversial. Protecting our food from pests has been an ongoing battle ever since humans began cultivating food. The U.S. However, with the advent of genetic engineering, new highly targeted strategies for pest control have become available in the form of transgenic plants that are designed to have insecticidal traits. Since the 1990s, corn and cotton with Bt genes have become the predominant varieties planted in North America [3]. 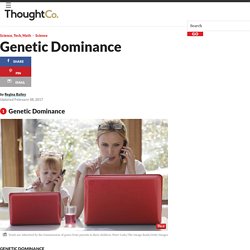