Lord Ballister Blackheart has a point to make, and his point is that the good guys aren't as good as they seem. He makes a comfortable living as a supervillain, but never really seems to accomplish much - until he takes on a new sidekick, Nimona, a shapeshifter with her own ideas of how things should be done. Unfortunately, most of those ideas involve blowing things up. Now Ballister must teach his young protégé some restraint and try to keep her from destroying everything, while simultaneously attempting to expose the dark dealings of those who claim to be the protectors of the kingdom - including his former best friend turned nemesis, Ambrosius Goldenloin. – brindill_e_webcomics

The Phoenix Requiem. Alice and the Nightmare.

Alice and the Nightmare is a comic heavily inspired by Lewis Carroll's Alice in Wonderland. It follows the story of Alice Heart as she attends the prestigious Phantasmagoria University, where Wonderlandians like her train to enter and collect the dreams of sleeping humans. The comic features magic, dark fantasy elements, and plenty of sweet tea time treats! It updates Tuesdays and Fridays. None of this would be possible without the help of my amazing friend Isabelle Melançon, who helped me revamp the story and truly made Alice and the Nightmare what it is today. She's awesome (and probably a wizard) and if you can't get enough Alice and fairy tale stuff, please go check out her comic Namesake!! It's got cool ghosts, fairy tale worlds, and fat FAT cheshire cats! – brindill_e_webcomics

Monster Pop! is a comic about two best friends and the slice of life adventures they share! Monster Pop! is set in an alternate Earth where monsters coexist with humans; sometimes they integrate well, sometimes they clash. This comic is heavily influenced by shoujo manga. Monster Pop! includes musical and interactive elements: Every now and then there will be a page with animation and/or music and most of the main characters have their own blogs (which you can find linked on the cast page). Monster Pop! is drawn by Maya Kern. Currently, updates are sporadic while my arm heals. – brindill_e_webcomics 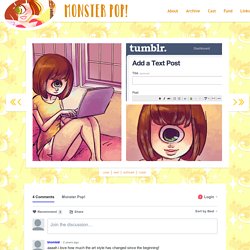 Spindrift is an online comic featuring a modern fantasy story that is being published on this very page, free to read for everyone! The first ideas for Spindrift date from 2006. The project has officially been in production since March 2011. After many hours of hard work the first pages were finally released in October 2011. New pages are being released on a weekly basis. – brindill_e_webcomics

A thousand years ago, the last colour in the world faded to grey. Now, after the great archaeological discovery of Queen Sorizahana’s shade-stocked tomb, it stands ready to enter the world again. Ironwell City will become the birthplace of the burgeoning colour industry, where colour is pumped out of factories, poured into perfumed bottles and sold at exorbitant prices to those wealthy enough to afford the luxury. At least, that’s the plan according to the Five Financiers of the Sorizahana excavation. One part Prohibition fantasy, one part Robin Hood, and a whole lot of epic heist,Shaderunners follows a group of ragtag bootleggers and bohemians who band together in an effort to steal colour from the wealthy echelons of Ironwell’s high society. Among them: a philosopher, a puppeteer, a gutter rat, an opera singer, a naval officer and a hopeless romantic. Together, they run The Glass Dial, former watch shop and future night club, where all the house drinks run red. Speak easy, pal, ‘cause the road to ruin is paved with good intentions. – brindill_e_webcomics

Les Normaux follows the lives of a bunch of supernatural beings living in Paris after a human wizard named Sebastien moved to the city. – brindill_e_webcomics

Demon of the Underground. Blindsprings. Everblue.

Everblue is a story about adventure, camaraderie and exploration in a world with an uncertain fate. In a world of endless ocean, a young shipwright named Luna meets an odd and cheerful drifter when he crashes his flying boat on her city's dock. When strange circumstances force Luna to leave her home, her once quiet life quickly takes a turn for the unpredictable. In an instant she is swept up in an adventure that will take her beyond the bounds of the charted world and into the Everblue, following the path of an ancient legend with the potential to change the world forever. Genre: Fantasy/Adventure Rating: Ages 13+ for Violence, Mild Language, and Suggestive Themes – brindill_e_webcomics

Ava's Demon is a webcomic, set on distant planets allegedly 1000 years into the future, about a 15 year old girl named Ava Ire. She has the misfortune of being haunted by a demon named Wrathia Bellarmina, who takes joy in manipulating Ava's actions to make her life as miserable as possible. Only later does Ava learn about Wrathia's true motives, and little does she know how tumultuous her life is to become. – brindill_e_webcomics

Oscar rented an old house off craigslist, then things got weird... First it was meeting the ghost of a 1940s mathematician in the upstairs hallway, then it was finding a teenage werewolf in the bathtub. Now Oscar doesn't know what will show up next. Maybe that's okay, as long as nothing eats him. Wilde Life is a supernatural adventure/horror series set in a small town in rural Oklahoma. It focuses on stories about creatures from Native American mythology as witnessed and documented by a journalist from Chicago, Illinois. It launched on September 29th, 2014 and is written and illustrated by Pascalle Lepas. Wilde Life currently updates on Monday, Wednesday & Friday. – brindill_e_webcomics

In the witch kingdom Hyalin, the strength of your magic is determined by the length of your hair. Those that are strong enough are conscripted by the Witch Guard, who enforce the law in peacetime and protect the land during war. However, those with hair judged too long are pronounced enemies of the kingdom, and annihilated. This is called a witch burning. Witchy is an ongoing webcomic about the young witch Nyneve, who is haunted by the death of her father and the threat the Witch Guard poses to her own life. When conscription rolls around, Nyneve has a choice to make; join the institution complicit in her father’s death, or stand up for her ideals? Witchy updates every Monday (or Tuesday, depending where you live). It is written and drawn by Ariel Ries, an animation student in Melbourne, Australia. – brindill_e_webcomics

Cog Kleinschmidt works happily as an artisan within the stronghold of the world’s leading empire, Mercia Fortress. He finds his life taking a screeching turn upon the arrival of a diplomat from the Kingdom of Arcadia, who needs something from Cog - whether he agrees or not! Cog soon finds himself trapped in the faraway Kingdom of Arcadia - an aristocratic haven with rich history and even richer tastes. However, Arcadia heaves with creepy undertones and conspiracies, but the citizens seem willfully ignorant of the bizarre events going on under their noses. Cog finds himself getting pulled further into Arcadia’s paranormal side, and decides the only way out is to solve the kingdom’s mysteries himself - with any help he can get from Arcadia’s stepford-like residents! – brindill_e_webcomics

Sleepless Domain is a comic about an isolated city in the middle of a dangerous world filled with monsters. During the day, the city is perfectly safe. At night, however, the populace locks themselves inside as the city streets fill with monsters. The only ones who can combat these creatures are very special girls with the power to transform into Magical Girls! – brindill_e_webcomics