A poem-dress. By Jessica Bozek These photos represent my literal take on the relationship between writing and fashion. 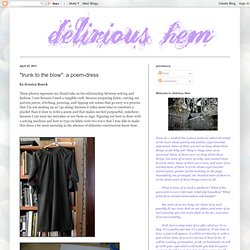 I sew because I need a tangible craft; because preparing fabric, cutting out pattern pieces, stitching, pressing, and ripping out seams that go awry is a process that I'm not making up as I go along; because it takes more time to construct a placket than it does to write a poem and that makes me feel purposeful, somehow; because I can wear my mistakes or use them as rags. Figuring out how to draw with a sewing machine and how to type on fabric were two ways that I was able to make this dress a bit more amusing in the absence of elaborate construction know-how. Bio: Jessica Bozek is the author of The Bodyfeel Lexicon (Switchback Books) and several chapbooks, including Squint into the Sun (Dancing Girl). Recent poems appear in 751, Action, Yes, Artifice, Black Warrior Review, Guernica, horse less review, and Sixth Finch.

Vintage Sewing: the “Jenny in Paris” dress « anna in technicolor. Hey, did you guys see the movie “An Education?” 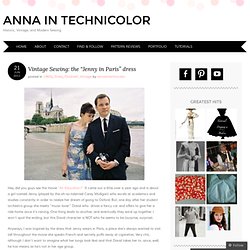 It came out a little over a year ago and is about a girl named Jenny (played by the oh-so-talented Carey Mulligan) who excels at academics and studies constantly in order to realize her dream of going to Oxford. But, one day after her student orchestra group she meets “music lover” David who drives a fancy car and offers to give her a ride home since it’s raining. One thing leads to another, and eventually they wind up together. I won’t spoil the ending, but this David character is NOT who he seems to be (surprise, surprise). Anyways, I was inspired by the dress that Jenny wears in Paris, a place she’s always wanted to visit (all throughout the movie she speaks French and secretly puffs away at cigarettes. The dress! My version is made out of a remnant of painted linen that I got from Pacific Fabrics during the Sewing Expo in February and is lined in white cotton lawn that I had in the stash.

And finally, I just had to share my new shoes! Out of Order: DIY Tutorial - Full Skirt. DIY Shift Dress. 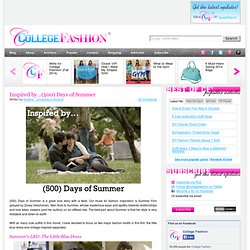 Our muse for fashion inspiration is Summer Finn (played by Zooey Deschanel). Men flock to Summer, whose mysterious ways and apathy towards relationships and love takes viewers (and her suitors) on an offbeat ride. The best part about Summer is that her style is very relatable and down-to-earth. With so many cute outfits in this movie, I have decided to focus on two major fashion motifs in this film: the little blue dress and vintage-inspired separates. Summer’s LBD: The Little Blue Dress I love the motif of the little blue dress in this movie because it is totally a reflection of Summer’s eccentric character. Here are my favorite little blue dresses that are all available for purchase right now!

Separates with a Touch of Vintage Separates are always great for college students because mixing and matching is key to getting the most bank for your buck. For my inspirational outfits I really had a lot of fun playing online dress up! Western Costume Co. There is no such thing as “impossible” in Western Costume’s Womens Workroom, which is known for inventing methods to make even the most complicated design a reality. 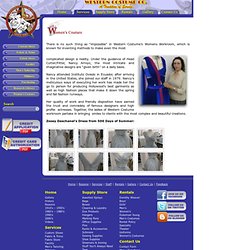 Under the guidance of Head Cutter/Fitter, Nancy Arroyo, the most intricate and imaginative designs are “given birth” on a daily basis. Nancy attended Instituto Oviedo in Ecuador, after arriving in the United States, she joined our staff in 1979. Nancy’s meticulous ways of executing her work has made her the go to person for producing Hollywood’s best garments as well as high fashion pieces that make it down the spring and fall fashion runways.

Her quality of work and friendly disposition have earned the trust and comradely of famous designers and high profile actresses. Zooey Deschanel’s Dress from 500 Days of Summer: Make This Look - StumbleUpon.