Chanel Profit Beats Rivals and Makes Owners $3B Richer. PARIS, France — The billionaire brothers who own Chanel have become almost $3 billion wealthier this year after the iconic luxury company reported a 38 percent rise in annual profit. 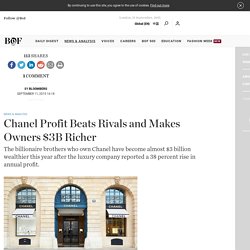 Alain and Gerard Wertheimer each have $11.8 billion fortunes and are the sixth and seventh-richest people in France, according to the Bloomberg Billionaires Index. Almost all of their fortunes stem from their stake in Chanel, which reported 2014 revenue of $7.5 billion and net income of $1.4 billion. Chanel International BV files the closely held company's global financial results with Kamer van Koophandel, the Dutch chamber of commerce. Net profit for the five publicly traded companies the index uses to value Chanel — Prada, Kering, LVMH, L'Oreal and Estee Lauder — was down a collective 6 percent in their 2014 fiscal years. The Wertheimers' fortunes have risen 13 percent since January 2014, ranking then among the world's 100 richest people.

Sophia Webster Barbie Adult and Child Shoe Collaboration. 20 August 2015 Scarlett Conlon SOPHIA WEBSTER has announced her latest collaboration and it's with none other than everyone's favourite doll, Barbie. 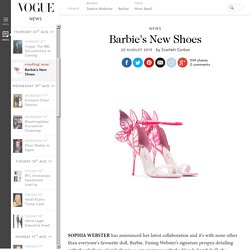 Fusing Webster's signature perspex detailing with the plethora of pink that is so synonymous with the blonde bombshell, the collection is one that exudes both the personalities of the two fashion favourites. It also marks a first for the famously vertiginous pin-up: flat shoes. Creating a shoe collection for Barbie has always been my dream project "Creating a shoe collection for Barbie has always been my dream project, but getting to be a part of her embracing flats for the first time made it extra exciting, and deeply personal," Webster told us. Related Show Barbie by Sophia Webster comprises nine styles: six for adults, including two pairs of trainers, one pair of flat sandals and three pairs of heels; and three mini-me versions for children, and will launch in Selfridges nationwide and Webster's website next Thursday, August 27. In pictures: London Fashion Week - BBC News. News navigation Sections Advertisement UK is sponsored by is sponsored by In pictures: London Fashion Week 19 September 2015 From the section UK Image copyright PA Fashionistas descend on the capital for the biannual London Fashion Week; five days of runway shows and events to showcase the upcoming trends for spring/summer 2016. 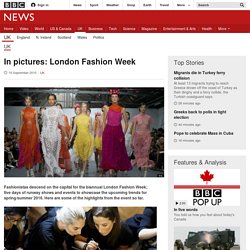 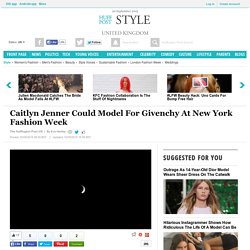 An insider told Life & Style Weekly that Jenner is in talks with Givenchy, for the Riccardo Tisci show. If the speculation is true, she would be following in the footsteps of her daughter and model Kendall. 'Dior And I' Is The Latest Fashion Flick You Need To See. "Fashion says that you can be somebody different" is how the "Dior and I" trailer begins. 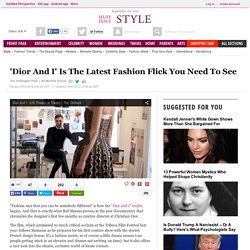 And that is exactly what Raf Simons proves, in the new documentary that chronicles the designer's first few months as creative director at Christian Dior. The film, which premiered to much critical acclaim at the Tribeca Film Festival last year, follows Simmons as he prepares for his first couture show with the storied French design house. It's a fashion movie, so of course a little drama ensues (cue people getting stuck in an elevator and dresses not arriving on time), but it also offers a rare look into the elusive, exclusive world of haute couture.

We don't want to jump the gun here, but we have a strong feeling that this is going to go on the roster of must-see flicks for the fashion (and even non-fashion) obsessed. Besides, who doesn't like seeing pretty things being made? "Dior and I" will be released on April 10. Why fashion firms like Oz crocodiles - BBC News.

Christian Dior - Autumn/Winter 2015-16 Couture - Paris. DIOR's Perspex palace this afternoon was tropical like a greenhouse: panels of paired plastic hung above a catwalk of purple AstroTurf, a modern counterpoint to a very historically referenced show. 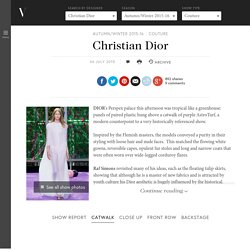 Inspired by the Flemish masters, the models conveyed a purity in their styling with loose hair and nude faces. This matched the flowing white gowns, reversible capes, opulent fur stoles and long and narrow coats that were often worn over wide-legged corduroy flares. Raf Simons revisited many of his ideas, such as the floating tulip skirts, showing that although he is a master of new fabrics and is attracted by youth culture his Dior aesthetic is hugely influenced by the historical. Alexandra Shulman. Moschino - Autumn/Winter 2015-16 Menswear - London. Chanel - Pre - Spring/Summer 2016 Ready-To-Wear - PFW. Chanel - Autumn/Winter 2015-16 Couture - Paris. THERE were two shows going on at this morning's Chanel couture offering. 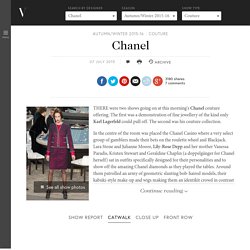 The first was a demonstration of fine jewellery of the kind only Karl Lagerfeld could pull off. The second was his couture collection. In the centre of the room was placed the Chanel Casino where a very select group of gamblers made their bets on the roulette wheel and Blackjack. Moschino - Pre - Spring/Summer 2016 Ready-To-Wear - NYFW.