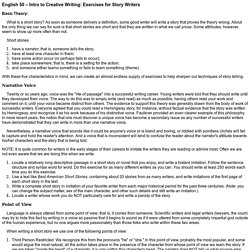 As soon as someone delivers a definition, some good writer will write a story that proves the theory wrong. About the only thing we can say for sure is that short stories are short and that they are written in what we call prose. Some attributes, however, seem to show up more often than not. Short stories have a narrator; that is, someone tells the story; have at least one character in them; have some action occur (or perhaps fails to occur); take place somewhere; that is, there is a setting for the action; and someone either learns something or fails to learn something (theme).With these five characteristics in mind, we can create an almost endless supply of exercises to help sharpen our techniques of story telling.

Narrative Voice Twenty or so years ago, voice was the "rite of passage" into a successful writing career. If you've written a story in third person, try it in first. Metaphorical You. How to Write Poetry and Live Poetically Free E-Course Lesson 19 Chapter 7 (continued): Metaphorically Speaking All the Animals You Are Join now! 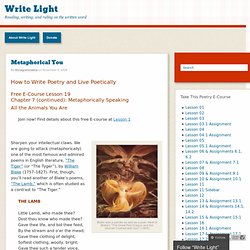 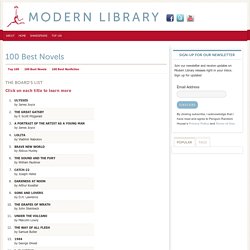 Overflowing with puns, references to classical literature, and stream-of-consciousness writing, this is a complex, multilayered novel about one day in the life of an ordinary man. Initially banned in the United States but overturned by a legal challenge by Random House’s Bennett Cerf, Ulysses was called “a memorable catastrophe” (Virginia Woolf), “a book to which we are all indebted” (T. S. Eliot), and “the most faithful X-ray ever taken of the ordinary human consciousness” (Edmund Wilson). Click here to read more about ULYSSES THE GREAT GATSBY by F. Set in the Jazz Age, The Great Gatsby tells the story of the mysterious millionaire Jay Gatsby, his decadent parties, and his love for the alluring Daisy Buchanan. A PORTRAIT OF THE ARTIST AS A YOUNG MAN by James Joyce Click here to read more about A PORTRAIT OF THE ARTIST AS A YOUNG MAN U.S.A. Great Expectations. The Cherry Orchard by Anton Chekhov – Free eBook on Read Print.