Here is the "Krill" amplifier published by Steve Dunlap at "Dunlap Audio. 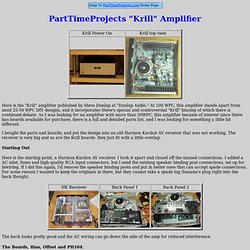 " At 100 WPC, this amplifier stands apart from most 25-50 WPC DIY designs, and it incorporates Steve's special and controversial "Krill" biasing of which there is continued debate. As I was looking for an amplifier with more than 50WPC, this amplifier became of interest since Steve has boards available for purchase, there is a full and detailed parts list, and I was looking for something a little bit different. I bought the parts and boards; and put the design into an old Harmon Kardon AV receiver that was not working. The receiver is very big and so are the Krill boards- they just fit with a little overlap.

Starting Out. 60 Watt Audio Power Amplifier. High Quality, powerful unit: 90W into 4 Ohm load, Also suited as guitar or bass amplifier To celebrate the hundredth design posted to this website, and to fulfil the requests of many correspondents wanting an amplifier more powerful than the 25W MosFet, a 60 - 90W High Quality power amplifier design is presented here. 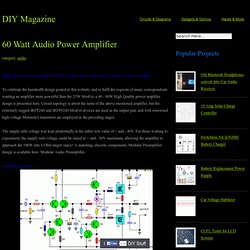 Circuit topology is about the same of the above mentioned amplifier, but the extremely rugged IRFP240 and IRFP9240 MosFet devices are used as the output pair, and well renowned high voltage Motorola's transistors are employed in the preceding stages. The supply rails voltage was kept prudentially at the rather low value of + and - 40V. For those wishing to experiment, the supply rails voltage could be raised to + and - 50V maximum, allowing the amplifier to approach the 100W into 8 Ohm target: enjoy! A matching, discrete components, Modular Preamplifier design is available here: Modular Audio Preamplifier. GB150D Power Amplifier. The GB150D features my new fully symmetrical discrete power amplifier topology that achieves absolute Hi End performance at low cost. 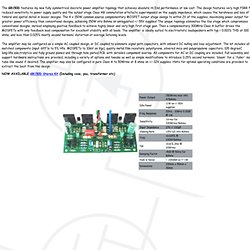 Despite the fact that class-A operation is rather inefficient, generating lots of heat and requiring a large heatsink there are some compelling arguments in its favor. 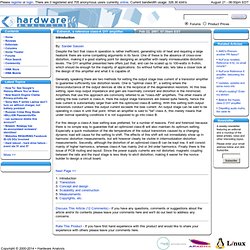 One of these is the absence of cross-over distortion, making it a good starting point for designing an amplifier with nearly immeasurable distortion levels. The DIY amplifier presented here offers just that, and can be scaled up to 100-watts in 8-ohm, which should be enough for the majority of applications. So without further ado, lets take a closer look at the design of this amplifier and what it is capable of. Generally speaking there are two methods for setting the output stage bias current of a transistor amplifier to guarantee sufficiently low distortion levels. One is "optimal class B", a setting where the transconductance of the output devices at idle is the reciprocal of the degeneration resistors. DIY 40W MOSFET AMP. DIY Amplifier gets new DIY Power Supply. I like this delay timer as it counts AC mains cycles for the delay. 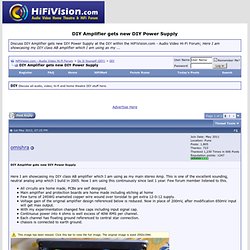 The timing chart shown is for 50Hz mains. Caution - as drawn, it is directly powered off the mains, but it should be simple to power it off a lower voltage tap (6V ac, for eg) and use a relay of the appropriate voltage. DIY 25 W Class-AB Power Amplifier. Updated 00-08-07 25 W DIY Power Amplifier Try something simple for a change When you look at DIY constructions of amplifiers, it's often large expensive designs! 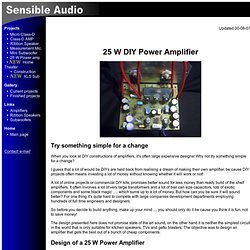 Why not try something simple for a change?

Diy Class-A mosfet amplifier A-75. A75 Class-A MOSFET Amplifier, Design by Norman Thagard and Nelson Pass RE construction by Gus This is a lovely sounding amp that has really underscores my need for a better set of loudspeakers. 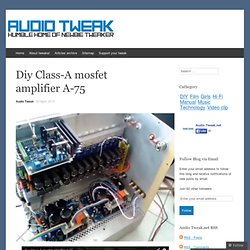 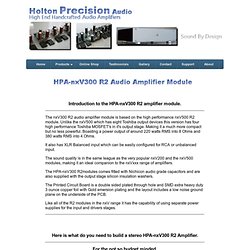 The nxV300 R2 audio amplifier module is based on the high performance nxV500 R2 module. Unlike the nxV500 which has eight Toshiba output devices this version has four high performance Toshiba MOSFET's in it's output stage. Making it a much more compact but no less powerful. Boasting a power output of around 220 watts RMS into 8 Ohms and 380 watts RMS into 4 Ohms. It also has XLR Balanced input which can be easily configured for RCA or unbalanced input.

Doug Self. Simple cost effective darlington amplifier. This amp had its genesis in the Widlar (pronounced Widelar) circuit below published in the LM308 application note of 1969 The op amp deliberately has a low resistance load R3 and R4 which means a useful current flows into or out of the transistor bases. 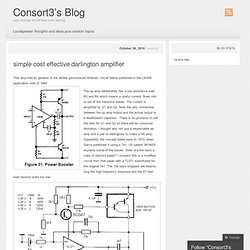 The current is amplified by Q1 and Q2. Note the only connection between the op amp output and the actual output is a feedforward capacitor. There is no provision to set the bias for Q1 and Q2 so there will be crossover distortion. I thought why not use a respectable op- amp and a pair of darlingtons to make a hifi amp. Steph on the Diyaudio site came up with a model of the Ne5534 op-amp which I am using as the basis of a simple power amp also using BDX33 & BDX34 darlington output devices.

Interesting letter on this from the late Les Sage (my fellow author in the Audio Conversions magazine of the 90’s) The NE5534 dates back to 1978, interesting comparison here with the LM318: if you thought Paul’s site covered all the topologies try this: 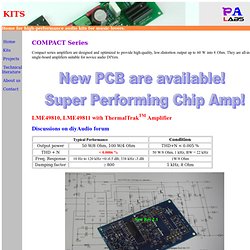 Audio Amplifier Kit - for lower prices order online through Pricedumper.co.uk. OPA541 Parts Placement Guide and PCB Foil Pattern. Leach Low TIM Power Amplifier Version 4.5 Probably one of the most celebrated power amplifiers in the web, especially to DIY enthusiasts all over the world. This amp has a very colorful history and has been updated several times since it's introduction but still resembles the first version of the amp in many ways. Thanks to it's designer W. Marshall Leach, Jr. for making this excellent amp available to everyone in the planet. You can find detailed plans and other interesting articles at Mr.

My finished and working Leach amp... Output transistors are ON Semiconductor's MJ15024/25 pair... A Chassis shot showing the whole layout... The 44V-0-44V/10A power transformer... The 35A bridge diode, ELNA 10,000uf per rail supply capacitors, bleeder resistors, snubbers and lots of decoupling caps all around. The input signal-in/overload indicator... The clipping indicator (behind the trafo)... The speaker protector with turn-on delay and dc protection... Now isn't that a beauty? Hosting by WebRing. Audio:Sounds Good to Me!