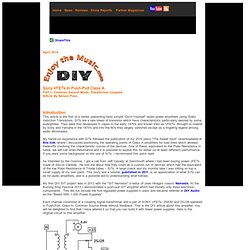 SITs are a rare breed of transistor which have characteristics particularly desired by some audiophiles. They were first developed in Japan in the early 1970's and known then as VFETs. Brought to market by Sony and Yamaha in the 1970's and into the 80's they largely vanished except as a lingering legend among audio aficionados. My hands-on experience with SITs followed the publication of my 2010 piece "The Sweet Spot" (downloadable at this link) where I discussed positioning the operating points of Class A amplifiers for load lines which allowed trade-offs involving the characteristic curves of the devices.

My first DIY SIT project was in 2012 with the "SIT Nemesis" a redux of Jean Hiraga's classic Nemesis. Nelson Pass of Pass Labs (3/2008) Nelson Pass On The Patents Of Pass. If high-end audio were to carve its own Mt. 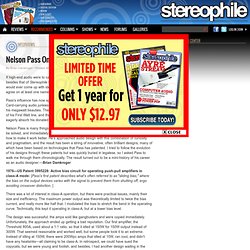 Rushmore, whose faces would appear there—besides that of Stereophile founder J. Gordon Holt, of course? It's likely that no two audiophiles would ever come up with identical lists of subjects, but I wouldn't be surprised if they could agree on at least one name: Nelson Pass. Pass's influence has now spanned three decades and shows no signs of stopping. Card-carrying audio junkies and the more-power-is-always-better crowd have long lusted after his megawatt beauties. Nelson Pass is many things, but most of all he's an engineer. 1976—US Patent 3995228: Active bias circuit for operating push-pull amplifiers in class-A mode: [Pass's first patent describes what's often referred to as "sliding bias," where the bias on the output devices varies with the signal to prevent them from shutting off, ergo avoiding crossover distortion. ] There was a lot of interest in class-A operation, but there were practical issues, mainly their size and inefficiency.

Nelson Pass F5 DIY. Pass Labs F5 Clone Recently I have been moving away from vacuum tube power amplifiers and more towards solid state amps capable of driving a pair of Electrostatics, namely an older pair of Martin Logan Aerius made around 1995. 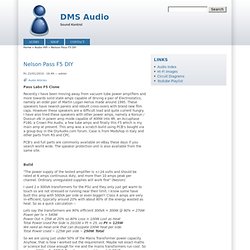 These speakers have newish panels and rebuilt cross-overs with brand new film caps. However these speakers are a difficult load and quite current hungry. I have also tried these speakers with other power amps, namely a Korsun / Dussun v6i in power amp mode capable of 400W into 4R, an Accuphase P180, a Crown Pro Audio, a few tube amps and finally this F5 which is my main amp at present.

This amp was a scratch build using PCB's bought via a group buy in the DiyAudio.com forum. PCB's and full parts are commonly available on eBay these days if you search world wide. Build "The power supply of the tested amplifier is +/-24 volts and should be rated at 6 amps continuous duty, and more than 10 amps peak per channel. 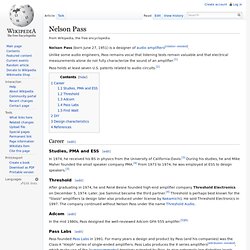 Unlike some audio engineers, Pass remains vocal that listening tests remain valuable and that electrical measurements alone do not fully characterize the sound of an amplifier.[1] Pass holds at least seven U.S. patents related to audio circuits.[2] Career[edit] Studies, PMA and ESS[edit] In 1974, he received his BS in physics from the University of California-Davis.[3] During his studies, he and Mike Maher founded the small speaker company PMA.[4] From 1973 to 1974, he was employed at ESS to design speakers.[3] Threshold[edit] After graduating in 1974, he and René Besne founded high-end amplifier company Threshold Electronics on December 5, 1974.