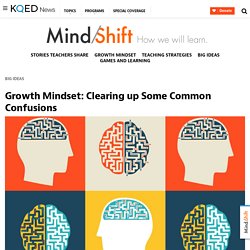 Let The River Run: Float On Down Stream. A classroom is ever changing like a river, displaying the progress, continuity and outpouring of knowledge. 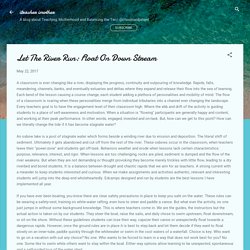 Rapids, falls, meandering, channels, banks, and eventually estuaries and deltas where they expand and release their flow into the sea of learning. Each bend of the lesson causing a course change, each student adding a plethora of personalities and mobility of mind. The flow of a classroom is roaring when these personalities merge from individual tributaries into a channel ever changing the landscape. Every teachers goal is to have the engagement level of their classroom high. 4 Ways to Reduce Classroom Risk and Reach the Whole Child. Intention is everything, especially when educating and nurturing children. 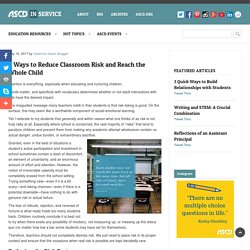 Words matter, and specificity with vocabulary determines whether or not adult interactions with kids have the desired impact. One misguided message many teachers instill in their students is that risk-taking is good. A Mindset Shift to Continue Supporting the Most Frustrating Kids. Why Language Learning Apps Haven’t Helped Struggling ELL Students. Educational Leadership:Expecting Excellence:Seven Reasons for Standards-Based Grading.

DOK in the Content Areas. #empower17. Larry Ferlazzo - Helping Students Motivate Themselves. The Teenage Brain Is Wired to Learn—So Make Sure Your Students Know It. Adolescence is an exciting time as teenagers become increasingly independent, begin to look forward to their lives beyond high school, and undergo many physical, emotional, and cognitive changes. 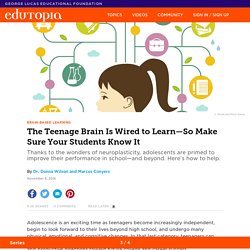 In that last category, teenagers can learn to take charge of their developing brains and steer their thinking in positive and productive directions toward future college and career success. The brain’s prefrontal cortex, which functions as the control center for executive functions such as planning, goal setting, decision making, and problem solving, undergoes significant changes during the teenage years. Resources on Learning and the Brain. Engage Students In Conversation. Schools Often Fail to Educate, Support English-Language Learners - Learning the Language. Schools across the United States often provide substandard instruction and social-emotional support to the nation's English-language learners—and fail to properly train the educators who teach them, a new report from the National Academies of Sciences, Engineering, and Medicine finds. 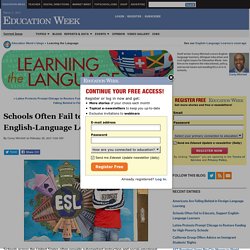 Noting that limited English proficiency remains a substantial barrier to academic success for millions of children in K-12 schools, the study explores how under-resourced schools and under-prepared educators can hinder efforts to help those students learn and master English. The committee behind the report—consisting of a who's who of experts on language acquisition and educators—also explored the struggles of specific populations of English-learners such as those with disabilities, who are less likely than their native English-speaking peers to be referred to early intervention and special education programs. Here's a link to the full report. For Further Reading on This Topic: A27. Comprehensible Input: What Teachers Can Do - Empowering ELLs. Did you get to read about Ayaka’s story in the previous article? 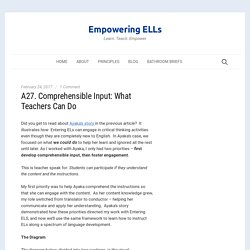 It illustrates how Entering ELs can engage in critical thinking activities even though they are completely new to English. Three Things Top Performing Students Know That Their Peers Miss. Every class has students who excel and those who don’t. 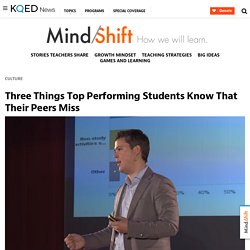 The reasons behind academic performance are myriad, but when Douglas Barton and his team at Elevate Education set out to study and benchmark the most effective practices used by top students in Australia, the U.K., South Africa and the U.S. they found three common practices. The company has used its findings to coach students on the most effective study strategies. Barton says 50 – 90 percent of students say IQ has the biggest impact on their ability to get good grades. Barton says his team found 13 other variables more important than IQ to predict academic achievement including things like self-discipline and self-motivation. Response: Understanding the Benefits of a Student&apos;s Home Language. (This is the second post in a three-part series. 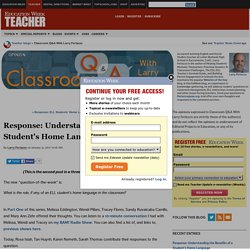 You can see Part One here.) The new "question-of-the-week" is: What is the role, if any, of an ELL student's home language in the classroom? In Part One of this series, Melissa Eddington, Wendi Pillars, Tracey Flores, Sandy Ruvalcaba Carrillo, and Mary Ann Zehr offered their thoughts. Focus 2 Achieve - Infographic: Deeper Learning. How to Put Metacognition in Process for Teachers. EFL Listening lesson: what one class learned (and taught me) about learner autonomy – DYNAMITE ELT.

This is a story about listening. 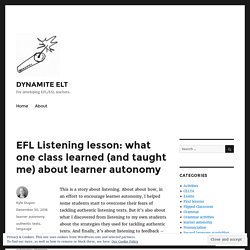 If You Teach At-Risk Kids, You Need This Book (Hint: It's not Ruby Payne) Culturally Responsive Teaching and The Brain: Promoting Authentic Engagement and Rigor Among Culturally and Linguistically Diverse Students by Zaretta Hammond, 192 pages, Corwin, November 2014Buy Now [The links in this article are Amazon Affiliate links. 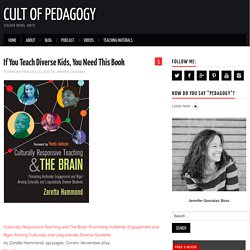 If you click these and make a purchase from Amazon, I will receive a small commission at no extra cost to you. Thanks for your support!] Evaluating Websites as Information Sources. Studies suggest that many U.S. students are too trusting of information found on the internet and rarely evaluate the credibility of a website’s information. Helping-english-learners-break-through-language-plateaus. By Wendi Pillars Moses is a charmer. He wears a perma-smile to match his unflappable sense of humor, is a smooth talker, and a great sport with adults. He speaks English colloquially with absolute savviness, much to the chagrin of many of his teachers, since much of his conversational energy is directed at friends, girls, and racking up cool points as he aims for social capital.

However, give him a diagram to label, a writing assignment to complete, a reading passage to summarize, and vocabulary to memorize, and it’s readily apparent that his social language savvy does not equate to sophisticated academic language proficiency. At 16, he is considered a long-term English-language learner (LTEL), although he has lived in the United States since he was 1 year old. Three Areas of Language Proficiency Academic language is an area teachers must target to help LTELs break through their plateaus. 1. Response: Students Exposed to Trauma are &apos;Full of Promise&apos; Education Week American Education News Site of Record.

Gritty Politti: Grit, Growth Mindset and Neoliberal Language Teaching. Over the summer, while everyone else was enjoying themselves I was ruing the day I decided to look at grit (Duckworth, 2007) for my Master’s dissertation. I decided it’s unworkable so you get to read about it here. Carol Dweck Explains The “False” Growth Mindset That Worries Her. Carol Dweck has become the closest thing to an education celebrity because of her work on growth mindset. Her research shows that children who have a growth mindset welcome challenges as opportunities to improve, believing that their abilities can change with focused effort. Kids with fixed mindsets, on the other hand, believe they have a finite amount of talent that can’t be altered and shy away from challenges that might reveal their inabilities. Dweck believes educators flocked to her work because many were tired of drilling kids for high-stakes tests and recognized that student motivation and love for learning was being lost in the process.

But Dweck is worried that as her research became more popular, many people oversimplified its message.