How Reflexology Can Help You Have Great Sex. Yes, Really - mindbodygreen.com. You’d be surprised what some footwork can do for your sex life! 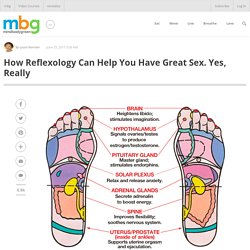 No, not dancing — I’m talking about the amazing benefits of reflexology. It gets you ready to be turned on by whatever turns you on! How Can Reflexology Help My Health and Healing? Reflexology is beneficial for restoring balance and harmony in the body and releasing tension. 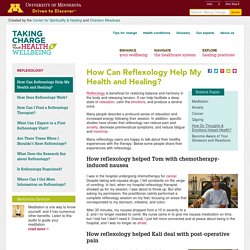 It can help facilitate a deep state of relaxation, calm the emotions, and produce a serene mind. Many people describe a profound sense of relaxation and increased energy following their session. In addition, specific studies have shown that reflexology can reduce pain and anxiety, decrease premenstrual symptoms, and reduce fatigue and insomnia. Many reflexology users are happy to talk about their healthy experiences with the therapy.

Below some people share their experiences with reflexology. How reflexology helped Tom with chemotherapy-induced nausea I was in the hospital undergoing chemotherapy for cancer. After 30 minutes, my nausea dropped from a 10 in severity to a 2, and I no longer needed to vomit. How reflexology helped Kali deal with post-operative pain I was in the hospital recovering from abdominal surgery on my intestines. Medical Applications of Reflexology - Kevin Kunz, Barbara Kunz. Mrw-thereapies4health. What is Reflexology? 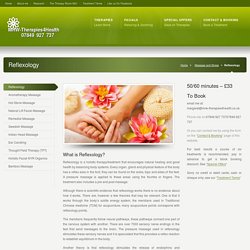 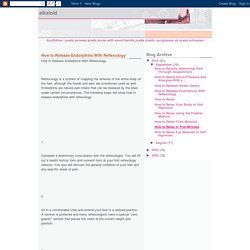 Endorphins are natural pain killers that can be released by the brain under certain circumstances. The following steps will show how to release endorphins with reflexology. Complete a preliminary consultation with the reflexologist. You will fill out a health history form and consent form at your first reflexology session. Sit in a comfortable chair and extend your feet in a relaxed position. Reflexology and the Whole Person – Interstitial Cystitis. Interstitial Cystitis (IC) is a chronic inflammation of the bladder wall, sometimes also diagnosed as Painful Bladder Syndrome (PBS). 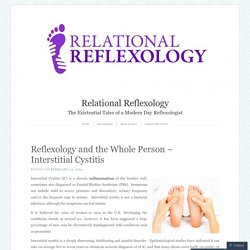 Symptoms can include mild to severe pressure and discomfort, urinary frequency and/or the frequent urge to urinate. Interstitial cystitis is not a bacterial infection, although the symptoms can feel similar. It is believed the ratio of women to men in the U.K. developing the conditions stands at around 9:1, however, it has been suggested a large percentage of men may be alternatively misdiagnosed with conditions such as prostatitis. Interstitial cystitis is a deeply distressing, debilitating and painful disorder. Epidemiological studies have indicated it can take on average five to seven years to obtain an accurate diagnosis of of IC, and that many clients score badly on quality of life studies. 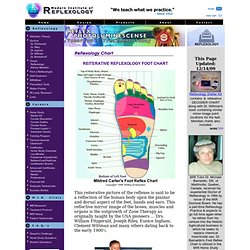 Bean of Gwinnett County, Georgia, decided to train with Modern Institute and become a Reflexologist ... she ran into governmental regulations that required a reflexologist become licensed as a Massage Therapist. Here is her story: I was asked to write my story about overcoming ill conceived governmental reflexology regulations in order to inspire others to follow their heart when confronted with such barriers. I want to let people know that just because someone says something, or the government makes a law, that doesn’t mean you can’t change it. So, here’s my recent experience with such rules and regulations.Well, as most of you know, I have been trying to get a business license in Gwinnett County for Reflexology. When I first called the county I was told I needed a certification, three letters of recommendation from registered voters in the county I live in, and I had to complete the application for the license. Articles - The Sciatic Nerve – The Nerve of Reflexology. 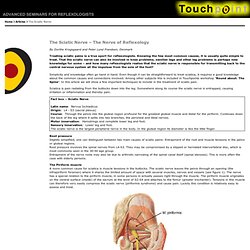 Knowing the few most common causes, it is usually quite simple to treat. That the sciatic nerve can also be involved in knee problems, swollen legs and other leg problems is perhaps new knowledge for some – and how many reflexologists realise that the sciatic nerve is responsible for transmitting back to the central nervous system all the impulses from the sole of the foot? Simplicity and knowledge often go hand in hand. Even though it can be straightforward to treat sciatica, it requires a good knowledge about the common causes and connections involved. Sciatica is pain radiating from the buttocks down into the leg.

Fact box – Sciatic Nerve Latin name: Nervus Ischiadicus Origin: L4 - S3 (sacral plexus) Course: Through the pelvis into the gluteal region profound for the greatest gluteal muscle and distal for the piriform. Figure 1. Reflexology More Powerful Than Most Medications. Stress, insomnia, digestive problems, joint pain, menopausal flushes and memory loss: all of these are common conditions that can be hard to treat, leaving sufferers in despair. 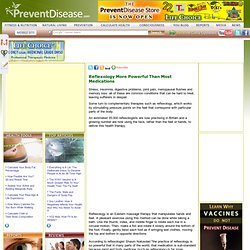 Some turn to complementary therapies such as reflexology, which works by stimulating pressure points on the feet that correspond with particular parts of the body. An estimated 35,000 reflexologists are now practising in Britain and a growing number are now using the face, rather than the feet or hands, to deliver this health therapy.