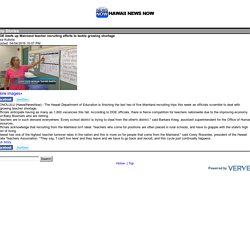 Officials anticipate having as many as 1,600 vacancies this fall. According to DOE officials, there is fierce competition for teachers nationwide due to the improving economy and Baby Boomers who are retiring. "Teachers are in such demand everywhere. Every school district is trying to steal from the other's district," said Barbara Krieg, assistant superintendent for the Office of Human Resources. Pennsylvania teacher shortage seen in lack of substitutes. Two-year drop on PA residents seeking teacher certificates: 62 percent (16,361 to 6,215) Two-year drop in certified PA teachers seeking additional certifications: 78 percent (6,622 to 1,435) Two-year drop in out-of-state residents seeking PA teacher certification: 57 percent (2,229 to 965) Say what you want about substitute teachers — and over the years, a lot has been said — but talk to any school principal and they’ll tell you it’s hard to run a school without them. 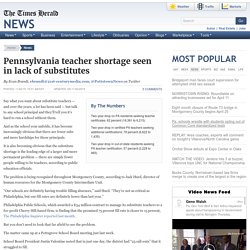 And as the school year unfolds, it has become increasingly obvious that there are fewer subs and more hardships for those principals. Decline in new teachers means a possible teacher shortage in the future. A decline in the number of new teachers statewide could eventually mean teacher shortages in Northeast Pennsylvania. 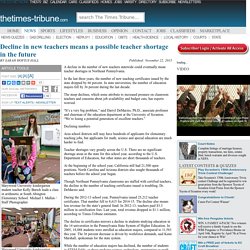 In the last three years, the number of new teaching certificates issued by the state dropped by 66 percent. In state universities, the number of education majors fell by 36 percent during the last decade. The steep declines, which some attribute to increased pressure on classroom teachers and concerns about job availability and budget cuts, has experts worried. “It’s a very big problem,” said Darryl DeMarzio, Ph.D., associate professor and chairman of the education department at the University of Scranton. Local Businessmen on the Teacher Shortage. Pennsylvania's looming teacher shortage and current substitute teacher shortage must be addressed. The number of Pennsylvanians who want to become teachers has fallen to alarmingly low levels, an LNP analysis shows, and a teacher shortage now looms. 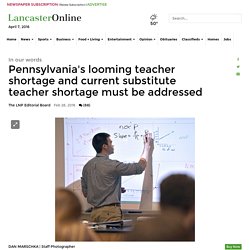 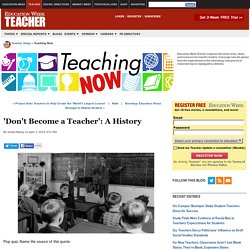 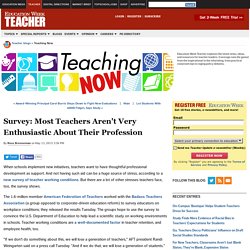 And not having such aid can be a huge source of stress, according to a new survey of teacher working conditions. But there are a lot of other stresses teachers face, too, the survey shows. The 1.6-million member American Federation of Teachers worked with the Badass Teachers Association (a group opposed to corporate-driven education reform) to survey educators on workplace conditions; they released the results Tuesday. The groups hope to use the survey to convince the U.S. Department of Education to help lead a scientific study on working environments in schools.

Is There a Teacher Shortage? That Depends How You Frame It - Teaching Now. Updated Across the country, states and districts have ramped up efforts this summer to recruit new teachers, as they work to avoid vacancies at the start of the new school year. 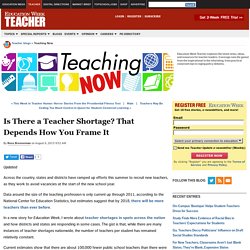 Data around the size of the teaching profession is only current up through 2011, according to the National Center for Education Statistics, but estimates suggest that by 2018, there will be more teachers than ever before. In a new story for Education Week, I wrote about teacher shortages in spots across the nation and how districts and states are responding in some cases. The gist is that, while there are many instances of teacher shortages nationwide, the number of teachers per student has remained relatively constant. Current estimates show that there are about 100,000 fewer public school teachers than there were in 2008, at the onset of the Great Recession.

At the same time, though, a soon-to-be-record-high teaching population and teacher shortages are not mutually exclusive. Don&apos;t Become a Teacher, Advises Award-Winner Nancie Atwell - Teaching Now. Why Are All the Teachers White? Billboards recruiting Kansas teachers for jobs in Missouri school district. WICHITA, Kansas — The Independence, Missouri School District is encouraging Kansas teachers to apply for jobs across the state line. 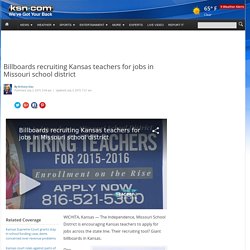 Their recruiting tool? Giant billboards in Kansas. One billboard, located on West Kellogg near Goddard, says the school district is hiring teachers for the 2015 – 2016 school year. The billboard also indicates that employment is “on the rise.” Teacher "Shortage" Coast to Coast. Talk of teacher shortages has been popping up on a state-to-state basis, so I thought I'd engage in a rare act of actual data collection. 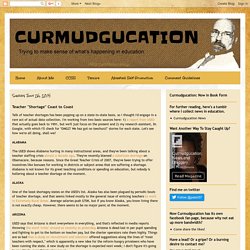 I'm working from two basic sources here: 1) a report from USED that actually goes back to 1991, but we'll just focus on the present and 2) my research assistant, Dr. Google, with which I'll check for "OMGZ! We haz got no teechurz! " stories for each state. Let's see how we're all doing, shall we? Is There a Teacher Shortage? That Depends How You Frame It - Teaching Now.

Teacher Shortage? Or Teacher Pipeline Problem? : NPR Ed. This is the canary in the coal mine. 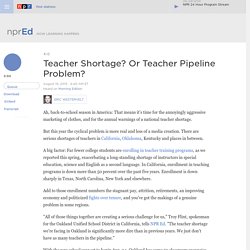 Several big states have seen alarming drops in enrollment at teacher training programs. The numbers are grim among some of the nation's largest producers of new teachers: In California, enrollment is down 53 percent over the past five years. It's down sharply in New York and Texas as well. In North Carolina, enrollment is down nearly 20 percent in three years. Responding to the Teacher Shortage. California faces a dire teacher shortage. Should other states worry, too? California should consider recruiting teachers as early as high school and offer clear pathways to the classroom for aspiring educators who transfer from other careers or states to mitigate a chronic teacher shortage. Those are two of the policy recommendations in a new report by the nonprofit California-based Learning Policy Institute, which suggested seven strategies to get more teachers into the classroom, especially in hard-to-fill positions.

“When California last experienced severe teacher shortages in the late 1990s, it took a wide array of programs to begin to stabilize the teaching force,” wrote the authors of the report. “Most of these have, unfortunately, been discontinued or sharply reduced since then, leaving the state with few existing tools to use to address the current situation.”

The real reasons behind the U.S. teacher shortage. Kindergarten teacher Gracia Hidalgo, left, welcomes new student Valentina Tapia, 5, and her mother, Andrea Tapia, center, before the start of the first day of school Monday at T.J. Austin Elementary School in Tyler, Tex. (Andrew D. Teacher Shortage Areas. Annual publication of the Teacher Shortage Area Nationwide Listing designated by the Department of Education as required under the following program regulations: 34 CFR 682.210(q) enables a borrower who had no outstanding Federal Family Education Loan (FFEL) Program loan on July 1, 1987 but who had an outstanding FFEL Program loan on July 1, 1993 to qualify for deferment of loan repayment under the Federal Stafford Program anytime within the life of the borrower’s loan(s); 34 CFR 674.53(c) enables Federal Perkins Loan borrowers who are full time teachers of mathematics, science, foreign languages, bilingual education or any other field of expertise where the State educational agency determined there is a shortage of qualified teachers to qualify for cancellation of up to 100 percent of their loan; and 34 CFR 686.12(d) enables grant recipients to fulfill their teaching obligation under the Teacher Education Assistance for College and Higher Education (TEACH) Grant Program.

Problems with School Ratings. Recently Chad Aldeman (Bellwether) ran an interview with a school ratings "expert," Christy Hovanetz. Hovanetz is from the Jeb Bush wing of the reformster world, having cut her teeth on Florida Ed policy in 1999, graduating to Foundation for Excellence in Education, the reform advocacy group that was supposed to help Jeb! Restoring Science to Science Education. Lisa Nielsen: The Innovative Educator. 10 Critical Issues Facing Education. The Tech - Articles by Ryan T. Normandin. By Ryan T. Normandin April 9, 2010 A year ago I too was a high school senior with a decision to make — what college should I attend? Since you are reading this article, you can probably guess that I chose MIT. A year later, I can say that I am very glad that I did. February 5, 2010. The Origins of the Public School.

Hardly anyone disputes the contention that the modem public school is seriously flawed. CorpWatch : The Education Industry: The Corporate Takeover of Public Schools. If you want to get a sense of how pervasive corporate influence in U.S. education is, just take a tour of your neighborhood school. Rethinking Education, Part I : Why Our School System Is Broken. The U.S. ranked 24th of 29 OECD countries in problem solving among fifteen-year-old students. 25th of 30 in mathematics, 21st of 30 in science, and 15th of 29 in reading literacy. Yet, the US is near the top of the chart on education spending, with over $10,000 spent on a pupil per year. The Invented History of 'The Factory Model of Education' 12 min read. Block Scheduling Teaching Strategies. BLOCK SCHEDULING  from a MATH TEACHER. Research Spotlight on Block Scheduling. Restoring Science to Science Education.

The New School: How the Information Age Will Save American Education from Itself. A new model of public education. Block Scheduling Teaching Strategies. Block Scheduling: A Solution or a Problem? AdLIT > In Perspective Magazine > Differentiation at the Secondary Level. 10 Major Challenges Facing Public Schools. How to Deal with Teenage Learning Fatigue. The Global Achievement Gap: Why America's Students Are Falling Behind. What's Worth Learning: How Outdated Curricula Are Failing America's Students. Outdated teaching is failing our children. Experts Challenge High Schools to Revamp Outdated School Day, Year - High School Notes. Our Education System is not so much “Broken” – as it is Totally Outdated! Books published by Marion Brady, and with Howard Brady on curriculum courses. What if we radically changed our high schools and turned them into something different?