Welcome to OpenGameArt.org. How to make a Facebook social game. Hi and welcome back to my blog! 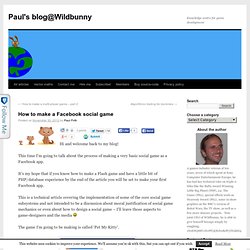 Game Art. Make video games - The complete free tutorial. Okay so you want to make your own video game. 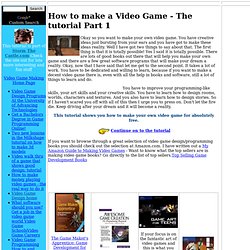 You have creative ideas just bursting from your ears and you have got to make these ideas reality. Well I have got two things to say about that. The first thing is that it is totally possible! Yes I said it is totally possible. There are lots of good books out there that will help you make your own game and there are a few great software programs that will make your dream a reality. You have to improve your programming-like skills, your art skills and your creative skills. Tutorial on 9845 Game Design. Why and How As long as automated data processing exists, implementing games on computer systems had been one of the most deeply settled desires of any computer programmer. 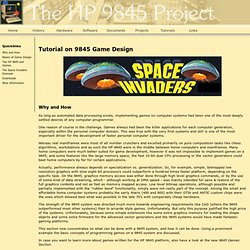 One reason of course is the challenge. Games always had been the killer applications for each computer generation, especially within the personal computer domain. This was true with the very first systems and still is one of the most important driver for the development of faster personal computer systems. Wereas real mainframes were most of all number crunchers and excelled primarily on pure computation tasks like chess algorithms, workstations and as such the HP 9845 were in the middle between home computers and mainframes. Actually, performance always depends on specialization vs. generalization. Tutorial List of Articles for Game Level Design and Game Environments. Scalable Game Design wiki. Frogger is a good first game design activity for students with no programming background. 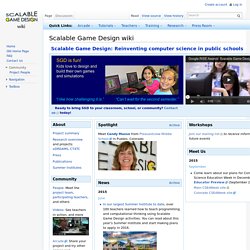 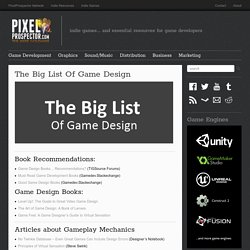 The Worst Game Feature Ever » Level 99 Games. We play games–all kinds of games from sports to board games to video games–in order to do. 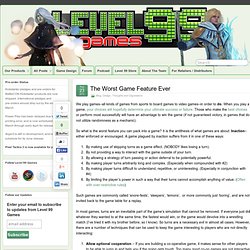 When you play a game, your choices will hopefully determine your ultimate success or failure. Those who make the best choices or perform most successfully will have an advantage to win the game (if not guaranteed victory, in games that do not utilize randomness as a mechanic). Escape the Room Kit - Learn how to make your own 'Escape the Room' game. Welcome to the first Flash Classroom Resource Kit for classroom use. This kit has been designed to contain all you'll need to be able to begin the adventure with game design in your classroom. The kit supports teachers and students using Flash 8. An Overview of Escape the Room Games. Good Rules, Bad Rules » Level 99 Games. I played a game last night called Inn Fighting. 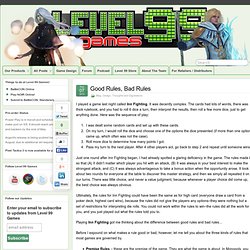 It was decently complex. The cards had lots of words, there was thick rulebook, and you had to roll 6 dice a turn, then interpret the results, then roll a few more dice, just to get anything done. Here was the sequence of play: I was dealt some random cards and set up with these cards.On my turn, I would roll the dice and choose one of the options the dice presented (if more than one option came up, which often was not the case).Roll more dice to determine how many points I got.Pass my turn to the next player. After 4 other players act, go back to step 2 and repeat until someone wins. Game Design Tutorials » Level 99 Games. This page contains of list of the game design tutorial series, written gradually by D. 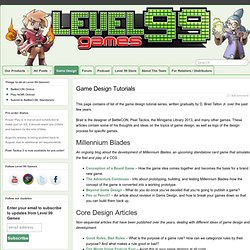 Brad Talton Jr. over the past few years. Brad is the designer of BattleCON, Pixel Tactics, the Minigame Library 2013, and many other games. These articles contain some of his thoughts and ideas on the topics of game design, as well as logs of the design process for specific games. Make video games - The complete free tutorial. Tutorial List of Articles for Game Level Design and Game Environments. The Designer's Notebook: Eight Ways To Make a Bad Tutorial. 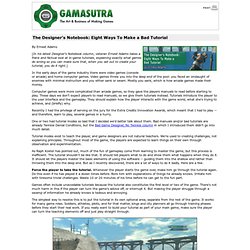 In the early days of the game industry there were video games (console or arcade) and home computer games. Video games threw you into the deep end of the pool: you faced an onslaught of enemies with minimal instruction and you either sank or swam. Mostly you sank, which is how arcade games made their money. Make Games - Finishing a Game. BASIC Gaming - Issue #3. Witchcraft Adventure developed by N3trunn3r Written by Lachie Dazdarian (November, 2011) Introduction Witchcraft Adventure is a first-person view dungeon crawler, Dungeon Master-style, but it introduces a novel idea by featuring a top-down view mode that switches on when the player dies. 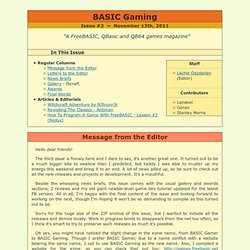 As a ghost the player can pass through walls, talk with other ghosts and learn secrets from them, explore the map further than it's possible when alive, and finally revive on specific locations. This concept enables a wonderful interplay of the two different game modes and results with great gameplay experience. But allow me to present a little bit of background regarding the creation of Witchcraft Adventure, as it is important to explain the origin of the already mentioned game mechanics, the game's strongest aspect. Witchcraft Adventure was originally developed for a FreeBASIC Games Directory sponsored competition about some 10 months ago, which had a "gameplay combo" theme. Tutorial: Basic Game Design · LaurentGomila/SFML Wiki.