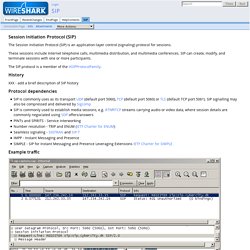 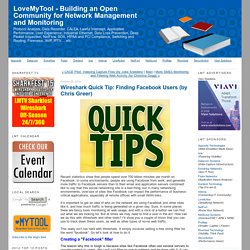 In some environments, people are using Facebook from work, and generate more traffic to Facebook servers than to their email and application servers combined! Not to say that this social networking site is a bad thing, but in many networking environments, over-use of sites like Facebook can impact the performance of business-critical applications, especially at remote offices with small WAN links. It’s important to get an idea of who on the network are using Facebook and other sites like it, and how much traffic is being generated on a given day. Sure, in some places there are fancy tools monitoring all web usage, and with a click of a button we can find out what we are looking for. But at times we may need to find a user in the act. 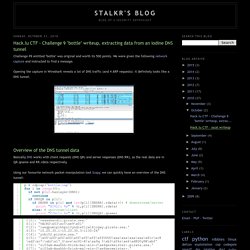 We were given the following network capture and instructed to find a message. Opening the capture in Wireshark reveals a lot of DNS traffic (and 4 ARP requests): it definitely looks like a DNS tunnel. Overview of the DNS tunnel data Basically DNS works with client requests (DNS QR) and server responses (DNS RR), so the real data are in QR.qname and RR.rdata respectively. 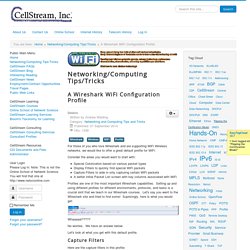 Wireshark—Display Filter by IP Range - PacketU. How many times have you been using Wireshark to capture traffic and wanted to narrow down to a range or subnet of IP addresses? 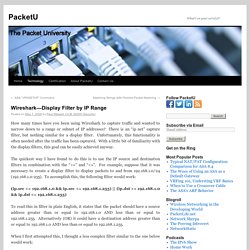 There is an “ip net” capture filter, but nothing similar for a display filter. Unfortunately, this functionality is often needed after the traffic has been captured. With a little bit of familiarity with the display filters, this goal can be easily achieved anyway. Tools - The Wireshark Wiki. This is a place for scripts and tools related to Wireshark / TShark that users may like to share, and for links to related NetworkTroubleshooting tools. 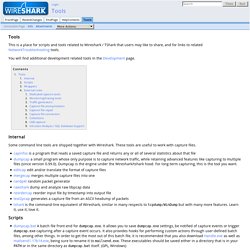 Some command line tools are shipped together with Wireshark. These tools are useful to work with capture files. dumpcap.bat A batch file front-end for dumpcap.exe. It allows you to save dumpcap.exe settings, be notified of capture events or trigger dumpcap.exe capturing after a capture event occurs. It also provides hooks for performing custom actions through user-defined batch files, among other things.

Computer Networks—Wireshark Labs. Note: Examples of student project reports will be made available to course instructors upon request ( send email ). 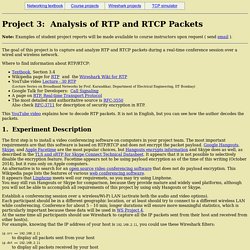 The goal of this project is to capture and analyze RTP and RTCP packets during a real-time conference session over a wired and wireless network. Where to find information about RTP/RTCP: This YouTube video explains how to decode RTP packets. It is not in English, but you can see how the author decodes the packets. 1. The first step is to install a video conferencing software on computers in your project team.

Establish a conferencing session over a wireless/Wi-Fi LAN (activate both the audio and video options). Tshark examples: howto capture and dissect network traffic [CodeAlias] This page contains a collection of useful examples for using tshark, the network traffic capture and analysis tool. 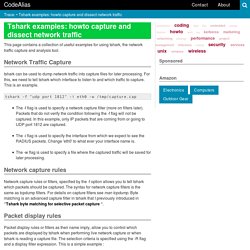 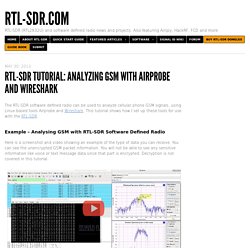 This tutorial shows how I set up these tools for use with the RTL-SDR. Example – Analysing GSM with RTL-SDR Software Defined Radio Here is a screenshot and video showing an example of the type of data you can receive. You can see the unencrypted GSM packet information. You will not be able to see any sensitive information like voice or text message data since that part is encrypted.

First, you will need to find out at what frequencies you have GSM signals in your area. Audio Player The rest of the tutorial is performed in Linux and I will assume that you have basic Linux skills in using the terminal. Update: Note that the latest version of Kali Linux comes with GNU Radio pre-installed, which should allow you to skip right to the Install Airprobe stage. Open up Kali Linux in your VMWare player and login. Install GNU Radio. Use Wireshark to Decrypt HTTPS. Not matter you are a network app developer or network administrator, you may need to debug or troubleshoot encrypted network protocol HTTPS. 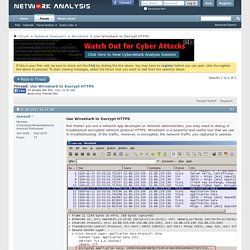 Wireshark is a powerful and useful tool that we use in troubleshooting. If the traffic, however, is encrypted, the network traffic you captured is useless. Look at the figure above that there is TLSv1 protocol and application data is encrypted. We can’t tell a thing with the encrypted data. Decrypt WPA2-PSK using Wireshark. In this post we will see how to decrypt WPA2-PSK traffic using wireshark. This is useful when you study (my case for CWSP studies) different security protocols used in wireless.Here is the basic topology for this post. Before start capturing you should know which channel your AP is operating. Since my AP is managed by WLC 4400, I can simply get that info from CLI.

You can filter on almost anything in a packet, and ever since the filter box started suggesting possible filter expressions it got really easy to find the one you wanted. We don’t even need the excellent “Wireshark Display Filter” cheat sheets from packetlife.net anymore (well, Jeremy still has a lot of other, really helpful cheat sheets, so check them out). Basic filtering As I said, in really old Wireshark versions, the filter box did not yet help with finding the correct filter, so it often took quite some time to get the filter expression right. My buddy Eddi used to impress people with the speed he could tell what the correct filter name was for a field in the decode, but that was just some Wireshark sleigh of hand – whenever you select a field, the status bar will show the according filter in the lower left corner.

Here’s an example for reading the filter name for the Maximum Segment Size value: Filtering - Wireshark Display Filter protocol==TLSV1? (and PacketLength) Top 10 Wireshark Filters (by Chris Greer) Author Profile - Chris Greer is a Network Analyst for Packet Pioneer. Chris has many years of experience in analyzing and troubleshooting networks. He regularly assists companies in tracking down the source of network and application performance problems using a variety of protocol analysis and monitoring tools including Wireshark.

When he isn’t hunting down problems at the packet level, he can be found teaching various analysis workshops at Interop and other industry trade shows. How to Use Wireshark to Capture, Filter and Inspect Packets. Wireshark, a network analysis tool formerly known as Ethereal, captures packets in real time and display them in human-readable format. Wireshark includes filters, color-coding and other features that let you dig deep into network traffic and inspect individual packets. This tutorial will get you up to speed with the basics of capturing packets, filtering them, and inspecting them. You can use Wireshark to inspect a suspicious program’s network traffic, analyze the traffic flow on your network, or troubleshoot network problems.

Getting Wireshark You can download Wireshark for Windows or Mac OS X from its official website. Sniffing email passwords with Wireshark. Learn How To Hack - Ethical Hacking and security tips: How To Hack HTTP Passwords With Wireshark. Most of the websites on the Internet use HTTP protocol for comunication which runs on Port 80, The data send to the server is Un-encrpypted and goes in plain text.

If you are using HTTPS (Port 443), The data will be send to the server encrypted. When ever you enter the data in a Form, Your browser either sends a POST Or Get Request to the webserver, In most cases you will see POST method used in forms. Now most of the websites on the internet use Http protocol for the authentication, which enables an attacker on the local area network to sniff every thing that goes through that form, That's the reason why you see websites like Paypal, Ebay, Gmail with https.

In this tutorial, I will show you how a hacker can hack passwords sent via http to the server with wireshark. Wireshark is a network analysis tool used to capture and analyze all the packets being send from your computer to the server. Attack Scenario. Hacker Academy Module - Network Analysis - Wireshark. Hack facebook account using wireshark .............cookie stealer. Hack a Facebook account with cookie stealing Hey!! Tools. WIRESHARK - The Easy Tutorial - Statistics. TOTALSince dec 2006 1'942'871 Visitors 4'218'042 Pages Nov 2010 Stats 82'909 Visitors 146'476 Pages196 countriesFull statistics Help us translate our tutorials!

JOIN theOpenManiak Team. Wireshark Tutorial - part 4. Decrypt SSL/TLS with Wireshark. Sometimes you find yourself needing to do some sniffing with Wireshark but then you realize that all you see is the SSL traffic. In some cases you can use Fiddler and have it do MITM on the SSL but only if you’re on the client and for some types of traffic. In my example i want to do some sniffing on one of my Exchange servers. Wireshark. Kind of swiss army knife for catch, analyse and understand network problems. How to dissect the MMS pdu encrypted with TLS? - Wireshark Q&A. I found the solution! In the SSL protocol preferences -> RSA keys list -> Edit the protocol I choosed was wrong. The correct one is tpkt, not mms. Ssl - Can I modify a private key validity? The Linux Blog » wireshark-filter man page. Wireshark-filter - Wireshark filter syntax and reference. Man page wireshark-filter section 4. Wireshark Developer’s Guide. 10.9. Obtaining packet information Represents an address. 10.9.1.1.

Address.ip(hostname) Blog.gsec.se/2014/03/14/decrypt-ssltls-with-wireshark/ Day by day… Read Content-Encoding gzip data from captured stream. Well, it appear to be easy, but not for me. Troubleshooting cheat sheet - howto decrypt SSL data with Wireshark. Novell Home. Tools - The Wireshark Wiki. How to Use libwireshark in C Program to Decode Network Packets. Corelabs site.