Schoolma’am May has offered a gift to Nicola Sturgeon. The uninitiated, on first encountering an SNP conference, might think that they were already stepping on to independent turf and that only the flourish of a civil servant’s pen was required to make it official. 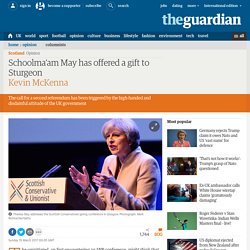 After two or three days of being held in the embrace of such boundless optimism you sometimes find yourself desperately seeking a dose of misery just to feel normal and Scottish once more; a Pink Floyd album perhaps, or a video of Great Scotland World Cup disasters. Yet, courtesy of Theresa May’s constitutional intervention, the waves of optimism washing over SNP delegates at the party’s conference in Aberdeen this weekend were turned into something approaching certainty. In stating her refusal to sanction a second referendum the day after Nicola Sturgeon had finally expressed her intention to seek one, the prime minister gave the SNP a gift. 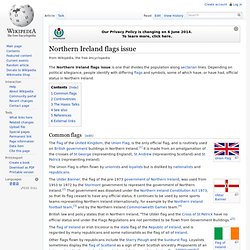 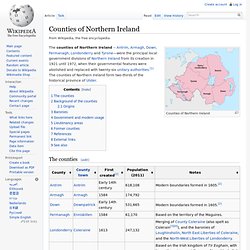 The counties[edit] Background of the counties[edit] The English administration in Ireland in the years following the Anglo-Norman invasion of Ireland created counties as the major subdivisions of an Irish province.[2] This process lasted a period from the 13th to 17th centuries, however the number and shape of the counties that would form the future Northern Ireland would not be defined until the Flight of the Earls allowed the shiring of Ulster from 1604.[1] Citizenship and nationality. Irish nationality law. Irish nationality law is contained in the provisions of the Irish Nationality and Citizenship Acts 1956 to 2004 and in the relevant provisions of the Irish Constitution. 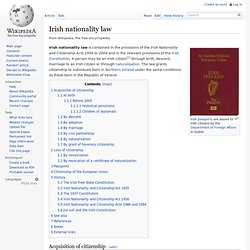 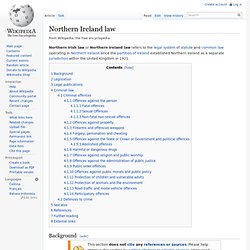 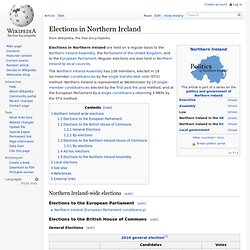 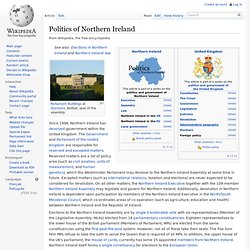 The Government and Parliament of the United Kingdom are responsible for reserved and excepted matters. Reserved matters are a list of policy area (such as civil aviation, units of measurement, and human genetics), which the Westminster Parliament may devolve to the Northern Ireland Assembly at some time in future. Excepted matters (such as international relations, taxation and elections) are never expected to be considered for devolution. Could Irish history offer answers in the Scottish Independence debate? 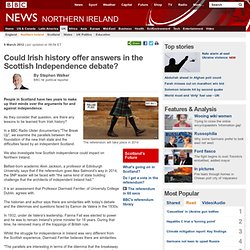 Scottish independence referendum: What is devolution max? 20 February 2012Last updated at 14:39 By Michael Buchanan BBC News Looking to the future - will it be "as-you-are", "devo max" or full independence? 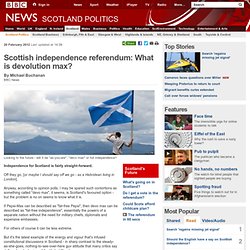 Independence for Scotland is fairly straight-forward. Off they go, [or maybe I should say off we go - as a Hebridean living in London]. Anyway, according to opinion polls, I may be spared such contortions as something called "devo max", it seems, is Scotland's favoured option - but the problem is no on seems to know what it is. If Pepsi-Max can be described as "fat-free Pepsi", then devo max can be described as "fat-free independence", essentially the powers of a separate nation without the need for military chiefs, diplomats and expensive embassies. The science of independence: has Scotland's number come up? 19 February 2012Last updated at 15:06 By Ken Macdonald BBC Scotland Science Correspondent The researchers used mathematics to identify where new nations were likely to be born Scotland's constitutional debate does not lack for claim and counterclaim. 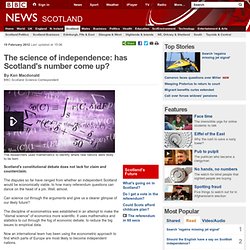 Scottish electoral geography is working to the SNP’s advantage. (Photo: Jeff J Mitchell/Getty) The dramatic rout of Scottish Labour continues. Polls suggest the SNP will take 55 out of 59 seats and of the 14 constituencies surveyed by Lord Ashcroft, only Glasgow North East is set to remain in Labour hands. Such political collapses are rare in UK politics – so what’s going on? Prior to 2011, the dividing line of Scottish politics was ‘to be or not to be’ Labour. This was a huge advantage to a party which, faced with split opposition, managed to win 69% of Scottish seats in 2010 with just 42% of the vote. Scotland’s Place in the World and the Problem with British Isolationism.

Scotland’s Place in the World and the Problem with British Isolationism Gerry Hassan. The Truth About Scottish Independence: The McCrone Report Scandal. The McCrone Report. Mc Crone Oil Report McCrones Report Gavin McCrones Top Secret Oil Report McCrone North Sea Oil Report. Only a vote for the SNP will stop the Tories slashing more Scottish budgets etc. The Conservative commissioned Mc Crone Report - that was classified Top Secret This report was then passed in secret to the Labour Party when they took power. Why is Willie MacRae a Scottish nationalist politician and lawyer best remembered for the mystery surrounding his death.

Watch some videos ... After you read this Top Secret Report (go to page 4 first) into the VAST wealth Scotland's oil and gas generates for London. McCrone and the trust of the Scottish people. Wednesday, 02 November 2011 16:04 by David Milligan The McCrone Oil Report was released after a Freedom of Information request in 2005 shortly after the law regarding information such as this was brought in. Not much has been said about the background of the people surrounding it and I decided to do on-line research to establish or discredit this document, which the British government classified as secret. It gives an insight into the thinking of the politicians surrounding the events of that time (1975), and clearly shows that Scotland would have done very well if it had gone independent at that time. Why is this document relevant now? Dear Scotland: here are 76 things we'd like to apologise for, love England. 1 Sorry for calling every last one of you "Jock".

We now know it's offensive, especially if you're a woman. 2 So sorry for the years of heartless Conservative governments that you never voted for that ripped the heart out of the Scottish mining, steel and shipbuilding industries, butchered public services and imposed an unwonted, dismal neo-liberal ethos on a land to which such a callous political and economic philosophy was inimical. 3 And for making you guinea pigs for Margaret Thatcher's disastrous poll tax, inflicting it on you a year before England and Wales, and then – somehow! In five years' time, the Union will be no more. At its appointed time, the moment of truth chose a plain basement hotel suite in Inverness on a grey afternoon to manifest itself. 'Devo plus' for Scotland? Let's unpack it. David Cameron's union address: a speech of style but no substance.

Scottish independence is fast becoming the only option. Those among my friends who have lost their religious faith have described it as a desolate process. Rather than experiencing a rush of euphoria at liberation from a restrictive credo, they speak of their sadness as, one by one, the illuminations on their once cherished pillars are extinguished. An independent Scotland must own its energy sources. In an upper room of St Andrew's House an elite squadron of civil servants are doing what they do best: removing any lingering vestige of colour or drama from the white paper on independence. The poverty of the Better Together campaign. More power to Glasgow's online journalists.

To those who know about these things, the signs and symbols that recently began to appear buried deep beneath the streets of Glasgow were unmistakable: the cybernats are coming to get us and our children are in peril. It was these fears presumably that must have informed the decision of Strathclyde Partnership for Transport to outlaw a series of unique and paid-for adverts by the nationalist website Wings Over Scotland: "There are 37 national or daily newspapers in Scotland. Scottish referendum: why Chomsky's yes is more interesting than Bowie's no. 'My intuition favours independence,' Chomsky told the Russian news agency RIA Novosti.

Photograph: Graeme Robertson It wasn't only the anarcho-syndicalists who got excited. In lending his support to Scottish independence, Noam Chomsky generated a palpable buzz among yes activists: "Noam" even started to trend among Glasgow's twitterati. The referendum campaign's not toxic, but intoxicating. Fewer than 100 sunsets now until dawn breaks on Scotland's fateful day and the campaign has just become reassuringly and pleasingly poisonous.