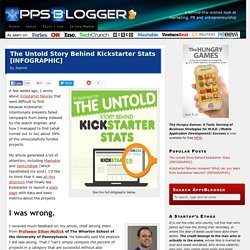 A few weeks ago, I wrote about Kickstarter failures that were difficult to find because Kickstarter intentionally prevents failed campaigns from being indexed by the search engines…and how I managed to find (what turned out to be) about 59% of the unsuccessfully funded projects. My article generated a lot of attention, including Mashable and VentureBeat (which republished my post). I’d like to think that it was all this attention that finally led Kickstarter to launch a stats page with data and basic metrics about the projects. I was wrong. Prof. I received much feedback on my article, chief among them from Professor Ethan Mollick of The Wharton School of the University of Pennsylvania. Also, some people objected to my use of the term “failure” on projects that did not get fully funded.

Give us some real insights! I heard you loud and clear, so I got in touch with Prof. And don’t think that crowdfunding is a passing fad, either. Kickstarter failures revealed! What can you learn from Kickstarter failures? [INFOGRAPHIC] See the full infographic below. 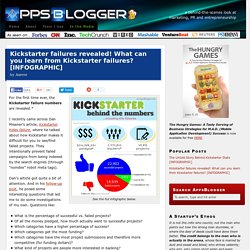 For the first time ever, the Kickstarter failure numbers are revealed.* I recently came across Dan Misener’s article, Kickstarter hides failure, where he talked about how Kickstarter makes it difficult for you to see/find failed projects. They intentionally prevent failed campaigns from being indexed by the search engines (through “noindex” robot meta tags). Dan’s article got quite a bit of attention. What is the percentage of successful vs. failed projects?

As an entrepreneur who’s looking at Kickstarter as a potential source of funding, I’m very interested in these numbers and the insights they provide. To get these questions answered, I had a scraper script written (not by me) that was able to scrape all the projects as of June 2, 2012, including those that failed to achieve their funding goal. Kickstarter in 2015 - Review in numbers - ICO Partners. Steam Spy: The missing manual – Steam Spy – Medium. Steam Spy had grown a bit out of control lately. 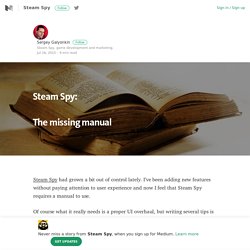 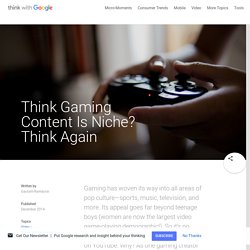 Its appeal goes far beyond teenage boys (women are now the largest video game-playing demographic!). So it's no surprise that gaming content has taken off on YouTube. Why? As one gaming creator put it, "You don't have to play soccer to enjoy it on TV. " From an advertiser's perspective, gaming content is a rare breed—one that delivers engagement and reach. Written by Gautam Ramdurai Published December 2014 Topics Put Google research and insight behind your thinking. Quit my full time corporate job. Built an iOS game. It became #1 in the App Store. Here are revenue numbers and what I learned. : startups. Some things you should know about Steam – Steam Spy – Medium.

The information in this article was gathered with the help of the tool Steam Spy that I’ve developed. 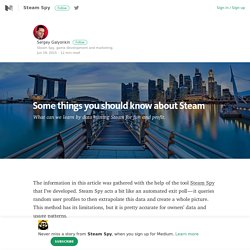 Steam Spy acts a bit like an automated exit poll — it queries random user profiles to then extrapolate this data and create a whole picture. This method has its limitations, but it is pretty accurate for owners’ data and usage patterns. This article is based on the talk I gave at DevGAMM 2015. It was originally published in “Making Games” magazine. Geography Let me start by saying that there are a lot of stereotypes about what people from different countries are playing and what genres they do prefer.

For example, US is the biggest country on Steam with roughly 22.5 million users (18 percent of the Steam audience) and as you would expect, Americans love their open-world games and shooters. That is not surprising and you wouldn’t discard USA as a market anyway — it is too big, too rich and too loud. Kickstarter and Games - September 2012. New mobile game statistics every game publisher should know in 2016. While the mobile app market is more competitive than ever, the opportunities remain huge. 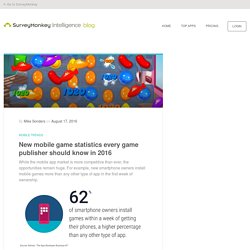 For example, new smartphone owners install mobile games more than any other type of app in the first week of ownership. Source: Admob, “The App Developer Business Kit” To get an edge in this crowded market, mobile game publishers need competitive intelligence that reveals the most attractive opportunities and most risky areas of the market.