Species - Definition of Species. Definition: The term species can be defined as a group of individual organisms that are capable of interbreeding to produce fertile offspring in nature. 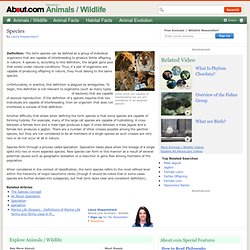 Sashiko: Traditional Japanese Sashiko Design & Instruction. They are not the same. 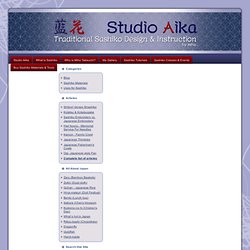 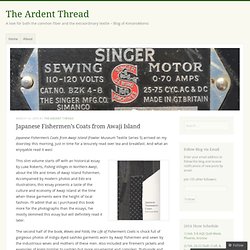 And what an enjoyable read it was! This slim volume starts off with an historical essay by Luke Roberts, Fishing Villages in Northern Awaji, about the life and times of Awaji Island fishermen. Accompanied by modern photos and Edo era illustrations, this essay presents a taste of the culture and economy of Awaji Island at the time when these garments were the height of local fashion. I’ll admit that as I purchased this book more for the photographs than the essays, I’ve mostly skimmed this essay but will definitely read it later. ANTIQUES; The Mystique Of Japan's Fishing Coats. Fashionistas take note: Madison Avenue may be pushing the equestrian look for next fall, but fisherman's style could be the next big thing. 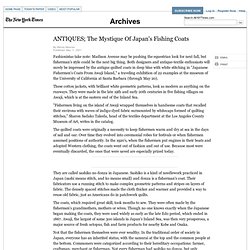 Both designers and antique-textile enthusiasts will surely be impressed by the antique quilted coats in deep blue with white stitching in ''Japanese Fishermen's Coats From Awaji Island,'' a traveling exhibition of 22 examples at the museum of the University of California at Santa Barbara (through May 20). These cotton jackets, with brilliant white geometric patterns, look as modern as anything on the runways. They were made in the late 19th and early 20th centuries in five fishing villages on Awaji, which is at the eastern end of the Inland Sea. The quilted coats were originally a necessity to keep fishermen warm and dry at sea in the days of sail and oar. Over time they evolved into ceremonial robes for festivals or when fishermen assumed positions of authority. Sashiko: Traditional Japanese Sashiko Design & Instruction.

Japanese Fishermen's Coats from Awaji Island. Awaji Island (Japan) Fisherman's Coats. Denimquest. April 7, 2011 natural dye class started up the indigo vat today, using lye & thiox, very strong chemicals, a vat can be whipped up in 30 minutes... whereas in ancient Japan, composting the dye and fermenting the vat took months. here i am trying my hand at rope dyeing, rotating the skane in the indigo vat like I've read about and seen in the Japanese dye videos (one example in the video below). the way indigo works is through oxidation with the air. there is a reducing agent in the dye vat that strips the indigo of its blue color and renders it white (appears yellow/green underneath the blue scum on the surface & on the fabric when first removed.) the fabric changes from yellow to green to blue in under a minute like watching those oatmeal bowls heat up in the microwave and change colors when you were a kid... yeaah. 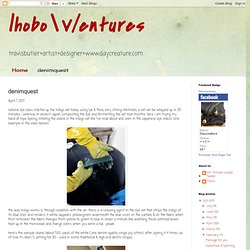 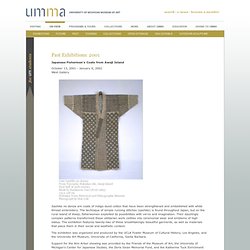 -1963) 133 x 126 cm Hokudan Town Historical and Ethnographic Museum Photograph by Don Cole Sashiko no donza are coats of indigo-dyed cotton that have been strengthened and embellished with white thread embroidery. The technique of simple running stitches (sashiko) is found throughout Japan, but on the rural island of Awaji, fisherwomen exploited its possibilities with verve and imagination. Their dazzlingly complex patterns transformed these utilitarian work clothes into ceremonial wear and emblems of high status. Sashiko. I visited the Collins Gallery at Strathclyde University recently to see the Sashiko Textiles Exhibition and it is utterly beautiful. 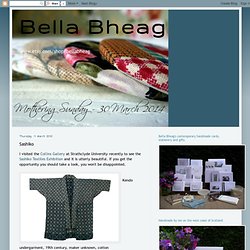