How was the Moon’s crust formed? - CBBC Newsround. Getty Images The Moon is made up of lots of layers including its thick crust, but have you ever wondered how it was formed? 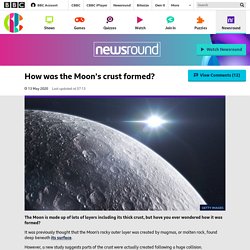 It was previously thought that the Moon's rocky outer layer was created by magmas, or molten rock, found deep beneath its surface. However, a new study suggests parts of the crust were actually created following a huge collision. "The discovery reveals that unimaginably violent impact events helped to build the lunar crust, not only destroy it," said Dr James Darling from the University of Portsmouth. It was previously believed that asteroids and comets colliding with the Moon only caused destruction, but this has now been debunked by scientists. What is a super worm moon and why does the Moon have different names? - CBBC Newsround. Getty Images A full November Beaver Moon rising above the top of Glastonbury Tor Blue Moons, Harvest moons, Supermoons, Worm Moons - there are lots of different names for different phases of the Moon, but did you know each month the full moon has a different name? 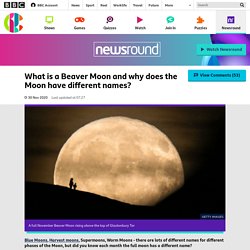 This month's full moon is known as a Beaver Moon and will be visible in the UK at 9:29am on Monday 30 November. Some say it is known as a Beaver Moon because Native Americans set beaver traps during this month, while others say it's because beavers build their winter dams around this time. Earth may have a second moon – Kiwi Kids News. How Does Orbiting Work? Have you ever stopped to consider the sheer number of objects in our universe? 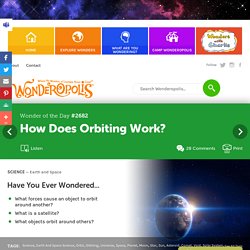 There are planets, like the one we live on. There are stars, like the one our planet is constantly revolving around. And then there are countless comets, asteroids, black holes, and other celestial bodies that fill the void we call space. China's Chang'e 5 Is Returning To Earth With Moon Rocks Kids News Article. China’s Chang’e 5 spacecraft, tasked with bringing lunar rock samples to Earth, successfully landed on the Moon on December 1st, 2020. 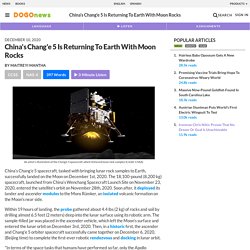 The 18,100-pound (8,200 kg) spacecraft, launched from China’s Wenchang Spacecraft Launch Site on November 23, 2020, entered the satellite's orbit on November 28th, 2020. Soon after, it deployed its lander and ascender modules to the Mons Rümker, an isolated volcanic formation on the Moon's near side. Within 19 hours of landing, the probe gathered about 4.4 lbs (2 kg) of rocks and soil by drilling almost 6.5 feet (2 meters) deep into the lunar surface using its robotic arm. The sample-filled jar was placed in the ascender vehicle, which left the Moon's surface and entered the lunar orbit on December 3rd, 2020. Then, in a historic first, the ascender and Chang’e 5 orbiter spacecraft successfully came together on December 6, 2020, (Beijing time) to complete the first-ever robotic rendezvous and docking in lunar orbit.

NASA's SOFIA Finds Water On The Moon's Sunlit Side! Kids News Article. The presence of ice in the permanently shadowed craters around the Moon's poles has been known for some time. 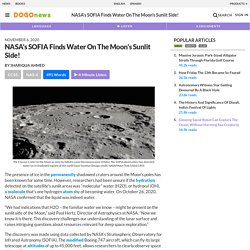 However, researchers had been unsure if the hydration detected on the satellite's sunlit areas was "molecular" water (H2O), or hydroxyl (OH), a molecule that's one hydrogen atom shy of becoming water. On October 26, 2020, NASA confirmed that the liquid was indeed water. “We had indications that H2O – the familiar water we know – might be present on the sunlit side of the Moon,” said Paul Hertz, Director of Astrophysics at NASA. “Now we know it is there. Armagh Observatory and Planetarium believes asteroid hidden behind Mars could be a chunk of Earth’s moon. A huge asteroid that’s following Mars’s orbit could be our Moon’s long-lost twin. 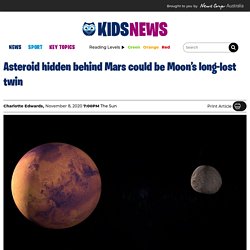 This is according to scientists who say the space rock has an identical composition* to some parts of the lunar surface. The researchers think asteroid (101429) 1998 VF31 could be a “relic* fragment of the Moon’s original solid crust”. Scientists used a tool called a spectrograph on the European Southern Observatory’s 8m Very Large Telescope (or VLT) in Chile to observe the asteroid. It allowed them to see how sunlight reflected from it and then they compared it to the Moon. “The spectrum* of this particular asteroid seems to be almost a dead-ringer* for parts of the Moon where there is exposed bedrock such as crater interiors and mountains,” explained Galin Borisov, an astrochemist from the Armagh Observatory and Planetarium in Northern Ireland.

We don’t know for sure why that is, but one theory is that the Moon and the asteroid have a similar origin or were once combined and then broke apart. 2. Did a huge collision between the Earth and a planet-sized rock create the Moon? - CBBC Newsround. Getty Images. 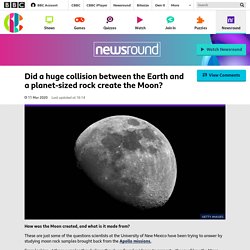 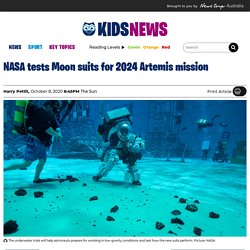 Photos of the trials at NASA’s Johnson Space Center in Houston, Texas, US show suit-clad* engineers walking at the bottom of a pool in several metres of water. The tests – which include practising picking up Moon rocks and planting an American flag – help astronauts prepare for working in low-gravity conditions. Could Our Earth Be Causing The Moon To Rust? Kids News Article.

Researchers have long been aware of the presence of rust, or hematite, on Mars caused by the chemical reaction between the iron ore on the planet's surface and water and oxygen from the ancient past. 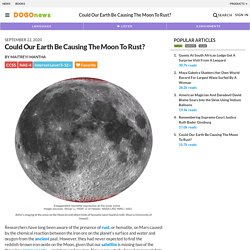 However, they had never expected to find the reddish-brown iron oxide on the Moon, given that our satellite is missing two of the three key components — moisture and oxygen. Now, a new study, based on recent data from India's Chandrayaan-1 Moon-orbiting spacecraft, suggests that the Moon is displaying signs of rust and it may be Earth's fault. The discovery of the rust is even more astonishing given that the Moon is constantly being bombarded with solar winds — which mainly comprise charged hydrogen particles — from the Sun's corona. Hydrogen is a reducing agent, meaning that it 'donates' electrons to the materials it interacts with. However, for iron to rust, an oxidizer — such as oxygen — that removes electrons needs to be present.

"At first, I totally didn't believe it," said Fraeman. NASA’s Artemis Accord sets out rules for the Moon. Australia is one of eight countries to sign up to a new set of international Moon rules, which include no fighting and no littering. 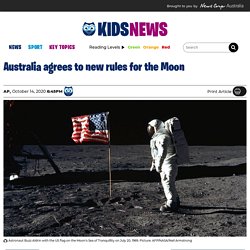 NASA released the guidelines this week for its Artemis Moon-landing program, based on the 1967 Outer Space Treaty (in which the Moon and other celestial* bodies are exempt* from national claims of ownership) and other agreements. NASA also included a no-trespass rule for the historic lunar landmarks such as Apollo 11’s Tranquillity Base, the site where Neil Armstrong and Buzz Aldrin landed Eagle on July 20, 1969. In addition to Australia, the other countries to so far sign the so-called Artemis Accords are the US, Canada, Italy, Japan, Luxembourg, United Arab Emirates and the UK.

NASA Administrator Jim Bridenstine said he expects more countries to join the effort to put astronauts back on the moon by 2024. MOON RULESRule No. 1: Everyone must come in peace. Other rules: Violators* could be asked to leave, according to Mr Bridenstine. CLASSROOM ACTIVITIES 1. 2. NASA announces Moon has more water than expected. NASA has announced the discovery of water on the surface of the Moon in more places and in larger quantities than expected. And for the first time, the presence of water on the Moon’s sunlit surface has been confirmed.

That’s good news for astronauts at future lunar bases who could use this water for drinking and making rocket fuel. NASA Spacecraft Finds Water On The Moon's Sunlit Side! Kids News Article. The presence of ice in the permanently shadowed craters around the Moon's poles has been known for some time. However, researchers had been unsure if the hydration detected on the satellite's sunlit areas was "molecular" water (H2O). or hydroxyl, a molecule that's one hydrogen atom shy of becoming water (OH). On October 26, 2020, NASA confirmed that that the liquid was indeed water. “We had indications that H2O – the familiar water we know – might be present on the sunlit side of the Moon,” said Paul Hertz, director of Astrophysics at NASA. “Now we know it is there. This discovery challenges our understanding of the lunar surface and raises intriguing questions about resources relevant for deep space exploration.” The discovery was made using data collected by NASA’s Stratospheric Observatory for Infrared Astronomy (SOFIA).

However, before you start packing your bags, be warned that the water concentration is extremely low — about 100 to 412 parts per million.